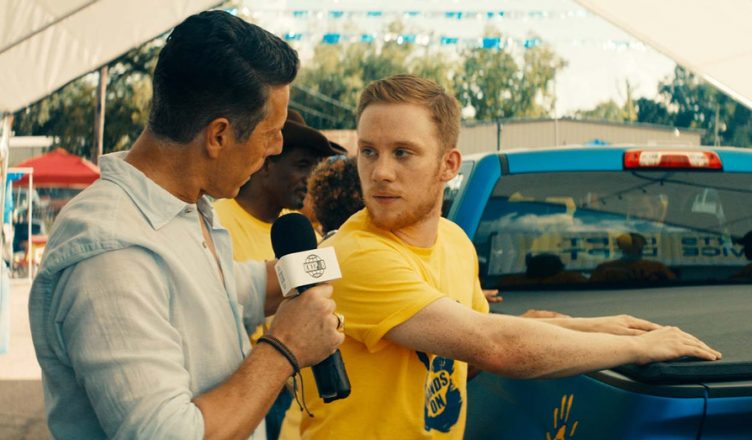 Writer-Director Bastion Gauthier  takes the topic of an annual endurance contest (Hands On) in Texas to win a pickup truck and turns it into a character study.  The contest promises thrilling entertainment to spectators and the chance of a lifetime for the participants, but it ends in real tragedy.

The contest organizer, Joan Dempsey, well-played by Carrie Preston, will be remembered by fans of television’s “The Good Wife” for playing Elsabeth Tascioni, a slightly off-beat but brilliant attorney. Carrie played the part in 14 episodes from 2010 to 2016 and won a Primetime Emmy Award for Outstanding Guest Actress in a Drama Series in 2013. She was nominated again in 2016. Joan is organizing the competition for Boudreaux’s Auto and Truck Dealership and she is very believable as a small-town employee of the car dealership.

The central contestant role is played by Joe Cole as Kyle Parson. Kyle and his wife and infant child are struggling, financially, and, as the script says, “He really needed a win.”

The rest of the cast of competitors who show up to try to win the truck by outlasting the others is a motley crew, with 20 people who seem to fit the bill  described as “poor white trash,” one of whom declares that what they are doing “isn’t rocket surgery.”

In addition to Carrie Preston, who is always good in her roles, the “bad guy,” Kevin, played by Jesse C. Boyd, becomes a central figure. There are a variety of types that we can recognize from small-town life, whether it is the completely self-absorbed ear-bud wearing guy beating rhythms to the songs that only he can hear on the truck’s chassis or the Bible-quoting Fundamentalist who occasionally requests that they all number off. We get a pretty good idea of the twenty competitors still standing, during the 119 minute movie, and there are those we root for and those we’d like to see quit or be disqualified—perhaps just on the basis of general nastiness.

The film won a special mention at the Zurich Film Festival and was a nominee for awards in Nashville.

#1) Cinematographer Michael Kotschi felt it would be a good idea to have the camera action be jerky at times, shooting forward down streets without any real attempt to focus. We can’t really call it “cinema verité (“Z”). It’s Cinema “F” [as in “Failed.”] The effect did nothing to enhance the film, but it did a lot to detract from it. I gave my GoPro camera to two eleven-year-olds to film a wedding over Labor Day; they did a better job of providing a film that is easy on the eyes of the viewer and captures the action. The only good thing is that Kotschi did this hand-held herky-jerky treatment primarily on shots of streets, not when we were focused on the inter-action of the contestants in the parking lot of the Hands On contest. My advice to Michael Kotschi: STOP THAT!

#2)  For reasons I do not understand Writer/Director Bastion Gauthier ended the film and then added 20 to 30 minutes of additional background on our male lead, Kyle Parson. The information conveyed to us at the END of the film, (when Kyle is no longer a factor in the competition to win the truck), helps us to understand the plot’s events. Adding the information at the end of the film was an odd and not very logical placement. It definitely belonged in the film, but chronological order would have been a better choice than tacking it on at the end.

#3) We never learn who won the truck.

I found the film to be interesting, aside from the three complaints mentioned above, but it had the potential to be more.