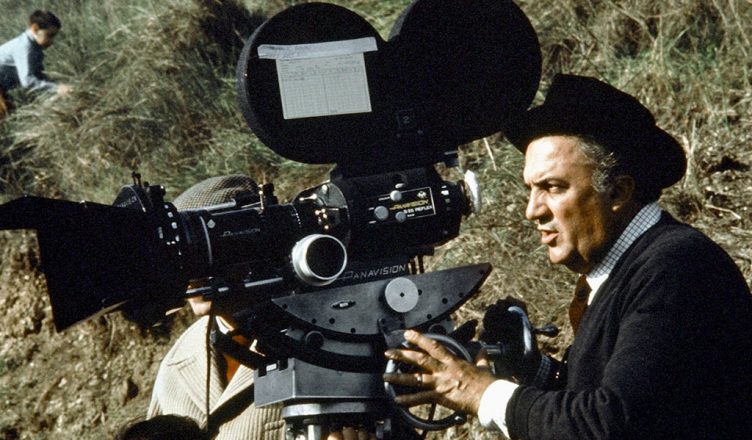 Meandering through Rome and Cinecittà, Gerald Morin, who worked with Fellini for over a decade, creates a 75-minute touching portrait of the man in “On Fellini’s Footsteps”, enriched by anecdotes from Fellini’s most important collaborators of the time. The write-up on IMDB says it  “throws us back to an era that is engraved in our collective memory.”

I’ve been reviewing film non-stop for 50 years, so, yes, I have the era “engraved in my collective memory.” I still remember the Anita Ekberg scene in the Trevi fountain in Fellini’s “La Dolce Vita”, and I recall that Fellini’s films were dream/nightmare fantasy experiences. Fellini was a visionary who “saw” exactly what he wanted to put on film, but he often didn’t “see” it util he arrived on set,  in a free form sort of creative inspirational style, of which one cameraman said, “We don’t know, the day before, how we will shoot. His mind is like a camera.”

Sometimes, Fellini would change the actors’ lines while they were filming. It was all in the service of inspiration and, as Fellini himself told a “New Yorker” interviewer (Lillian Ross):  “I am trying to free my work from certain constrictions—a story with a beginning, a development and an ending. It should be more like a poem with meter and rhythm.” It was Fellini’s devotion to being “in the moment” that often saw him go to bed with one idea and wake up with another.

Still, “8 and ½” (so named because that was how many films Fellini had made to that point) was named one of the 10 Best Films Ever Made and he was awarded a Lifetime Achievement Award by the Academy of Motion Picture Arts & Sciences in April of 1993, his 5th Oscar.

A talented artist, Fellini was constantly making sketches of both his sets and the costumes he wanted the actors to wear. Said Norma Giacchero, his script supervisor, “His sketches were very helpful.” His set designer said, “Fellini’s world was his own. The real world didn’t interest him.” Cameramen who worked with Fellini talked about his use of the zoom, which he employed while the camera was moving. He did this to change the focal distance and width of the shot. He worked by sequence and used the zoom in unusual ways, going from 50 mm. to 250 mm. long range.

Among the adjectives that his co-workers used to describe him were charming, obsessed, never satisfied, impatient, prompt and demanding. Still, many of his long-time collaborators mention his sense of humor and his “desire to dominate matter.”

“8 and ½” began shooting May 9 of 1962 and completed shooting October 14, 1963. Stumped by the plot, Fellini finally decided it should be about a director who no longer knows what film he wants to make. He described it as having past, present and conditional (fantasy) elements and it was soundly condemned by many, who considered it immoral. Still, it was nominated for the Palme d’Or and received 12 Oscar nominations, 4 of which it won, including Best Foreign Language Film and Best Costume Design in Black and White.

During this documentary, which was shot in 2013, a glimpse is shown of an ecclesiastical fashion show (red-robed Cardinals) where nuns and priests roller skate past shipwrecks of cobwebbed skeletons, scenes from 1971’s “Roma.” As a former colleague put it, “Nobody touches Fellini for bringing dreams to life.”

Although the film does not allude to Fellini’s fascination with and dabbling in LSD and Carl Jung-ian psychiatry after he fell into a depressive period, the films after 1963 often reflected those interests.

Fellini tried working with Hollywood stars (Broderick Crawford, a stand-in for the ailing Humphrey Bogart in the unsuccessful 1955 film “Il Bidone” and Donald Sutherland as Casanova in that film.) His collaborations with Marcello Mastroianni are best remembered. As contemporaries observed, “Marcello wanted to be Fellini and Fellini wanted to be Mastroianni.”