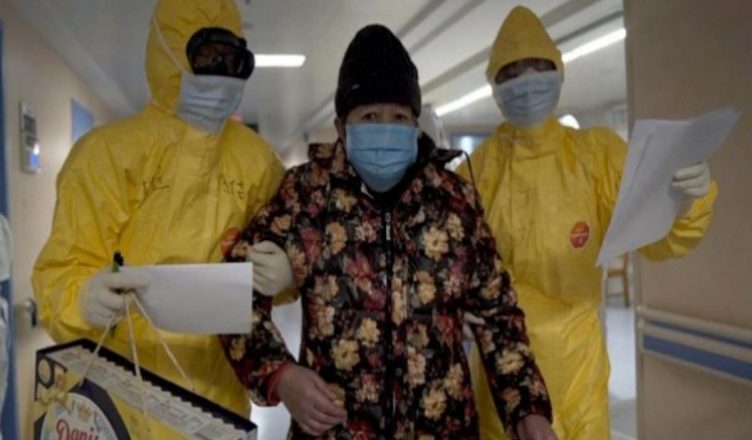 “76 Days” is a 93-minute documentary about the outbreak of Covid-19 in Wuhan, China, a film directed and written by Hao Wu, Weixi Chen (the cinematographer) and an individual who chose to remain anonymous. One wonders how the team managed to record this battle within a Chinese hospital and whether the anonymity is because the Chinese government might disapprove of the telling of this story.

The film is shot within the Wuhan Red Cross Hospital, beginning on January 23, 2020, in that city of eleven million people. The 76 days will end on April 8th and air raid sirens will mourn the dead in the city on April 4th. 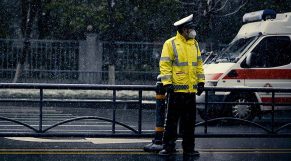 The documentary opens with a dramatic scene of sick people trying to crowd into the hospital from the cold, despite the institution’s 45 stated maximum occupancy for patients.  This siege will not end until April 8th, the lockdown that the city endured.

The patients seem to be primarily elderly, although one young girl, a hospital employee, is seen wailing throughout the opening scenes. She keeps saying “I want to say good-bye. I’ll never see my papa again.” We track the mourning family member outside, where she once again pleads for one last glimpse of her deceased loved one, who is being taken away in a hearse.

We see Dr. Wang exhorting his colleagues to “unite as a collective whole and win the battle to protect Wuhan.” One volunteer explains that he had “a hero’s dream to go support Wuhan.”

Mostly, the film is a testimony to the chaos that the epidemic has caused, with no hospital beds and resuscitation failing on several patients as the cameras record the desperate struggle. 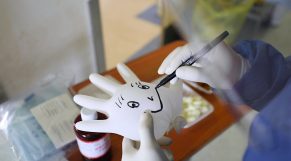 Some humorous relief is provided by an elderly man, referred to as “Grandpa.” Grandpa, who has dementia, will not stay in his room and continues to wander the hospital corridors, usually while muttering things like “I’m already one foot in the grave.” He cannot read and there is a heated phone discussion with his son about how long he has been an upstanding member of the Communist party. [His son seems to think he should set a better example as a proud Communist, but, instead, Grandpa is mostly crying in his room—when he’s not out wandering around and causing problems.] Even when the hospital is trying to release him back into the world, Grandpa starts wandering in the wrong direction, back into the hospital. The staff applauds when Grandpa is finally released upon the world.

In the midst of all this death, a young woman in childbirth (whose water broke 2 days earlier) must be delivered by Caesarean section. She had Covid-19, which she has passed on to her newborn daughter. We follow that drama through to the end as the child—a chubby female with a full head of hair whom the staff nicknames “the hungry penguin”— is whisked away to another area of the hospital and an incubator.

A box of cell phones collected from the dead and dying is introduced early in the documentary. It is at the end of the documentary that Yang Li, head ICU nurse, draws the unenviable duty of sorting through the abandoned phones and calling the next of kin to tell them to come pick up their dead relatives’ belongings. Usually,Yang Li seeks to return a phone to the relatives. One deceased woman’s bracelet is retrieved for her daughter, despite the fact that it is against regulations and the deceased, Grandma Luo Jinsong, had swollen arms at the time of her death, causing difficulty in retrieving the jewelry. 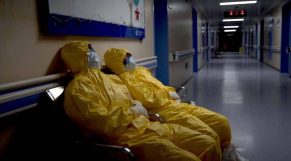 When she completes the task of returning the bracelet and the phone to a young girl who is sobbing, Yang Li expresses her condolences. She turns from the camera and appears broken, numb. It reminds of the line from earlier in the film, “How could it have come to this?”

The beleaguered hospital employees work tirelessly to try to save their patients and to preserve order within the hospital. I was surprised to hear patients being asked if they had “vomiting or diarrhea,” since neither of these symptoms received much air play on American television. I was also surprised to learn that ICU is emblazoned above the doors to the Chinese facility, much like Intensive Care Unit appears above these areas in American hospitals.  I assumed that all signs would be in the language of the country. There was also a much better degree of PPE in this Chinese hospital than during the early days of the pandemic in the U.S. and most of the doctors and nurses appear as masked and fully covered workers.

Writer/Director Hao Wu helmed “All in My Family” in 2019 and “People’s Republic of Desire” in 2018. His documentary about underground Chinese churches (2006) earned him a detention from the Chinese government. “76 Days” has had 3 wins on the film festival circuit: Best Documentary at AFI Fest, Grand Prize and Social Impact Award for Heartland International Film Festival, and 3 additional nominations, including at the 43rd Denver Film Festival. After premiering at Toronto, it will release on December 4th.