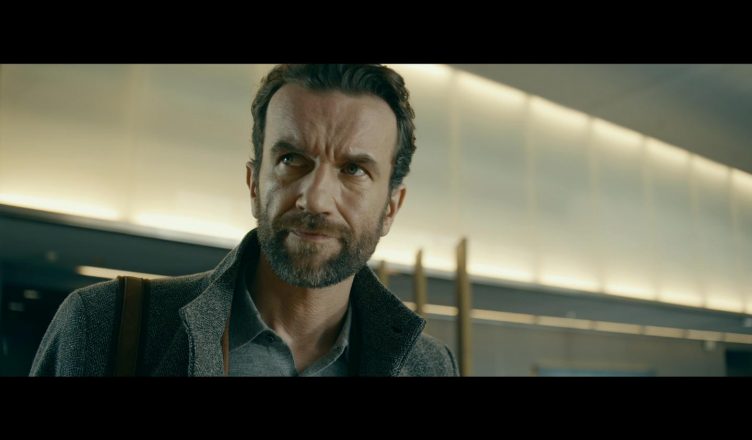 The intriguing film “A Perfect Enemy” starring Tomasz Kot (Cold War), was directed by 45-year-old Spanish-born director Kike Maillo. Maillo helmed the 2012 film “Eva,” when 37, and it won him the Best New Director award from the Cinema Writers Circle Award in Spain and an award for Best Special Effects (2012). This time out, the basis for the complicated story is a novel by Amelie Nothomb, “Cosmetiques de L’ennemi,” but the script was written by Maillo, aided by screenwriters Cristina Clemente and Fernando Navarro.

Architect Jeremiasz August has just concluded a lecture about architecture (“Perfection is when there is nothing left to take away.”) and is in a cab on his way to the airport.

Furthermore, it is an airport that Jeremiasz actually designed, with a beautiful model of his work in the center of a spacious waiting area.

Amidst a deluge outside the lecture, a young blonde traveler asks if she can share a cab with the architect. Tessel Textor (Athena Strates)—a petite blonde—does clamber inside the cab in the downpour and begins a non-stop barrage of information about herself. The Good Samaritan act of allowing her to share the cab causes both the architect and the young blonde to miss their flights, so their conversation continues—more or less—-in the VIP lounge of the airport.

August appears to be growing very tired of the non-stop chatter. There is some symbolism overtly explained. When Tessel first enters the cab,she explains that her name can mean “weaver of words,” although she is not a writer. (August tells her it’s not too late to start.)

There is a third character—a beautiful woman named Isabelle, who was married to August but disappeared  twenty years earlier. We see Isabelle (Marta Nieto) primarily strolling about a charming cemetery and, later, in her apartment. Her relationship with August is confirmed by photos of the couple that adorn her apartment.

Things begin to become very surreal and fantastical at the airport. There are clear signs that Tessel is “not right in the head” and her annoying monologue is beginning to irritate the reserved architect. There are several trips to view a model of the airport and the airport model has small changes occurring that involve small splotches of blood, etc. (Take note). The exchanges in the rest room(s) are even more central to the plot.

“Because you’re still on the plane,” responds Tessel. But that was not where we thought August was when he raised his voice, so settings are shifting and mysterious things are occurring; the endless stories that Tessel tells are beginning to form a mosaic of sorts.

The best comparison, for the viewer, to capture what may be going on in this film is to mention “Fight Club” and how it dealt with reality.

I enjoyed the film. First of all, it was well acted, (although Tessel would have been more convincing if she hadn’t been wearing 10 pounds of colored eye make-up in every scene (plus what looked like camouflage pajamas)].

Aside from that faux pas on the costuming, the principals carry out the somewhat confusing exchanges of dialogue proficiently, the music is good (Alex Baranowski), the sets are great, the cinematography by Rita Noriega is good,  while the ultimate resolution of the plot is clear. Another plus: the actors are all speaking English. I finally gave up on the subtitles of an Iranian film that was  to feature a burning theater. Did not make it through to the end of that one. Two hours of my life I’ll never get back.

Enjoyed this one all the way  through to its thought-provoking conclusion.