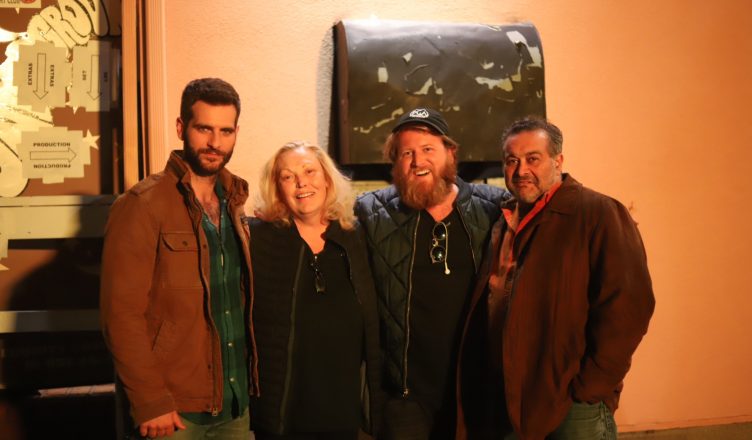 “Shooting Heroin” is a film from writer/director/producer/editor Spencer T. Folmar of Clearfield, Pennsylvania. It features a vigilante justice approach to solving the problem of young people shooting heroin and overdosing in the state of Pennsylvania. The film is set in a  remote area  in the middle of the state, where 10 teenagers a day were dying of the opioid epidemic back in 2018, the genesis of this film.

As a Pennsylvania native, Folmar had a personal stake in the film, shot in Pennsylvania communities with names like Clearfield, Altoona and Morrisdale. As he said during a video Red Carpet held on Zoom, “This film is very personal.  The area, itself, is like a character. We were trying to show the natural beauty and the grittiness of the area.” The area near the University of Pennsylvania has beautiful forests and caves utilized well by Cinematographer John Honore.

The description for “Shooting Heroin”  is: A small town community comes together to eradicate the heroin epidemic from its midst by whatever means necessary.

“Shooting Heroin” is currently screening on Vudu, iTunes, Microsoft, Comcast, Verizon and Amazon and, for a 90-minute film that was shot in 12 days in middle to late October on a shoestring budget  in the middle of Pennsylvania, it had some nice moments. The scenes with Cathy Moriarty were good and those between the Lieutenant (Garry Pastore) and Adam (Alan Powell) “worked.” Music by Mike Newport was fine and the cinematography by John Honore succeeded in putting the Pennsylvania countryside on display.

The cast was filled with Folmar’s relatives. The pharmacist with the long blonde hair? Leesa Folmar.  We learned during the virtual Red Carpet (via Zoom) that little Phil—a darling blonde child of about two—was actually Spencer Folmar’s nephew. Little Phil was such a good actor that, by the end of the shoot, he was holding out his arms for his onscreen Daddy (Alan Powell) and calling him “Daddy” (while his real father was in the next room).

I also learned that all-terrain vehicles really are that popular in Pennsylvania and that the house they burn down in the film had to be built in three days so it could be burned down, (after plans for the fire department to incinerate an old one already standing fell through).

I had never participated in a Zoom virtual Red Carpet. It was just as technically challenging as I feared it would be, but I finally succeeded in joining the merry band of about 5 cast members and 5 critics (some of whom had not yet seen the film).

I enjoyed Nick Turturro (playing a priest in the film) say, with wonderment, when asked about filming on location, “It’s a very different experience when you shoot outside of L.A.  It was very personal. You put me at your parents’ house. I got to meet your parents!” Turturro said the cast arrived 2 days before the 12-day shoot.

There was some conversation about Turturro’s collection of major league baseball jerseys, hanging on a rack behind him. (You don’t get that on the REAL Red Carpet!) At one point, Sherilyn Fenn’s daughter came into what appeared to be her bedroom to ask the “Twin Peaks” star a question during the Red Carpet. Lead Alan Powell defended his dumping Little Phil in the car seat of his car outside in the cold (my question) by explaining that he had five children, himself. (Not sure that was a convincing argument, but whatever…).

I have learned, firsthand, that it is quite easy to sit back and criticize the earnest efforts of anyone actually writing a book or filming a movie. It is obvious that there were enormous hurdles to overcome in shooting in the wilds of Pennsylvania on a budget of roughly $2 and ½ million. The cast succeeded, to varying degrees, in addressing a truly important problem—the opioid epidemic—an epidemic which has currently been overshadowed by the deaths of 16,000 American citizens during the Coronavirus (COVID-19) pandemic. The idea of doing something—-anything—to address unnecessary deaths in a community is a good one, but I question whether vigilante decision-making by 3 people with a score to settle is really the right way to go.

There were other problems with the plot, if you are examining it from the standpoint of a screenwriter. I have listed them below. Suffice it to say that the scenery was beautiful and the actors seemed to have formed a bond and become a family as they worked to realize Folmar’s vision. Some succeeded with their roles more than others, but not every time at bat is a home run (to use a baseball analogy that will make you long for a baseball game some time soon on your television set).

1) In one scene Adam (Alan Powell) goes to pick his son up from his drug-addicted sister Cheyenne, who is (supposedly) babysitting. They argue. Adam (Alan) walks out of the house with the small child.. Then Adam comes back in the house and argues with his sister, without his son. WHO IS WATCHING THE LITTLE BOY DURING THE ARGUMENT? It looks cold in Pennsylvania in all scenes. (You can see people’s breath in the scenes with Cathy Moriarty as mother Beth and Alan Powell as Adam). Where is the little boy during the argument? Surely not in the car, alone?

2)  During the comraderie scenes between Adam and Lt. Jerry Whelan (Garry Pastore—who was excellent in his role), do these two ever call an Uber? They’re out drinking and apparently driving from bar to bar. While we were never shown either of the two actually driving a vehicle, one of them is a police officer and I’m thinking they need to either call a cab or a Lyft or an Uber.! Later, the Lieutenant is awakened from sleep within the actual police station and he definitely looks the worse for wear. Between the non-stop smoking (Cathy Moriarty and Adam Powell smoke non-stop) and the drunk driving, I’m worried for the citizens of Whispering Pines.

3) The Volunteer Drug Force: [Yikes! ] Vigilante Justice half the time; confusing billboards the other half (rectified after remarks by one of the trio, Edward, to Hazel.)  [SPOILER: I actually did not know who “Hazel” was until after Hazel was dead. I tried to remember if her name was used and I just missed it—-possibly in the gymnasium sequence when she is addressing the students? I was very confused by Edward during most of the film.]

4) Whispering Pines. Spent a portion of the time wondering if “Whispering Pines” was the name of the television series town where Toby Jones was the evil Dr. Jenkins. (A: Wayward Pines). However, there WAS a 2018 movie called “Whispering Pines.” Noticed that the side of one police car said “Police” at the bottom of the door, but no name of a city. Later, many cities are in the credits (Altoona, Morrisdale, Clearfield, et. al.) Wondered why the writer/director didn’t just go with “Clearfield” or one of the other “real” towns?

5)  Was confused about the emphasis on All Terrain vehicles. Must be a big thing in Pennsylvania. Thought the odds of “Adam” running down a kid on an ATV vehicle in a jazzy mask and having him be the actual kid transporting drugs (Kind of a conspicuous outfit for it, don’t you think?) was odd. Found Adam’s behavior at different points (in the cave, during the stopping of the youth with drugs), to be almost bi-polar. (He threatened to KILL the young drug dealer. Yikes! Pretty split personality in the cave scene.) [The response during the Red Carpet event was that searching multiple ATV vehicles would have been tedious and “they would not have made the cut” and that the ATV chase scenes were among the most exciting, so I stand corrected on my remarks.]

6)  Was confused about the African American character’s (Ed’s)  motives and behavior(s).(Lawrence Hilton-Jacobs)

7)  Does vigilante justice in burning down the house seem reasonable? Cinematic, yes, but there didn’t seem to be enough evidence that this house and this individual were definitely the guilty parties.

Some of these questions were addressed during the Zoom Red Carpet; some were not.

See it for yourself while you’re sheltering at home. It’s an earnest effort. Cathy Moriarty is great. Garry Pastore and Alan Powell were believable. (Parrish told Powell that it was “a privilege to be in a film with you” and asked him “Did you expect the outcome to be so brilliant?”)

Not sure I’d have used the adjective “brilliant” but the Boo Birds on IMDB are being overly harsh. The film did have a nice attempt at a “twist” ending.  I bought into Cathy Moriarty and Garry Pastore’s portrayals of, respectively, the mother of the lead character and the local police Lieutenant.

We all can only hope that we can get a handle on epidemics of all kinds in the United States. While this film was not of “Ben Is Back” (Lucas Hedges, Julia Roberts) or “Beautiful Boy” (Timothy Chalamet, Steve Carell) quality—or budget—I applaud the director for investing so much of himself in “Shooting Heroin,” the movie, and in bringing attention to this problem.