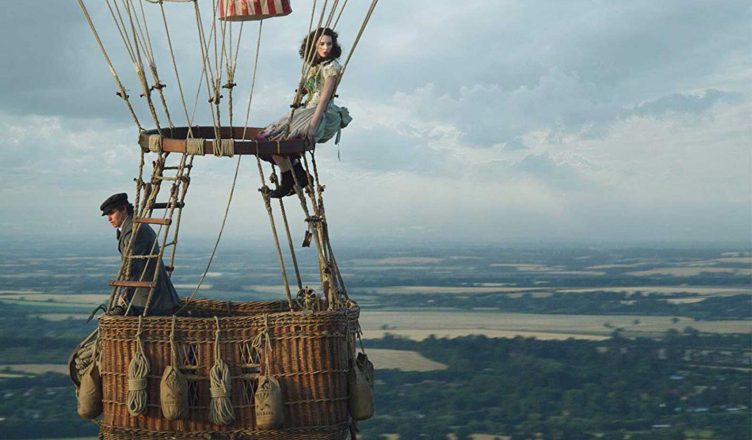 Eddie Redmayne, who won an Oscar for playing Stephen Hawkings in “The Theory of Everything,” and Felicity Jones, who played Jane Hawkings in that film, are cast opposite one another again in the Tom Harper directed film “The Aeronauts.” Hamish Patel—who was so good as the lead in “Yesterday”—also has a supporting role.

The film recounts the exploits of pioneering balloonists (aeronauts) in 1862 England. Felicity’s role as Amelia Wren casts her as “a wildcat,” as she explained in Toronto, who is fearless and, along with her late husband, Pierre, followed the dictate, “Surely the sky lies open; let us go that way.”

Eddie Redmayne recounted a terrifying story of a crash into a forested area on their first day of filming “The Aeronauts” and confided that Director Harper used some of their terrified screaming in the finished film. (“No use in having it go to waste,” said the director from the stage of the AMC Theater in Chicago on Wednesday, October 23rd.)

Redmayne’s character of James Glaisher wants to establish the science of meteorology and needs Amelia’s help to take to the heavens and record what happens, with scientific precision and intent. So, they do.

Based on the book “Falling Upwards” it is easily one of the most beautiful films cinematically (kudos to cinematographer George Steel) and the duo is able to attain a height of 37,000 feet (7 miles), shattering previous records.

Just as a precaution, if you are afraid of heights, this is not the movie for you! (The woman next to me literally covered her face for 75% of the film). Also, next time, take gloves, I’m thinking.