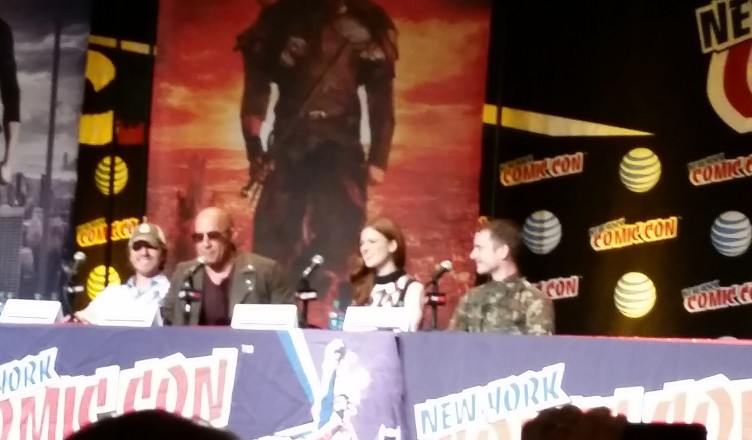 The fine folks at _ were kind enough to allow me to partake in the New York Comic Con’s panel for The Last Witch Hunter and I have to admit that it was one of the most enjoyable panels I’ve ever attended! Now let’s make one thing clear: Panel’s are little more than an opportunity for film makers to show off sizzle reel for upcoming movies. The great part about panels is the opportunity for fans to ask questions directly to those same film makers and get honest and genuine responses!

At the panel to promote the film were:

A few highlights are:

I even got to ask a question! Directly to the cast and I kept it pretty much related to the actual film they were there to promote!

I asked how Breck Eisner got involved with the film since I haven’t personally seen anything from the director since 2010’s The Crazies.

Breck was happy to answer! Breck, Elijah, and Rose honestly seemed a little bored on stage as everyone aimed their questions toward Vin. We can thank screen writer Cory Goodman for resurrecting the undead director and giving him a great opportunity to get involved with Vin Diesel and the Last Witch Hunter. Cory last worked on the 2011 film Priest and I think he and Breck would make a great combination for film. I personally think that this will be a great chance for the underrated director. I pretty much rate him right above Paul W.S. Anderson and right under Michael Bay in terms of style.