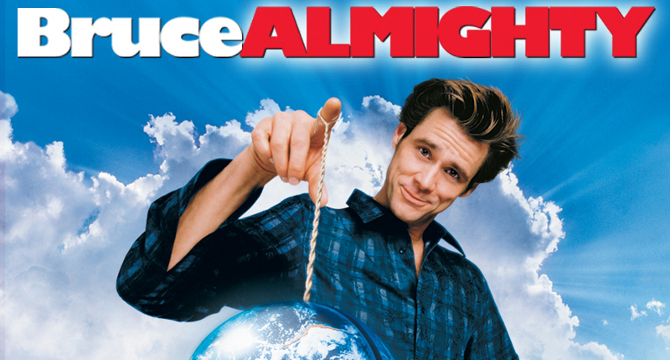 Bruce Almighty was a very fun film 10 years ago about a guy who’s given the opportunity to posses to the powers of God for an entire week. It was a pretty fun movie and had some decent laughs and even sparked a sequel/spin-off called Evan Almighty starring Steve Carrell. Well, it seems that Universal wants to resurrect this property and create a proper sequel with Jim Carrey in the starring role.

Jim Carrey is being eyed to reprise his role from “Bruce Almighty” in another sequel in that series at Universal Pictures says The Press Associaton.

Jarrad Paul and Andrew Mogel are penning the follow-up. As the entire project is still in early stages, there’s no word if Morgan Freeman would return to play God, or if Jennifer Aniston would reprise her girlfriend role from the original.

I’m game. That’s it. I liked this movie, I like Jim Carrey and have been bottom feeding to get my annual Carrey fix. Get him, Freeman, and hell maybe let Carrell in on the action and we have something well worth the price of admission.