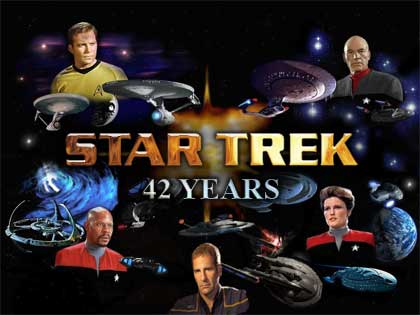 Star Trek, love it or hate it, has held the test of time. Despite its declining popularity, it still remains the second longest running science fiction franchise. (I was reminded that Doctor Who is 45) Nothing can compare to the history and spinoffs of this property.And today, Star Trek turns 42, facing its own rebirth next year. Hopefully it will revitalize the fandom, but lets take a look at where Star Trek has been, Wikipedia gathers:

Star Trek (Also known as “TOS”, The Original Series) debuted in the United States on NBC on September 8, 1966. The show tells the tale of the crew of the starship Enterprise and that crew’s five-year mission “to boldly go where no man has gone before.”

I am really looking forward to the Star Trek reboot next year (and its gaining a lot of positive buzz). After the sting of Nemesis, the series has no future without leaping another 150 years and placing the “Next Generation” in the history books. However, going back to the beginning (part of the charm found in First Contact, but never quite captured by the Enterprise tv series) is a wise way to bring in new fans and have a new story that is both familiar to the fans, and still not constricted by canon.

The fanbase is dying, if not dead. At the recent FanExpo there were very little Trek represented. I had thought with the upcoming movie, there would be some buzz, but not really so much. The series needs something to revitalize it and bring in new blood as well as reinvigorating the remaining fans.