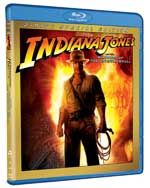 Just a couple weeks ago we talked about Indiana Jones and the Kingdom of the Crystal Skull was coming to DVD on November 11th but it appears that was not entirely accurate. Official release says October 14th – WITH BluRay version as well.

The two-disc Special Edition DVD and Blu-ray presentations feature hours of new content that opens up the world of Indiana Jones as never before through in-depth footage of Steven Spielberg and his cast and crew at work. From Shia LaBeouf’s training to become a master swordsman to Harrison Ford’s reunion with his fedora, whip…and Karen Allen as Marion Ravenwood, viewers will play witness to the magic of cinema’s greatest action-adventure hero’s triumphant return to the big screen, as well as the of the extraordinary work of legendary artists who brought Indy’s latest thrilling adventure to life.In addition, all four INDIANA JONES films will be showcased in the quintessential Indiana Jones collection entitled The Complete Adventure Collection, which will include the first three films plus the two-disc Special Edition DVD of the latest installment.

Well the original report was partial, so I am not surprised by the official release date. Also I presumed that this “just in time for Christmas” release will be a ploy to double dip for when the blu ray release came out, but I was only half right.

Now it seems there will be a delay for the Blu-ray two-disc Special Edition in a collection to get their bag of silver.