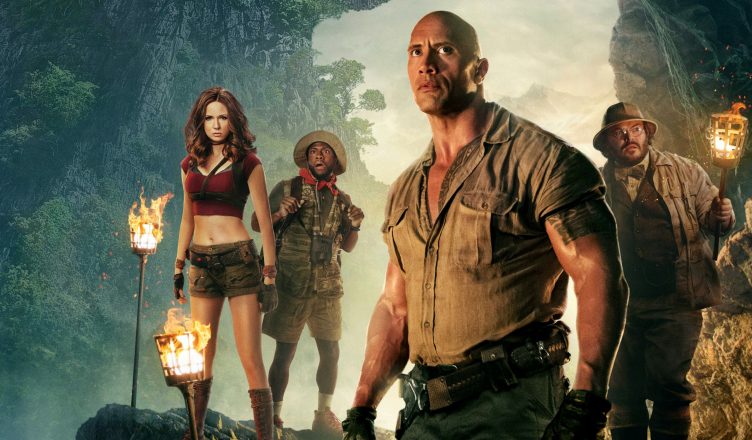 It’s very difficult to to separate Jumanji with the late Robin Williams. Naturally, in order to draw new interest into this sequel, casting the Dwayne “The Rock” Johnson was a no-brainer. Going into the film, a common expectation will be how does this Jumanji compare to the 1995 version.

The film has a couple of new and interesting concepts. One of those concepts is how the game adapts to the present time.  Through this “upgrade”, the movie itself is self aware to the point where it can relatable to a new generation. What I appreciated from this was that a new level of strategy had to be introduced in order to play Jumanji.

The “body swap” story angle was reminiscent of Freaky Friday (2003) or even Big (1988).  What made this plot work work was the funny way the adult actors were able to portray their actual teenage counterparts. Each character has their own individual traits that make their scenes stand out and be outright funny in most cases. Many of the jokes work very well for the characters due to the complete opposite dynamics of the the personalities they inhibit despite their new physical forms.

Dwayne Johnson is great in this film as he’s mastered the ability to be comedic and an action star at the same time. His “special strengths” were absolutely fitting and hilarious. Karen Gillan was charming, but yet humorous in her awkward scenes.  If you’re a Kevin Hart fan you probably won’t be disappointed as he’s essentially the same character as in other films. Without question, I think Jack Black probably steals the show as he plays a teenage girl stuck in a man’s body. Black’s performance probably will receive the most amount of laughs that the audience can “handle”.

I think one of the disappointing aspects of Jumanji had to come from its setting. Rather than the game being played in “the real world” and start to merge together, the game is entirely set in a in jungle setting. While some scenes were suspenseful, the sense of danger wasn’t always as thrilling. In the original Jumanji, we had the surprising and suspenseful situations of a lion randomly in your bedroom, or a rhino stampede in your living room. The danger set in the jungle settings felt a bit more staged rather than unexpected.

Despite the fact that this is all a game, I thought that the villain played by Bobby Cannavale was pretty bland. It made sense for the story, but he didn’t seem to pose a genuine threat for the characters. It almost felt as though if you were watching a video game being played on the “Easy” difficulty setting.

Overall I’d say Jumanji was an enjoyable, fun and entertaining film. Whether it lived up to the previous film is going to be up to the viewer. Personally, I think that both films excelled in different areas. Rather than having the environment be the gimmick as in the 1995 film, this new film focused more on the individual characters. Essentially it was just a trade off, but one that works.

I kind of wished that this Jumanji was rated PG the same way that the 1995 was rated. However, with the PG-13 rating, it probably will appeal more so to the fans of the original and teens. With some of the suggested mild “adult humor”, it may not be the most family friendly movie for all ages. (I probably wouldn’t bring my 10 year old daughter to watch this, mainly because I don’t feel like having to explain to her all of Jack Black’s Jokes. )

Jumanji is worth the watch in theaters, and feel free to check it out in 3D too.