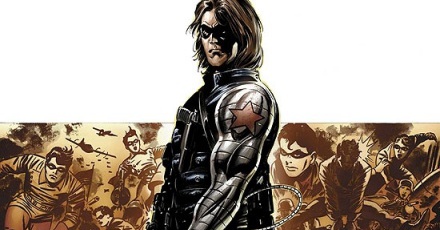 And in a single headline Mr. Johnston has become a person of extreme interest. Ya see, I’ve been hoping for either a suggestion or outright inclusion of the Winter Soldier storyline for months now. I think it’s a fantastic companion story to accompany the main Captain America movie. Joe Johnston Agrees.
Source: /Film

I told the Marvel guys that there is a character that I’m really interested in called ‘The Winter Soldier’ and that if, ‘you guys decide to make that picture I would definitely be interested.’ It’s the ‘Bucky’ Barnes story. We talked about ‘The Winter Soldier’ which is the continuation of what his story is. It’s basically that he is captured by the Russians and he’s brainwashed and turned into an assassin. But you know there are a thousand ways to go with that. I just think that it would be interesting to take a character that was in ‘Captain America’ and build a story around him. Plus, I like Sebastian Stan a lot (who played Bucky) I think he would be an interesting actor to build another feature around.

What a smart guy. The story is really compelling and really only developed in the comics in the last 6yrs or so, which is like 2 hrs in comic book time. Bucky was revised and re-fitted after decades of overlook as a simple, and wholesome, sidekick. His new continuity is really interesting for fans of comics like myself:

In the Ed Brubaker version, Bucky was an orphaned kid who lived on the military base where Steve Rogers trained for the Super Soldier program. He was a great, vicious fighter, and only a few years younger than Steve Rogers. Bucky ended up being the wetworks guy for Cap’s team – the pointman who could take out enemies with extreme prejudice. As Cap, Steve Rogers wore the flag and busted heads, but Bucky was instrumental in getting the job done. His death wasn’t quite what it appeared to be, however, as his body was recovered by a Russian military team and eventually turned into a secret Soviet agent who could pass as an American and take out elusive targets: the Winter Solider.

I really like the idea of Bucky pulling the trigger. Heck, who knows what he could’ve been doing when Cap wasn’t looking, not to mention all that time after Cap had been M.I.A, and he’d been working as a Russian agent. Lot’s and lot’s of great stories here with it culminating with the character ultimately taking the Captain America mantle for a bit. And let me not even get into his… encounters with Wolverine. That’s a movie in and of itself.

7 thoughts on “Joe Johnston wants a Winter Soldier movie too”