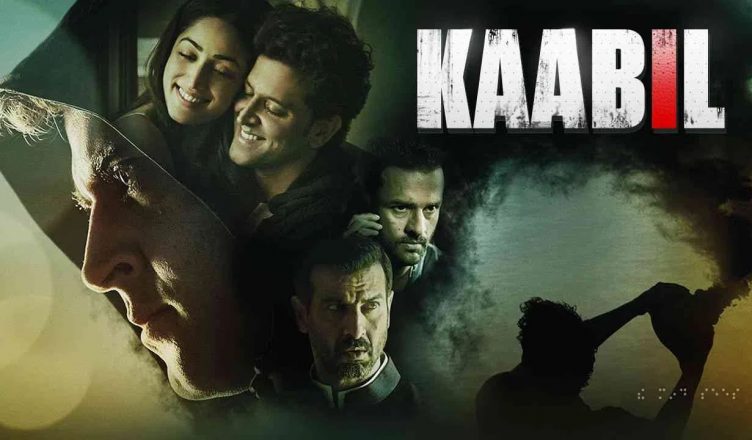 As the saying goes “If you kill my cat, I will kill your dog”. Director Sanjay Gupta along with producer Rakesh Roshan has brought a tragic action thriller to the big screens, whose story is provoking enough to make you go red with rage. “Kaabil” translated as “Capable”, features Hrithik Roshan, Yami Gautam, Ronit Roy and Rohit Roy in the lead roles. If you happen to listen to the story, I am pretty sure you may experience a sudden fit of anger like I did after I watched this movie!

But their happiness was short-lived. The beautiful Supriya falls in the notice of a local goon named Amit Shellar (Rohit Roy), who also happens to be the younger brother of a corrupt politician Madhavrao Shellar (Ronit Roy). One night when Rohan and Supriya were returning home after dining out, Amit and his friend Wasim (Shahidur Rahman) take advantage of the couple’s blindness and openly misbehave with Supriya in front of Rohan.

The very next morning when Rohan went out to work, Amit and Wasim sneaked into the house and brutally raped Supriya. Rohan calls the police and to his shear bad luck, his case gets handled by a corrupt police inspector named Amol Chaubey (Narendra Jha). Chaubey, as corrupt as he was, was not at all interested in handling the case and he asked Rohan to get his wife medically examined within 24 hours in order to prove the rape case. While returning from the police station, Rohan and Supriya get kidnapped by Shellar’s goons and are held captive for 36 hours before they are set free.

But this was not all! After the negligence from the police, the couple tried to live their lives normally. However, Amit’s lust for Supriya wasn’t over yet. When Rohan went out to work, Amit sneaked into the house once again with Wasim and gang raped Supriya the second time! Following this incident, Supriya opted for suicide. When Rohan returned home from work, he found her corpse hanging from the ceiling.

The helpless Rohan sought help from the corrupt Chaubey and even this time Chaubey turned him down. After facing disappointment from the police, Rohan now takes the matter in his own hands and begins the quest for vengeance. He tricks the goons by luring them into some places by changing his voice each time when he phone called them. Remember he is a voice-over artist!  First he kills Wasim and then Amit on separate occasions. Inspector Chaubey suspected that Rohan was behind these murders and put him under house arrest.

Madhavrao goes mad with rage over his brother’s death and asks Chaubey to hand over the murderer to him. In fact, Chaubey knew everything! He was only a cash-gobbling puppet of Madhavrao. Madhavrao didn’t have even the slightest idea that the visually-impaired Rohan could be behind these murders.

Rohan now calls out Madhavrao openly to some high-rise building and a tremendous fight endured between the two. Madhavrao was killed after he was thrown by Rohan from the top of the building. With no evidence against a blind man like Rohan, Chaubey had no option other than shutting down the case. Rohan completes his revenge and walks out free. The final scene shows him scattering the ashes of Supriya in the sea.

Another dialogue of Rohan goes “Har khudkushi karne wale ka kaatil zaroor hota hai”, which means “there is a murderer behind every suicide”. I personally find these to be very impactful indeed.

Hrithik Roshan has set the boundaries with his unparalleled acting. Starting from being a master voice-over artist, a loving husband and an expert fighter, his character Rohan in the movie has it all! I truly believe that he has the capability to become a comedian, a romantic hero as well as an action hero all at the same time!

Apart from Hrithik, my appreciation goes to Rohit Roy as well for instilling a sense of anger in my mind which any other villain could not have! He really did appear to be a sexual predator in the movie in spite of being a very respectable person in real life.

The impact of the plot

I also believe that the story of Kaabil is emotionally affecting enough to make anyone rise from their seats. After all, you don’t come across some tragic incident like this in a movie very often. It’s the storyline which sets this movie apart from many other tragic thrillers in Bollywood.

The plot looses logic as it proceeds!

I mean, you won’t ever come across another blind man who fights like Rohan! Rohan fighting like a WWE superstar in spite of being blind made the plot somewhat illogical. It is true that blind people can move around freely by sensing things around them. But seeing Rohan’s sensing capabilities made me wonder if he is equipped with some superpowers?! Can a blind person fight a “No Holds Barred” match with a normal guy and even kill him? In spite of being blind, he kills Wasim, Amit and Madhavrao single-handedly in one-on-one fights! These looked really absurd to me!

Is this the face of Indian law and order?

I don’t mean to say that whatever has been shown in Kaabil is wrong. In fact, it’s a truth that such practices do happen in India where if you have money power, you can make the law and order your slave! However, I feel that exposing this loophole in the Indian law and order system to the world might not have been a very welcome idea.

Kaabil sports a beautiful cinematography by Sudeep Chatterjee and Ayananka Bose that impeccably captures the essence of romanticism and vengeance. However, I think the editing could have been done better by Akiv Ali so as to remove the exaggeration of Rohan and Supriya’s love life in the beginning. This in turn could have helped in reducing the monotony to some extent. Apart from the artistic cinematography, the item song “Sara zamana haseeno ka deewana” meaning “The world is crazy for beautiful women” which featured actress Urvashi Rautela, added to the glamor.

Overall, I feel that Kaabil is not a movie which everyone can take! The violent fight scenes and murders shown in the movie are not suitable for kids. I even believe that older people above 60 might not be able to take the horrific incidents that have been shown in the movie. Even if this movie is fictional, I won’t term this as an “entertainer”. Believe me, you won’t find the courage to watch this movie a second time solely because of the terrible and tragic incidents that have been shown. This movie is shocking enough to take away every bit of entertainment from your mind and in turn make your eyes pop out with anger! Even I had the same feeling when I walked out of the theater after watching this movie in 2017. The emotional impact which Kaabil creates in the minds of its audiences makes this movie a hit among many hits in the Bollywood film industry. 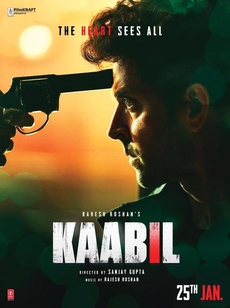