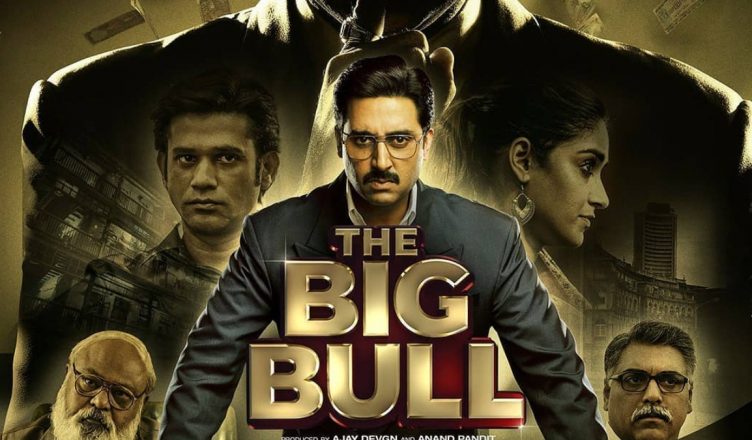 The Indian securities market was struck by a major scam during 1992 which was initiated by stockbroker Harshad Mehta. Bollywood’s new crime drama The Big Bull, co-written and directed by Kookie Gulati, brings this scam issue into picture.

The Big Bull is a true story which is based on the life of Mehta and depicts how he put his scammy plans to work. It features Abhishek Bachchan in the lead role. Abhishek plays the role of a salaried middle-class man named Hemant Shah who dreams to become India’s first billionare. Hemant enters the world of stockbroking to become a seasoned stockbroker. Abhishek’s character Hemant is actually the impersonation of Mehta. The Big Bull portrays how Hemant plans and scams the stock market in India and makes billions in the process. We can see Ileana D’Cruz play the role of a news reporter named Meera Rao, who in fact represents the famous journalist Sucheta Dalal who investigated Mehta’s scam case. We also have Nikita Dutta playing the role of Hemant’s wife Priya and her character in fact signifies Mehta’s wife Jyoti Mehta.

As Hemant rose to fame and riches, he made enemies too. It’s only a matter of time till we see his downfall at the end which is similar to that of Mehta. However, don’t let the stock of your expectations soar too high as in spite of its terrific plot, The Big Bull might not be as impactful upon its audience.

I personally liked Abhishek’s con man image in The Big Bull. His con image appeared more like a common man to me, neatly suited with big spectacles. In fact, his character does remind me of his 2007 Guru image which was a big hit. He does seem to carry an aura around himself upon seeing which one can surely tell that he is capable of deceiving anybody. His overall performance in the movie is mind blowing and that’s the only thing I enjoyed in this movie.

I feel Bollywood does have the habit of putting in too much melodrama to actual stories. The Big Bull faces the same issue and I find some scenes to be too much dramatic. I don’t know how Harshad Mehta was in real life, but upon seeing the high speed car action scenes in this movie, I can say that Mehta himself was surely not involved in such intense action. I feel Abhishek’s Hemant character which signifies Mehta was exaggerated a bit too much.

I also found the dialogues in The Big Bull to be ineffective which do not propel the characters to their fullest. Take for instance a Hindi dialogue from the movie, “humare paas bhagwaan se bhi zyada paise hain” which means “I have more money than God”. This sounds absolutely dull and meaningless. Abhishek played his role very well, however his repeated loud and fake laughter shots also made things a bit unusual. To be honest, there also seemed a lack of chemistry between Abhishek and Nikita and their sudden oddly-placed love song “Ishq Namazaa” did slow down the pace of the movie.

I found the cinematography of various Mumbai locations done by Vishnu Rao in The Big Bull to be just about alright. In fact, I believe the cinematic work was done to perfection to present Mumbai or then “Bombay” as it was during the 1990s. I also appreciate the nice editing done by Dharmendra Sharma as the shots looked to me to be put on perfectly to match the screenplay. However, I think Abhishek and Nikita’s oddly-placed love song made the perfect soup a bit sour.

Apart from Abhishek’s exceptional character performance, Ileana’s news reporter image looked promising too. She really did appear to me as a serious and determined journalist who was bent upon exposing Hemant.

Overall, I think this Abhishek Bachchan starrer might be an exaggeration of Harshad Mehta’s image, still The Big Bull looks to be a pretty entertaining piece simply owing to its awesome plot.