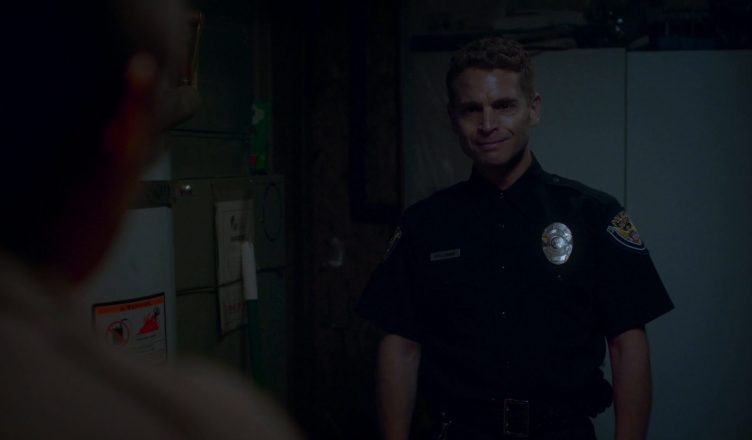 PLOT: A rookie cop trapped in a mid-80s police training video by an omnipotent and malicious Narrator (Keach). CAST: Stacy Keach, Vayu O’Donnell (80/20), Ericka Kreutz (This Is Us, The Handmaid’s Tale), and Spencer Garrett (Once Upon A Time… in Hollywood). DIRECTOR: Quinn Armstrong

“Survival Skills” investigates the fictional life of a rookie cop named Jim on and off the beat in the form of a decades-old training video for newbie police officers. We get a gradual but pronounced shift in gears as the protagonist, initially naive and gung-ho, becomes increasingly aware of what his job entails in our real world of evil that humankind can and does inflict upon each other.

“Survival Skills” is an unusual story, atypically presented, and really tough to define in terms of tone. A couple of questions spring to mind here. What law enforcement research went into creating this script and film? What is the artistic statement Writer/Director Quinn Armstrong is delivering regarding the police profession in America? Armstrong has not responded to a request for an interview.

A dear friend of mine recently retired after years of service with the Houston (TX) Police Department. While he experienced several violent situations during his exemplary career, he and his brothers and sisters in blue are trained to defuse in every situation they may encounter, no matter how potentially volatile. He echoes the common theme that most cops are great at what they do to serve the public and preserve peace and safety. Still, there are those who give their far-too-often thankless occupation a black eye. As there are among filmmakers. Lawyers. Plumbers. Film reviewers.

Do you believe that most cops are “good cops”?

Do you believe that most cops are “good cops”?