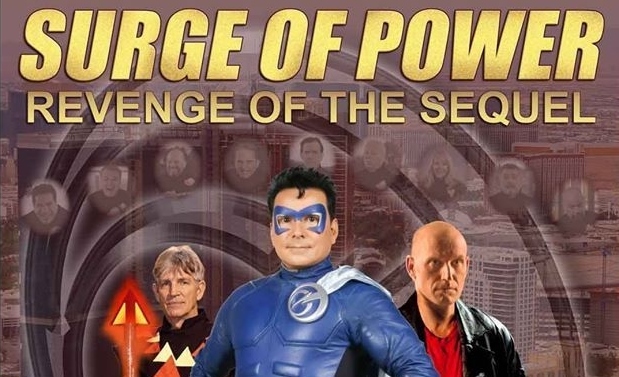 Full disclosure. This lad is about as far from a superhero fan boy as it gets.   Not a villainous vendetta of any variety. Just doesn’t crease my cape is all.

Which brings us to the jokey genre satire “Surge of Power: Revenge of The Sequel”, assumedly the first openly gay superhero flick ever made. If you’re jonesin’ for a journey through the Marvel Universe or the next dark dive into the “Batman” franchise, best quest elsewhere, comics crusaders. But if fun, farce and female impersonators floats your boa, then surge on.   This alternative may play perfectly with your lifestyle.

Vincent Roth is the creative curator and star of “Surge of Power: Revenge of The Sequel”. I talked with Roth about his off-beat homage to heroes on high.

Yes, one of our tag lines, that actually came from a British news outlet is, “cinema’s first out gay superhero.”  Some have said we could drop the “out” because there have not been any gay superheroes in the movies or on TV before Surge.  The first gay superhero to show up in comics was in 1985, a character called Extrano in a DC comics title “The New Guardians,” later followed in 1990 by the more known Marvel character Northstar of the comic book “Alpha Flight.”  However, there were no cinematic gay superheroes until Surge when the first movie, Surge of Power: The Stuff of Heroes, started screening in 2004 and then was released in distribution in 2006.  After all these years, and 4 movies later, no one has identified a gay superhero in movies or TV before Surge.

I’m going to assume you are a genuine fan of conventional superheroes, Vincent. If so, who are some of your faves in the field?

Yes, I grew up watching the Super Friends cartoon, which was about the Justice League of America and then started buying their comics around 1979 at my local 7-ELEVEN.  Green Lantern was my favorite superhero, whom I also saw on the Super Friends and then started buying Green Lantern comics as well as the Teen Titans.  So, I was mostly a DC fan.  I followed a few Marvel titles for a while like X-Men, but mostly DC Comics.  Another favorite of mine was Firestorm, another DC character who had his own comic book for many years and appeared on the Super Friends in animated form during its last two seasons.  I’m delighted to see my favorite superheroes showing up in live action.  The Green Lantern movie with Ryan Reynolds didn’t do so well.  The Justice League movie had a meager splash, but is getting a new life with an expanded movie on HBO Max this year.  The Titans TV show, based on the Teen Titans, seems to be doing well, going into its third season.  Even my lesser known favorite, Firestorm, enjoyed a live-action run for a couple of seasons on the CW’s Legends of Tomorrow TV show.  While Surge did not start off in a comic book like many other superheroes, the first movie, Surge of Power: The Stuff of Heroes, shows a fan at San Diego Comic Con roaming the aisles and happen upon a “Surge of Power” comic book that he starts reading, which takes the audience into the movie world of “Surge of Power.”  The comic book is just a prop in the movie, but at some point, probably after a few more characters are introduced in the next movie, we will explore doing an actual “Surge of Power” comic book.

“Surge of Power: Revenge of The Sequel” carries a message. Acceptance of who we are is, or should be, universal. Amidst all the comedic commotion, it clearly matters to you that this resonate in your film. Please share your thoughts in this regard.

When I was making the first Surge of Power movie, I wanted to distinguish the movie in two ways.  First, I wanted to bring back campy fun of superheroes, a little bit in the spirit of the “Batman” Adam West TV show, which also led to our penchant for getting celebrities to do cameos in the Surge of Power movies.  Second, if I was going to make a feature film, I wanted Surge to be gay, because, as noted earlier, there had not been a gay superhero movie, although I kept hearing genre fans asking for one.  Over a decade later, Marvel stepped into the campy fray with its Deadpool movies with Ryan Reynolds and now DC Comics has followed up with their own campy superhero in the recent SHAZAM! movie.  So, thankfully Surge’s distinguishing feature is that he is the only openly gay lead in the movies.  I found humor to be a good vehicle for mainstream audiences to enjoy gay characters, like the popular “Will and Grace” TV show that ran for 8 seasons and then was brought back for 3 more seasons.  So, I felt a comedy would be a good way to introduce Surge to mainstream audiences.  It seems to have worked, because we have 4 movies now – 2 feature films now in distribution and 2 short films currently screening (to the extent movies can screen during this pandemic) and I am now in pre-production for a 5th movie.

The tag line “Make a Difference Where You Can” is used throughout the Surge of Power movies.  As you picked up, I am sending a message to genre fans in hopes that I inspire them to make a difference, which could express in various ways, but I hope on some occasions will look like tolerance, greater acceptance, or standing up for the underdog.  These are well known concepts in the superhero genre.  In fact, science fiction is already a landscape where people tend to have broader minds – they are contemplating super powers, space craft, alien life civilizations and time travel.  So, I think genre fans are already more inclined to be accepting.  My hope is that the Surge of Power movies will help mainstream audiences be even more accepting.  Again, if I was going to put out a feature film, I wanted it to do something meaningful.

I was really encouraged by one aspect of your story in particular. So often in the motion picture industry the stock caricature of Christians is of prejudicial, intolerant, holier-than-thou mentally vacuous miscreants.

I am a Christian. This does not describe me. Not even nearly.

Your movie seems to go out of it’s way to avoid this puzzling and abjectly demeaning stereotype. The phone call between father and son near the end of the film is an especially poignant example. Would you comment on this dynamic from a personal perspective?

I, too, am a church going Christian, which is why Gavin, Surge’s alter ego, is shown subtly as a Christian in the first movie, Surge of Power: The Stuff of Heroes.  Fans had regularly asked to see more about the Metal Master, and I noticed that villains seemed to be the focus at that time in superhero movies.  People seemed to want to know why a villain turned evil and audiences seemed like they wanted to sympathize with the villains.  So, for the sequel, I wanted to give fans what they wanted, and explore the Metal Master’s background.  Since Surge was already revealed as Christian, I had Metal Master be Jewish, and we get introduced to Hector Harris’ homophobic parents, Helen Harris and Harold Harris, played by Linda Blair (The Exorcist) and Gil Gerard (Buck Rogers in the 25th Century).  I tried not to be preachy, but I wanted audiences to see how religion can harm families, and in Hector’s case, harm society because Hector turned his family’s rejection into a resentment he took out on society as Surge’s nemesis, the Metal Master.

I think Linda Blair has the most powerful line in the movie when she, as Helen, says to her husband, Hector, “God made man, but man made religion,” as Hector struggled with what his upbringing taught him about gay people.  I recently heard someone say, “a spiritual person will do the right thing, regardless of what they are told, but a religious person will do what they are told, regardless of what the right thing is.”  Had I heard this when making Surge of Power: Revenge of the Sequel, I probably would have woven this into the dialogue.  I think it’s far too common that people cannot separate spiritual principles from what are obviously man-made conventions in religion.  As a fellow Christian, you know we call this “discernment.”  Just as guns can do harm and do good, scripture can also be, and has been, weaponized by man giving biased interpretations of passages.  In Revenge of the Sequel, I did not want to go down the path of Christianity, since Surge was already shown to be Christian, and I thought Islam was probably a bit too far down a political path than I wanted to go, so I decided Metal Master and his family would be Jewish.  Since Judaism and Christianity are so similar, I thought the concept of religious based homophobia would still carry over to the audience.

I, myself, had a very accepting family when I came out and I enjoy a very accepting work environment, but I have seen many friends, classmates and coworkers have less positive environments.  I have also seen how homophobia has affected many of them, translating into personal and relational issues in life.  This is what I wanted to express in the Metal Master’s character.  I wanted the audience to see how Harold’s and Helen’s rejection of Hector had dire consequences – their son, Hector, turned into a supervillain terrorizing society time and again.  I also felt this needed reconciliation to have a successful story arc for Hector.  So, in the movie, Helen came around sooner, with Harold still struggling.  As you noticed, toward the end of the film, Harold was moved enough by Helen’s words that while he was still uncomfortable, he made a very big step in calling Hector after 20 years of not speaking.  During that call, Harold invites Hector over for Passover, which in the Jewish community is a big sign of acceptance – those invited for Passover are considered family.  This was a huge step for Harold, and this reconciliation is the story arc for Hector.  Now, experiencing acceptance from his family, maybe Hector will give up his Metal Master life or do something good in the future.

You’ll find “Surge of Power: Revenge of The Sequel” on Amazon, iTunes, VUDU, Google Play and YouTube Rentals, and by visiting: https://www.surgeofpower.org/availability/