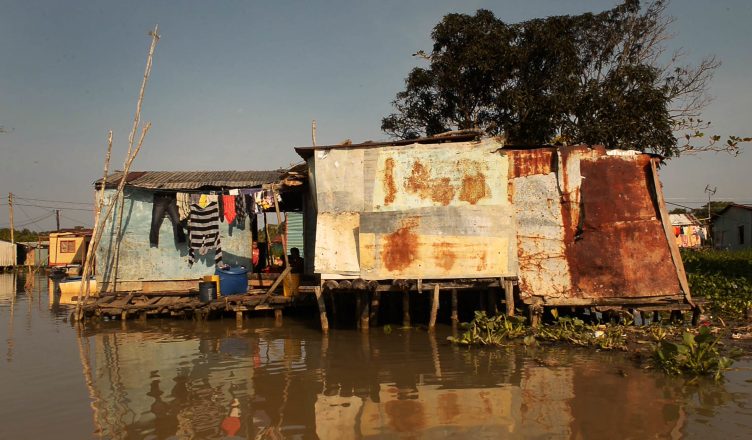 “Once Upon A Time in Venezuela”  showed at the 43rd Denver Film Festival and was helmed by Annabel Rodriguez Rios and Sepp R. Bruderon (editor/writer). They visited the remote village of Congo Mirador many times over the course of years, watching it shrink from a village with population of 700 to 30 families and, ultimately, to an abandoned village. Originally, as Director Rios said in an interview, they stumbled upon the village as subject matter when the crew was there to explore the mysterious lightning that appears, without thunder.

Upon learning of the village’s dwindling population, Rios sought out one resident of the village to represent the party line and one non-party member, the local teacher.

Chief among the inhabitants of the village is Tamara Vilsamil, who is a rabid Chavez supporter. She is doing quite a bit better, financially, than the rest of the village and is totally corrupt. She brags, at one point, that she owns 50 hectares of land and that it is “as good as money in the bank,” saying that she can always sell a cow if she needs money. She does not like the local schoolteacher, however, and arranges to have her fired.

Several old-time residents of the city on stilts talk about “the fatal night,” which, they say, has come. One older man relates how he grew up there with his 5 brothers and fathered 12 children there, but, by film’s end, the city is no more. Throughout the time that the documentary is filming sedimentation continues to plague the village and there are remarks like “sedimentation is killing us all.” Congo Mirador is the source of oil and many animals (fish, turtles, birds) in the area are coated with the black, sticky stuff. Hygiene seems to be one (of many) problems that the watery city faces; there is a sense of a sick patient that, like a goat shown in the film, is on its last legs.

The backdrop of the documentary is an upcoming election. At one point, ring-leader Tamara says, “I’m going to get our comrades and kick their asses.” There is a lot of talk about North American government planning to take over the town and the nation, as well as a lot of jingoistic talk about “the Fatherland.”

Near the end of the film Vilsamil and another representative from the watery town journey to Maracaibo. She says, “Going to Maracaibo is as important as Obama going to Cuba.” We see the duo being served breakfast in what appears to be a palace in Maracaibo. Maracaibo is a city in northwestern Venezuela and the capital of Zulia state, known as the center of Venezuela’s oil industry.

Vilsamil says, “Congo is running out of time. The town is already lost.  It’s just mud and snakes left.”

The final scenes of the film show a deserted, watery, abandoned ruin of a town.

The film premiered at Sundance, which helped finance it. I hope to have its Director/Writer on my Weekly Wilson podcast of November 19th, “live.”