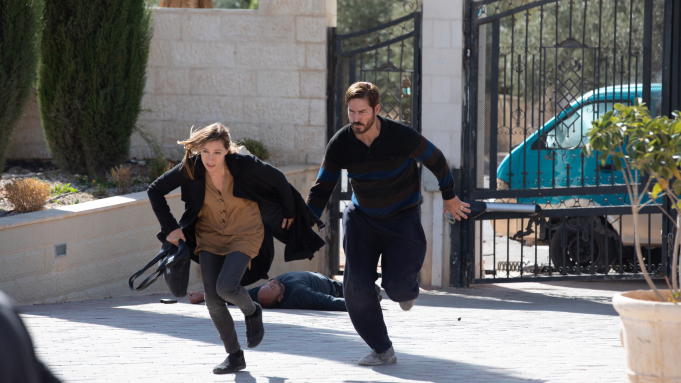 The film “Infidel,” backed by conservative producer (and convicted felon) Dinesh D’Souza, opened September 18th with lead Jim Cavaziel portraying Doug Rawlins, the husband of a U.S. state department employee (she deals with trade matters) who is kidnapped in Egypt while on a speaking tour. Doug makes the bad mistake of trying to sell Christianity to the predominantly Muslim crowd.

A contemporary Middle East thriller starring Jim Caviezel as an American kidnapped while attending a conference in Cairo, who ends up in prison in Iran on spying charges. His wife goes to Iran, determined to get him out.

It falls to Doug’s wife, Liz, to travel to the Middle East to try to rescue Doug, much like Angelina Jolie, playing the part of Daniel Pearl’s wife Mariane, tried to rescue her husband Daniel, the kidnapped journalist who was captured in Pakistan and ultimately beheaded.

I attended a lecture by Mariane Pearl, following the events that were portrayed cinematically in that 2007 film. This movie reminded me very much of the 2007 bio-pic, except that Mariane seemed to have a better plan when she set off for what turns out to be Lebanon (and, ultimately, Iran). Liz had interpreters lined up, state department assistance at all points, and didn’t simply wander out of her hotel room and nearly become a captive herself, because, as she put it, “I couldn’t stay in my room.”

No, you can’t simply “stay in your room,” but have you lined up any guides or interpreters? Do you have a plan? I think we have all seen how things can go horribly wrong when there is no unified plan for running things. We have 200,000 dead American citizens because we have no unified national plan. Surely this savvy State Department employee could demonstrate a better plan than is shown in the film? That is one of the criticisms and my skepticism about D’Souza’s goals with his films is also baked into the cake. (An expression I had never heard used until the last two days on CNN.)

Jim Cavaziel is a good actor. He has been turning in fine performances in generally good films for a long time. Like the character he portrays in this film, his outspoken uber-Catholicism shot his career in the foot.

After portraying Jesus in 2004’s “The Passion of the Christ” there was at least one instance when Cavaziel refused to play a love scene with his onscreen wife because it violated his Catholic morals. He must have been fairly vocal about it, because it seemed to slow his career down to a snail’s pace. (I would point out that there are other actors who achieve the “no sex scene” rule without being viewed as difficult. How about Denzel Washington—who rarely has onscreen nudity in any of his films.)

Cavaziel is probably best known for the television series “Person of Interest” (2011-2016), where he played John Reese for 103 episodes. As mentioned, he also portrayed Jesus in “The Passion of the Christ,” and IMDB says that a second film entitled “The Passion of the Christ: Resurrection” is afoot. [Mel Gibson being the other extremely Catholic Hollywood figure, that sounds plausible.]

Cavaziel was great in 2000’s “Frequency” as the son who makes contact with his long-deceased firefighter father via the radio and, going further back, had a breakthrough role in “The Thin Red Line” in 1998. I saw Cavaziel portraying Jimmy Bierce (the bad guy) in “The Ballad of Lefty Brown” (2017) at SXSW. While that film had beautiful cinematography, the Bill Pullman-starring vehicle was underwhelming in most other respects. (The $8 million-dollar film made less than $8,000 worldwide, while “Infidel” cleared $1,384,296 opening weekend and has grossed roughly what it cost to make, with a $2,674,599 worldwide take as of yesterday).

Others deserving praise for their acting in “Infidel” are Claudia Karvan as Liz Rawlins (Cavaziel’s wife onscreen), Hal Ozson who played Ramzi, and Aly Kassem who plays Javid, the man who betrays David Rawlins and commits an Honor Killing. 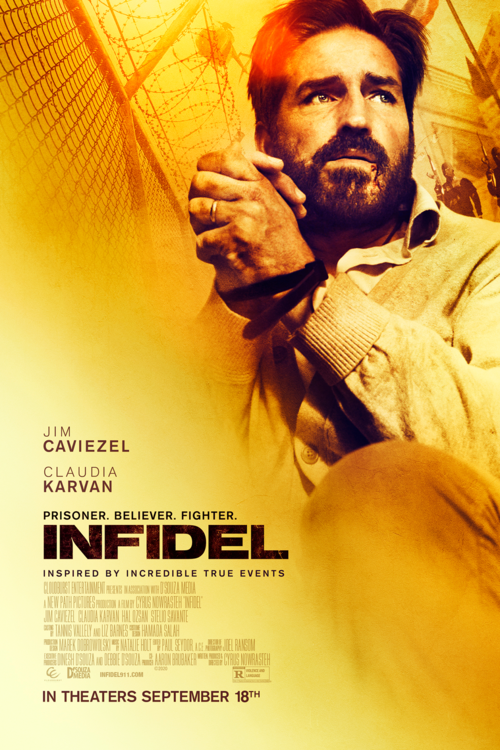 The director of “Infidel,” Cyrus Nowrasteh, both wrote, directed and produced this film, which was shot in Jordan. It opened on 2,400 screens in 1,724 locations, a welcome relief from the drought of original films NOT being released in the near-empty cinemas open in the United States. “Infidel” was originally intended to open on 9/11. The xenophobia inherent in the plot is masked by a thrilling rescue film that portrays Cavaziel as a true believer who isn’t a super-hero and is very lucky to have such an enterprising, well-connected wife. There’s an exciting rescue attempt, although the phrase that you’ll remember is “The days of Entebbe are long over.” Still, when his wife shows up to rescue him, she announces, “I didn’t come here to watch you die.”

Nowrasteh is the child of Iranian immigrants who was born in Boulder, Colorado and attended school in Wisconsin, transferring to the University of Southern California to study film. With a cast of 17 and 38 total people working on the film, including an outstanding turn by Hal Ozson, portraying Ramzi, Cavaziel’s British interrogator, Nowrasteh has pulled off an entertaining and well-paced film that didn’t make me want to rise to my feet and yell at the woman across the aisle from me, [who was applauding after “Obama’s America,” another D’Souza-produced,  a shameless attack on President Barack Obama.] There have been other D’Souza projects that have been just as one-sided and inflammatory, but Nowrasteh, while certainly critical of the Iranian prison and court system in this one, keeps the focus on the rescue attempts, an improvement.

Nowrasteh has made one previous film with Cavaziel. Since he is paired with Conservative icon Dinesh D’Souza, he seems to have managed to be criticized by liberals and conservatives alike. When Nowrasteh made “The Day Reagan Was Shot”, which starred Richard Dreyfuss as Alexander Haig, liberals criticized him for it.  Nowrasteh responded by saying: “’The Day Reagan Was Shot’ provides the first-ever dramatization of a constitutional crisis and government cover-up and the threat they pose to a nation when a president becomes incapacitated.  This is important and relevant and raises issues that should be discussed openly.”

Nowrasteh was also attacked for an alleged “conservative bias” in his controversial ABC docudrama The Path to 9/11, which he wrote and co-produced. Nowrasteh describes himself as more libertarian than conservative or liberal, but make up your own mind.

Nowrasteh’s film “The Stoning of Soraya M.” (2009) was condemned and banned by the Iranian government. Thousands of copies were bootlegged into the country. It became an underground hit in Iran, forcing the government to put a temporary moratorium on stoning as a punishment, most notably in the Sakineh Ashtiani case. On this morning’s Fahreed Zakaria program (9/27) the Iranian Ambassador to the U.N. was asked about the recent execution by hanging of  27-year-old wrestler Navid Afkari, 27, who was sentenced to death over the murder of a security guard during a wave of anti-government protests in 2018. Afkari said he had been tortured into making a confession and was innocent, but was still executed by hanging, so the “kangaroo court” criticism of the Iranian justice system seems deserved.

The music by Natalie Holt is very good. Likewise, the cinematography by Joel Ransom was top-notch.

It is important to watch this film—produced on a modest budget—and keep your own counsel on whether it is hammering home points-of-view that are straight out of the Conservative playbook. Rescuers in the film turn out to be Hezbolleh (where women have a more equal status) but xenophobia may reign in this one.

All that being said, that doesn’t keep the escape portions of the film from being exciting and well-done, nor the acting from transcending the ordinary.