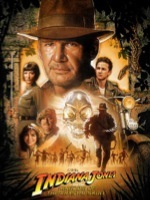 Mark November 11th as the day to go pick up your copy of Indiana Jones and the Kingdom of the Crytal Skull. Some people might not have liked it, but it will be good enough to cap out my collected works of Dr Jones.

It seems we finally have a confirmed date on when to expect that adventurous paleontologist on DVD. Indiana Jones and the Kingdom of the Crystal Skull has been set for a DVD release on November 11.

Sadly, we have no cover art, pricing or special features details at this time, but we’ll be sure to update this story as soon as more information comes in. Also, there has been no official word on a Blu-Ray release for this title.

Paleontologist? Indiana is an Archeologist! Paleontology studies dinosaurs. Anyways, the movie will be yours for the having in November.

I am a little surprised that they would put this out and NOT release a BluRay on the same day. Maybe with the lack of cover art or special features news they just don’t want to assume it will.

But Lucas has his fingers in this project and we know how much he loves to put out multiple versions of the same release. So much so that around here to “Lucas your DVD” has become a verb. Special edition BluRay and 2disc set out by Christmas? BluRay only available in the 8 disc Adventure Pak collectors edition with special cameo appearances by JarJar and ET? I wouldn’t put it past them.