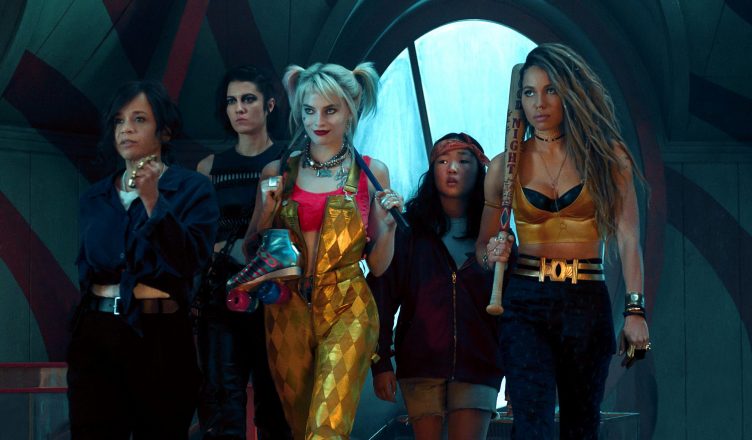 “Birds of Prey (And the Fantabulous Emancipation of One Harley Quinn)” is a twisted tale told by Harley herself, as only Harley can tell it. When Gotham’s most nefariously narcissistic villain, Roman Sionis, and his zealous right-hand, Zsasz, put a target on a young girl named Cass, the city is turned upside down looking for her. Harley, Huntress, Black Canary and Renee Montoya’s paths collide, and the unlikely foursome have no choice but to team up to take Roman down.

Right off the bat, Birds of Prey wastes little time to let you know the level of humor you’re going to encounter. It was a really nice and creative touch to infuse a bit of animation to really help emphasize some of the comedy. The animation wasn’t overdone to the point where you’d think you were watching Space Jam, but it was the right amount to help match the character of Harley Quinn (played by Margot Robbie). I think one of the funniest scenes had to be Harley Quinn’s “shanking scene” and her “Police station” scene was probably one of the most exciting to watch. When it came to performances, the overall cast was pretty good. Mary Elizabeth Winstead (played “Huntress”) was enjoyable although I thought her role might have benefited by being less humorous. I thought Jurnee Smollett-Bell (as “Black Canary”) executed her role effectively thanks to having a bit more to work with in regards to her character.  I can understand how some people may be more drawn to one or two moments to highlight the supporting cast members but I didn’t get the sense that any of them stole the show to speak. Margot Robbie, however, definitely led the way as the true standout in Birds of Prey. Robbie  delivered an excellent performance as “Harley Quinn”. Whatever you may have enjoyed about her in Suicide Squad was turned up a notch in this film. She was easily the brightest spot in this film. Unexpectedly, Robbie was able to show a different and more full side of her character by capturing a nice range of emotions and therefore making “Harley Quinn” a bit more relatable. I really liked how Robbie was able to switch up the different sides of her personality by being wild and funny one minute, to being vulnerable the next, to quickly tapping into her academic background to deliver a quick psych evaluation on the spot. Without question, I think one of the best highlights to Birds of Prey was the action. I thought that the fight scenes were done mostly well and almost gave off a bit of a John Wick type of vibe at times. While the fight choreography may not have been as tight as one would find in a John Wick fight, it did incorporate some humor and gruesome violence. Some of the bone crunching scenes were probably the most engaging as they’ll definitely get you to cringe a bit. Whenever Harley Quinn has a weapon, just know you’re in store for a nice treat. I should also mention that the cinematography in this film really helped to enhance the fight scenes. The slow motion effects were done in a meaningful way to help you see the full impact of certain moves.

There aren’t really any major things wrong with this film, but there are a couple of minor issues to mention. One of those nitpicks would be that little musical number that was included in the film. I didn’t think it added any real value and it felt like a bonus scene that would’ve been better suited for the deleted scenes section of the Blu-Ray.  Thankfully, the scene was short and brief. The structure and the flow of the story is a bit out of sorts when it comes to its direction. It begins with a focus on Harley, but then jumps around to other characters, and comes together in what feels like a clumsy way. However, in all fairness, this story is being narrated by a mentally unstable Harley Quinn so there’s some wiggle room to be given. When it came to the characters, I think one of the weaker ones was that of Ewan McGregor’s Black Mask character. I understand that this can be chalked up to a different portrayal of the comic book character, however I just wasn’t a fan of how he was portrayed. The character isn’t that deep, and he’s really just a typical gang leader with anger issues. However, in this film, it almost seemed like they played him off as being bipolar when he would go through a range of emotions that just were off putting. While again this is minor, it just felt like Birds of Prey was forcing his character to be more of a match for Harley Quinn rather than allowing him to be the basic crime boss that he’s typically been from the source material. Plus it would’ve been nice had he actually worn the Black Mask more because we only got a few minutes of that in the whole movie. Now, despite all of that, he was still entertaining. The final nitpick for Birds of Prey is how the characters in this movie didn’t seem to remain true to themselves. It seemed as though each character had a distinct set of personality traits that made them unique, however, the moment they were around Harley Quinn, they would immediately begin to adopt her traits. For example, there’s a character in the film who’s pretty serious and sincere and in the final climatic third act of the film, she all of a sudden is cracking jokes and smiling more. That immediate shift felt odd and unearned. Worst off, I felt as though it robbed the important contrast in the dynamic between Harley Quinn and other characters. In other words, if everyone around Harley Quinn starts acting like her, then it makes Harley Quinn less special in a sense and diminishes her prominence as the lead.

Birds of Prey is a wildly fun and violent entry into the DC comic book movie lineup. It’s basically a softer version of Deadpool with its narration, humor, and violence. Only real difference is that it’s less bloody. Nevertheless, Birds of Prey portrayed both a tone and direction that perfectly matched the personality of Harley Quinn. While the film may not be a perfect home run, it’s still an entertaining watch with a rock solid female-led cast. I think a major accomplishment for this movie was the fact that it was able to stand on its own without the need of a more prominent figure like Batman, although the Joker is referenced a lot (and not seen) in the movie. If you happen to enjoy the animated Harley Quinn series on the DC Universe streaming platform, then this movie will be right up your alley. And even though this may not be saying much, this was better than Suicide Squad too.  For those wondering, there is something after the credits which is just an audio clip. Again, similar to Deadpool, it’s not something you need to feel compelled to stay for. The audio clip is just a funny message from Harley that isn’t teasing any future movies or anything like that. You can save yourself the 5 min wait. Agent “Bell Bottom”: To The Rescue!

Malignant Review: I Believed In James Wan And He Let Me Down

Cinderella (2021): Yet Another Disappointing Remake of the Fairytale