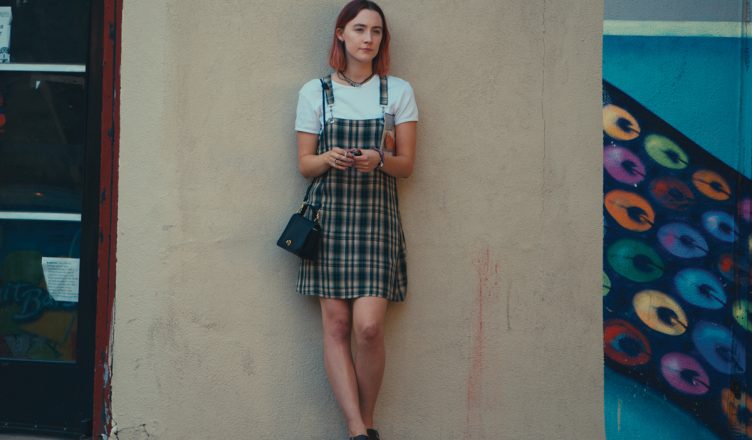 Lady Bird is the name that Saiorse Ronan gives herself (in the film of the same name), rather than her given name of Christine. The Greta Gerwig-helmed indie film was smartly written and gives Gerwig an impressive directorial debut with an equally impressive cast, including Laurie Metcalf as LadyBird’s mother, Tracy Letts as Lucas Hedges, Beanie Feldstein as Julie, Lady Bird’s best friend, Lois Smith as a nun with a sense of humor,  Lucas Hedges as Christine’s first boyfriend (who turns out to be gay) and Timothy Chalemet as Kyle, the boyfriend who deflowers Lady Bird in what she hoped would be a special experience for both of them.

I first became aware of Greta Gerwig in the Rebecca Miller-directed “Maggie’s Plan,” where she co-starred with Ethan Hawke and Julianne Moore (2015). However, her first “big, breakthrough” role was in “Frances Ha” in 2012, which she co-wrote with Noah Baumbach, with whom she has had a personal relationship since 2011. She showed up again as Abigail “Abbie” Porter in 2016’s “Twentieth Century Women” with Annette Bening. Now she is both acting, directing and writing. She has said, “Creating projects is really what’s happening these days. The chance to participate in your own career is a lot more exciting than just hoping that it all works out.” Judging from Lady Bird, Gerwig has a great sense of humor and a lot of natural wit. The Lady Bird script showed that. Set in 2002 Sacramento there are autobiographical touches from Gerwig’s own growing up in Sacramento that ring true.

For example, when Christine (aka, Lady Bird) mentions that Alanis Morrissette wrote the song “One Hand In My Pocket” in 10 minutes, her sarcastic mother (Laurie Metcalf,  RoseAnne’s sister on that TV sit-com) says,  wryly, “I believe it.” There is Lady Bird’s first boyfriend Danny (played by Lucas Hedges, who also turns up playing Frances McDormand’s son in “Three Billboards Outside Ebbing, Missouri”), who is from such a large Irish Catholic family that he says, “It’s hard to find a girl to date who’s not my cousin.”

Sacramento—where Gerwig really grew up—is knocked as “the Midwest of California” but, later in the film, we get the impression that she really enjoyed growing up there.

One scene involving an anti-abortion speech by a well-meaning volunteer has the opinionated Lady Bird unimpressed by the woman’s earnest speech explaining how she was a child whose mother nearly aborted her, but did not. Lady Bird says, “If your mother had had the abortion, we wouldn’t have to sit through this effing assembly.” Of sex, in general, (after her first sexual experience), Christine says, “I found when it happened that I really like dry humping more.” She is also crushed to learn that her partner, with whom she thought she had a “special” relationship, has been with six other girls. He nonchalantly reassures her, “You’re gonna’ have so much unspecial sex in your life.”

Laurie Metcalf and her husband, played by playwright (“August: Osage County”) and Chicago actor Tracy Letts, are always struggling financially, so Lady Bird’s hopes of going to an East coast school are not supported by Mom. However, Dad helps his daughter secretly fill out applications for a variety of schools on the East coast and Christine does, indeed, gain entrance to one.

Laurie Metcalf’s Mrs. Hedges has been so hard on her daughter—and they are both such strong personalities—that Mom cannot even bring herself to walk her daughter to the gate to fly East to college. But Lady Bird/Christine recognizes that her mother does truly love her and, in a touching scene near the end of the film, calls home to tell her mother that she loves her.

There are no IMDB fact sheets or trailers for this film yet. Suffice it to say that all the actors mentioned above do a great job and the script is top notch. It will move on to the Austin Film Festival next, which runs from October 27-November 3rd.

Tracy Letts, who plays Christine’s father in the film, joined us for a Q&A at the end of the movie and shared that the crew shot “mostly in L.A.” He said, “Sacramento means nothing to me. It had zero meaning for me.” As the rock of the family, Lucas Hedges, Letts said that the cast didn’t meet each other until the film premiered at Sun Dance.  He added, “This is the movie I thought we were making when we read the script and that is not always the case.”

Letts had high praise for Gerwig’s work as writer/director, saying, “She was so sure-handed. She knew exactly what she wanted.” He went on to say that he had known Laurie Metcalf, who plays his wife, for 30years, from the Steppenwolf Theater, but they had never worked together. He said, “Her script was fantastic.”

When asked about rehearsal time, he said, “When making a movie at this budget level, there’s no rehearsal.  You make yourself available to the chemistry,” and, he noted, despite not being a father himself, “We just clicked from day one,” meaning Saiorse Ronan of “The Lovely Bones” and Letts as her father. He repeated, “If there’s a better algorithm than the script, I don’t know it. It was all on the page. The script was great.”

Letts had a bit of criticism for Lucas Hedges (his character), saying, “I didn’t identify with that abdication of the father.  When the trouble starts, he steps out of the room.  The idea that he suffers from depression? Depressed? Who isn’t?” While Letts didn’t identify with the opinionated controlling mother and the father who likes to play the softie and do very little disciplining, I could relate to it on a personal level and I know many other folks who have lived that scenario in their own lives, too. The good news is that the daughter realized her mother’s genuine caring and concern for her welfare and it did not lead to permanent alienation.

As Letts says, “She’s (Greta Gerwig) really a very attractive person because she’s so smart and magnetic.  She’s gonna’ make many other good films.” I agree and enjoyed this first one.

One thought on “Lady Bird Is Greta Gerwig’s Directorial Debut”