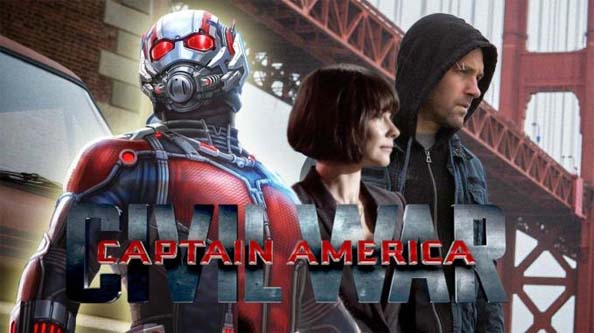 Captain America: Civil War is racking up quite the roster. With a slew of characters confirmed for the third film in the Captain America series including those from Captain America: The Winter Soldier and newcomers Scarlet Witch and Black Panther, today we got the announcement of a character with a much “smaller” role.

According to CinemaBlend.com, Ant-Man (played by Paul Rudd) will be in the film. Not only will Ant-Man be in Captain America: Civil War, he will also be a part of Captain America’s team. How Ant-Man becomes a part of Cap’s team is still a mystery at this point but maybe the upcoming release of Ant-Man in July 2015 will shed some light on the details.

While some may get excited about Ant-Man joining the film, this could cause trouble in regards to cinematic quality. Avengers: Age of Ultron was recently criticized for having “too many superheroes” and from the cast list, it sounds like Captain America: Civil War may have even more. The list of characters that we’ve known about for some time was already extensive. Captain America, Iron Man, Black Panther, Black Widow, The Winter Soldier (Bucky), Falcon, Hawkeye, Crossbones, and Baron Zemo were all characters confirmed for quite some time. Now we have newcomers confirmed for the team including the more recent Ant-Man announcement followed by The Vision, War Machine, Scarlet Witch, and oh yeah…freaking Spider-Man. That’s a total of 14 superheroes and super villains! That’s not even including recurring characters that don’t have any particular powers.

So while Ant-Man might not have a “big” role (see what I did there), we’ve known the problems that come with an extensive cast. The larger the cast, the more the character development gets stretched thin. While I still enjoyed Avengers: Age of Ultron and thought it was a lot of fun, I felt that it was pushing the threshold for superhero saturation. Ant-Man may be a “small” addition to the team but will these frequent additions cause the superhero bubble to burst?

Tell us what you think!

4 thoughts on “Ant-Man will be in Captain America: Civil War!”