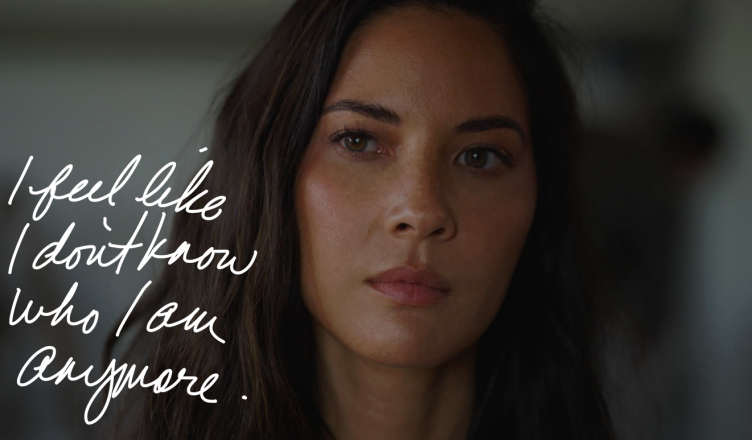 Justine Bateman—sister of Jason Bateman—who once played Mallory Keaton during a 7-year stint on “Family Ties,” ending in 1989— directed her first feature film at SXSW entitled “Violet.” It was supposed to premiere here in 2020, but we all know what happened to SXSW in 2020. It’s a good first film effort, and blew some other actors-turned-directors out of the water.

The film seems  autobiographical, with an inner voice constantly telling the lead character, Violet, that she is inadequate. The “inner voice” pointing out all of Violet’s insecurities is portrayed by Justin Theroux. Other veteran actors like Bonnie Bedelia (“Heart Like A Wheel,” “Die Hard”), Laura SanGiacomo (“Sex, Lies and Videotape”), and Jim O’Heir (Jerry Gergich on “Parks & Recreation”) are tapped for small parts in the film, but Olivia Munn (“Newsroom”) and Australian actor Luke Brace (“Little Fires Everywhere”) are the leads.

Justine Bateman wrote a book entitled “Fame: The Hijacking of Reality,” released in 2018. In it, she talked about how  fame after playing Mallory Keaton on “Family Ties” led to her own neuroses. One revealing statement, both from the book and from an interview with “Vanity Fair,” said, “I think you have to have a really good sense of yourself to be able to talk about life post-fame.” She describes “the leper effect” of not being as famous as you once were and how debilitating losing fame can be. “Most of the time, you’re so overwhelmed with the fame that it’s hard to have your wits about you as it’s happening. And then it’s over quickly.”

Bateman related how, after fame seemed to have passed her by, she googled herself and found fans online saying she “looked old.” (She was only in her forties at the time, but is now 55, married 20 years with 2 kids). Her reaction? “I was just kicking myself to the curb and deciding they were right and I was wrong.  I then absorbed their view of me for a while, and it f***ed me right up. Took a while to get rid of that.”

This film seems to confirm that, despite a great number of accomplishments (she graduated from the University of California, Los Angeles, with a B.S. degree in computer science and digital media management and holds a pilot’s license) there may be a lot of Bateman’s own insecurities in this story about 31-year-old studio executive Violet, who is trying to shepherd a pet film project through the studio despite a Neandrethal boss (Tom Gaines, as portrayed by Dennis Boutsikaras). Violet is extremely insecure, but her story arc is going to see her overcome her crippling fear of doing things “wrong.”

The film has a jarring opening credit sequence, which I did not enjoy.  The use of Justin Theroux’s voice-over—the voice in her head—at all times and the cursive scrawl onscreen were experimental touches that did work, for me.  But this was about the third film in the SXSW day that revealed deep-seated issues with mother/daughter  (or other family)relationships or the expectations placed upon the lead characters by others with which they are trying desperately to cope.

In one memorable sequence, Violet is called and told that her mother has died unexpectedly of a heart attack. The writing onscreen (Violet’s interior dialogue) says, “I tried to make her love me. I tried so hard. So many times.” Violet makes a decision not to attend her mother’s funeral, but to stay and attend her boyfriend Red’s party, instead. While it may be okay to learn to say no more, attending the funeral of a parent is probably not the place to start. There is an awkward phone conversation with Violet’s older brother after he protests about her no-showing at the funeral, which ends with her saying “Never call me again.” Makes you wonder.

In a “Vanity Fair” interview, Justine Bateman shared this thought: “I think, generally, nowadays, people seek out fame and respect it, because they’re assuming a sort of state of being that will solve a lot of the things that they dislike in their lives.” I had just watched a horrifying documentary about women who left their countries to join ISIS and are now stuck in refugee camps in northern Syria. They were being used as human shields by ISIS, starving, living without water or enough food, and completely miserable [and the documentary followed them for years].  Somehow the “inner voice” telling a privileged studio executive that she isn’t good enough doesn’t seem like such a Big Problem after that jolt of reality. I was reminded of Oprah’s advice to write messages of daily gratitude. Maybe a good place to start?

Olivia Munn (“The Newsroom,” “X-Men Apocalypse”) plays the lead role in “Violet.” She does a great job. It is easy to see her as a surrogate for Justine Bateman, post “Family Ties.” The male lead, Red, is played by Australian actor Luke Bracey (“Little Fires Everywhere”). Interesting to note that Bracey (born in 1989) is 9 years younger than Olivia Munn (1980). That was a pleasant reversal of the norm of male leads playing opposite much younger women. Kudos.

I liked the film, but found the “woe-is-me” POV difficult to sympathize with when Violet is so much better off than 98% of the rest of the world’s population. Perhaps it was slogging through the grueling story of women held captive in northeast Syria or the incredibly difficult health crises portrayed in another SXSW film that affected me in this way.  I was happy when Violet—after a sexist confrontation with her douchebag of a boss—tells him off and recognizes her own worth and immediately goes over to the much better job offered her by the head honcho at Phoenix Films (played by Chicago’s very own Jim O’Heir, who was Jerry on “Parks and Recreation” for many years).

So, in no particular order, I could relate to the theme of insecurity that we all sometimes fight within our heads. I enjoyed the performances and think that Justine Bateman showed a better “feeling” for what makes an interesting film than her counterpart Robin Wright (formerly Robin Wright Penn).

I thought the opening credit sequence was jarring,— and not in a good way.

I liked the music (Vum). The cinematography by Mark Williams (“Lost in Translation,” “Any Given Sunday”) was good. Likewise, the editing by Jay Friedkin (“Ordinary People,” “Babe”) was fine, as was the acting by one and all.

This directorial debut by a female star was much more expert and enjoyable than Robin Wright’s “Land” earlier this festival season, which was a real snooze-fest. I look forward to more from Justine Bateman.


In researching remarks by Justine Bateman from  her book or a “Vanity Fair” interview, I found this one particularly relevant:  “It isn’t enough to just work hard and be a good person or anything like that.  The American dream shifted over the years.  It’s now either to win the lottery, be famous, or make as much money as possible—and make sure everybody notices.”