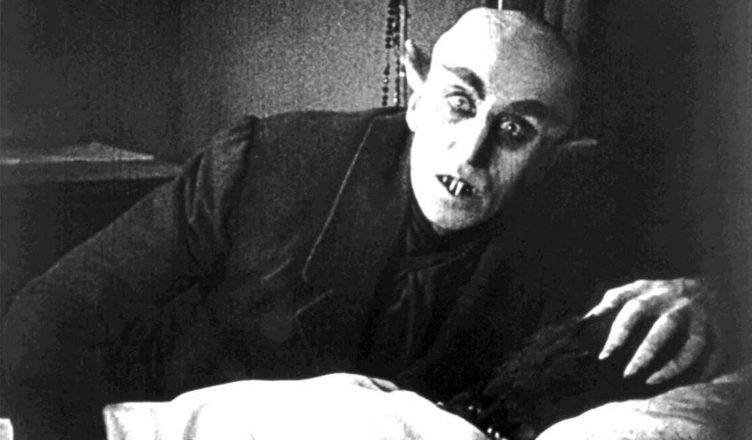 Growing up there were two types of movies I always loved watching…Horror movies and silent movies. Surprisingly, I had never seen the classic 1922 silent horror film Nosferatu in its entirety. Luckily for me and my fellow Horror Flick Chick Angela, we were lucky enough to catch it last month at the Alamo Drafthouse in Brooklyn with a live score! If I had to chose one word to describe this experience…amazing!

The film was excellent… I found Nosferatu to be very creepy with some funny moments sprinkled in. Nosferatu tells the story of Count Orlok (Max Schreck), who summons real estate agent Thomas Hutter (Gustav von Wangenheim) to his isolated Transylvanian castle in the mountains. Once there, Count Orlok tells Hutter of his interest in buying a house near Hutter and his wife, Ellen (Greta Schroeder). Once it’s revealed that Count Orlok is a vampire and has his eyes (and fangs!) set on Ellen, Hutter struggles to escape the eerie castle and save his bride.

The highlight of this experience was definitely the live score! For anyone that has ever watched a silent movie, you know that the sound can make or break your enjoyment of it. Although it was not our first Live Score, it was our first time hearing Austin’s own Invincible Czars! Upon getting to the theater, the band had set up a table with some awesome merchandise including t-shirts, cds, posters and the like. We definitely recommend getting out to hear them play whenever they are in your town. They were so entertaining and their playing is so well crafted. The music was so vibrant that we found ourselves really getting into the creepy scenes and laughing loudly during the funnier scenes. It was a blast!

The Invincible Czars’ Nosferatu score included so many musical instruments. When we looked at the band, we kept wondering how only 4 players were going to play the violin, glockenspiel, organ, flute, bass clarinet, vocals, music box, loops, electric guitar, bass, singing bowl, tambourine and other hand percussion! It was a sight and sound to behold for sure!!

The Invincible Czars naturally incorporated classical music into their score. We heard some of Bela Bartok’s Roumanian Folk Dances. A hilarious and yet perfect choice, given that it is a nod to the fictional Count Orlok’s home turf. The highlight of their arrangements was the vocal performance by the band’s only female member Leila Henley, an honorary Horror Flick Chick for sure!

We can’t wait to hear/see Invincible Czars again! Thanks for the grand time!