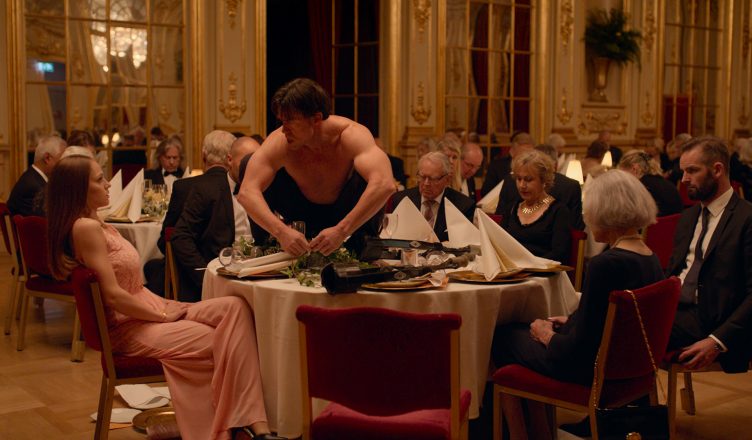 The Square won the Palme d’Or at the Cannes Film Festival this year. Last year, Swedish director Ruben Ostlund’s film about an avalanche and family dynamics, “Force Majeure,” was one of the most interesting at the Chicago International Film Festival. Still, a Cannes darling is not always mine.

I am happy to report that The Square lived up to the hype and then some. Mind you: I am not always as positive about Cannes’ picks. “Holy Rollers” a few years back was not a favorite, so what was The Square like?

In a word, it was funny, thought-provoking, interesting, and timely. It also had the benefit of American actors familiar to U.S. audiences, utilizing Elisabeth Moss (“Mad Men,” Hulu’s “The Nun’s Story”) and Dominic West (television’s “The Affair”). 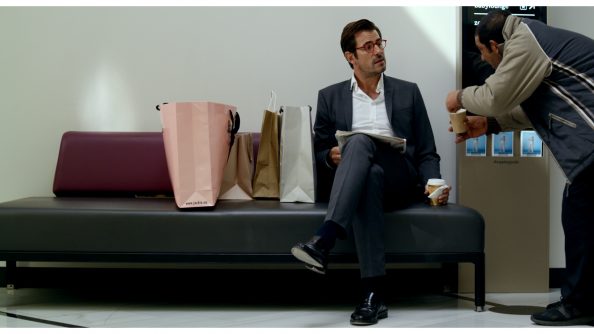 The plot revolves around a museum director (Claes Bang, who resembles a younger Pierce Brosnan), Christian Juel Nielsen. He manages the X-Royal Museum in Sweden, and the sets and cinematography are superb. The Museum is mounting an exhibition called The Square which is supposed to emphasize mankind’s universal need to care for each other. (“How much inhumanity does it take before you exercise your humanity?”)

The Museum’s mission statement for The Square says:  The Square (a 4 x 4 meter space, marked off) is a sanctuary of trust and belonging. Within its boundaries we all share equal rights and equal responsibilities.” 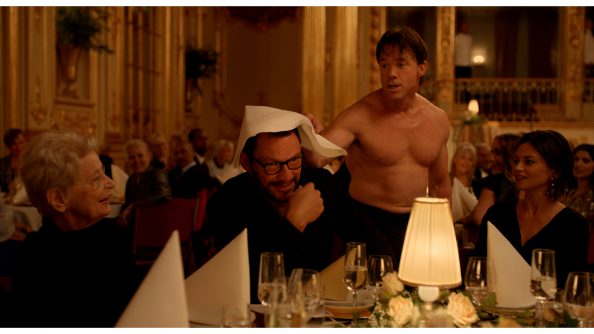 Again, I found myself laughing out loud at the ridiculous situations that beset the handsome Christian. I did not expect a laugh-out-loud funny movie, but that’s what The Square offers viewers. Having said that, it is also extremely thought-provoking and makes wry statements about the pomposity of art in museums, about how we relate in a social context, and about being kind and caring to others. Qualities like trust, caring and moral courage are examined, but the clever way the issues are examined led to laughter, and there are throw-away lines that are hilarious, as well.

Example:  a museum employee manning what looked like a street sweeper has accidentally vacuumed up a pile of dirt and rocks that was part of Big Shot Artist Dominic West’s display (roughly 30 piles of dirt and rocks in a room, all the same size/height). When an employee comes to tell Christian of this catastrophe, Christian

immediately makes plans to keep this faux pas hush hush and try to repair the pile of dirt without mentioning it to anyone. The museum employee glances over at Elisabeth Moss, standing off to the side waiting for Christian and seems reluctant to reveal the full extent of the catastrophe with her character (Anne) listening. They’re talking in Swedish. Christian reassures her, “She doesn’t understand a thing. She’s American.” [That can be taken two ways.]

There is also a sub-plot involving Christian’s stolen cell phone, wallet and cuff links. And there is the fancy dinner at the Royal Palace, where an elderly couple is being honored for gifting the museum with 50 million Kroner. The “entertainment” is the entrance of an ape-man, Terry Notary as Oleg Rogojin. The patrons sitting in the fancy ballroom awaiting the entrance are told that some people try to “hide in the herd” and not make eye contact. The ape man creates havoc, dragging a pretty woman by her hair across the floor, climbing on tables and driving the Alpha Male Dominic West from the room.

After the showing, Terry Notary (the ape man in the trailer), who was present in Chicago shared this with us:  “We didn’t really know what we were going to do the day of shooting.  We were waiting for an audience reaction.  I was told, ‘You need to chase the alpha male out of the room.’ (Dominic West) I decided I was going to start screaming on the way in there. If it had been planned, it would not have felt real. I was told, ‘Go to the one who doesn’t want to be picked.’

Terry went on to say that he has done a lot of motion capture work. “You go in and play and make all these mistakes and you find the character in the mistakes.  It’s hard, because you want to know what you’re going to do, but it’s not about acting. It’s about life.  Fear is your best friend or your worst enemy.”

The sub-plot involving Elisabeth Moss, as well as that involving a young boy who is stalking Christian and demanding an apology for having been accused of the theft of Christian’s wallet and phone (his cuff links turned up in Christian’s shirt, after all) seemed unfinished.  Elisabeth’s accusations that Christian used the prestige of his position to bed women, while perhaps true, didn’t seem that related to the main idea of The Square.

Not knowing what happened to the young boy who stalks Christian made the film feel unfinished, to me, and Elisabeth’s sexual encounter with Christian was strange, to say the least. (But funny)

I also would have liked a better explanation of the REAL ape that appears in a few short scenes in Elisabeth Moss’s house or hotel room.

While I have seen Cannes’ favorites that I did not like at all (“Holy Rollers” comes to mind), this one I liked very much. Lines like “Consider the social consequences of your actions” and “So, suddenly, it comes down to politics and the distribution of assets” were very timely in today’s world. The film is ambitious and brilliant, with beautiful sets, good acting, and a message delivered with wry humor in both Swedish and English.

I won’t reveal the Marketing Faux Pas that a young P.R. team unleashes upon the populace, for fear of ruining its effect on the film for you, but let’s just say that making a video that “goes viral” is not always a desirable thing, and it certainly isn’t in this case. But it’s pretty funny in a macabre way.