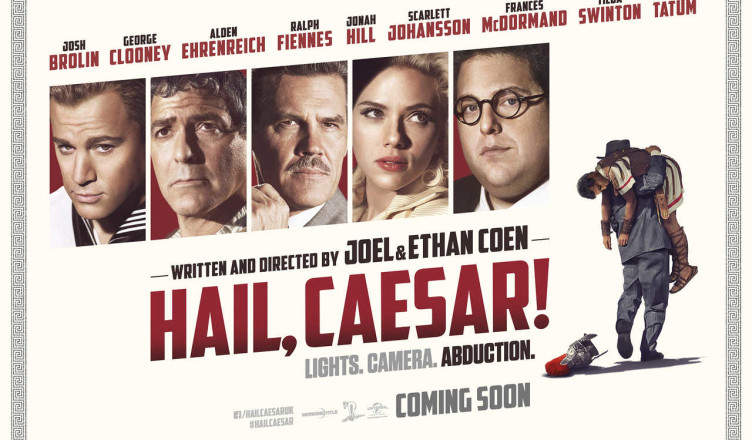 From dramatic darker tones to brighter comedic awkwardness, there’s something to admire about the creative longevity of Joel and Ethan Coen. From Raising Arizona to Fargo to Burn After Reading to Inside Lleyn Davis, they are some of the best filmmakers consistently making quality movies. They acquired many of their fans, several of whom are casual moviegoers, longer before audiences blames consumers to brands entertainment. They are beyond the realms of multiplex venues but simce their fans are everywhere, they can succeed in that environment. And why not!? Hail Caesar has a lot going on for many to see the value in it,but I can tell during one viewing that it will hold beyond multiples ones. This seemed obvious but not everyone will pick up on it. From the script t the performances to the minor details, this is a fun romp about iconic Hollywood.

Hail, Caesar! has a spectactular  ensemble with great performances. Josh Brolin was terrific as the CEO of Capital Pictures one of the big studios in Hollywood. He has to manage the chaos of the studio while commanding the role as the man in charge doing his best to take gabe lead. He was under appreciated in the criminally underrated Inherent Vice. Likewise, George Clooney is masterful as the thinks he knows what’s going on trying to understand his circumstance and the people around him. Trapped in the house we see funny and witty moments among the Communists. However it is Alden Ehrenreich in a breakout role as Hobie Doyle who is phenomenal. He is playful and intriguing with a striking big screen presence. He is one to watch out for in the coming years Another fun role is Tilda Swinton as twins Thora and Thessaly Thacker who report the misdeeds of Hollywood.

Dropping the grim tones, but adhering to their quirky, awkward humor and odd ball situational moments. Hail, Caesar! mostly plays it safe but isn’t a shallow breeze of a brisk movie. Hardly. Many things are thrown at you including costumes, characters, and condensed plot. The already infamous Channing Tatum sailor musical number will have audiences talking. Some will think it is two minutes too long, while others wanted it to be a good chunk of the Hail, Caesar! Consider me in the former group. Regardless, I will be outvoted and admit this could be one of the more memorable movie moments of 2016.

Hail Caesar! may not be for everyone but most people will enjoy it. This might be the Coen Brothers version of The Grand Budapest Hotel. This will win over new fans but also be a technical achievement as the directors that rarely go big indulge in grandiose filmmaking. Exploring the themes of Hail Caesar! to greater detail, it is about believing in something. Everyone has faith in a system, beliefs, or themselves. This realization can be deeply explored through a few more viewings. Until then, just enjoy the zany, screwball ode to the golden age of Hollywood that is Hail Caesar.

One thought on “Review: Hail, Caesar! is another Coen Brothers Quirky, Comedic Romp”