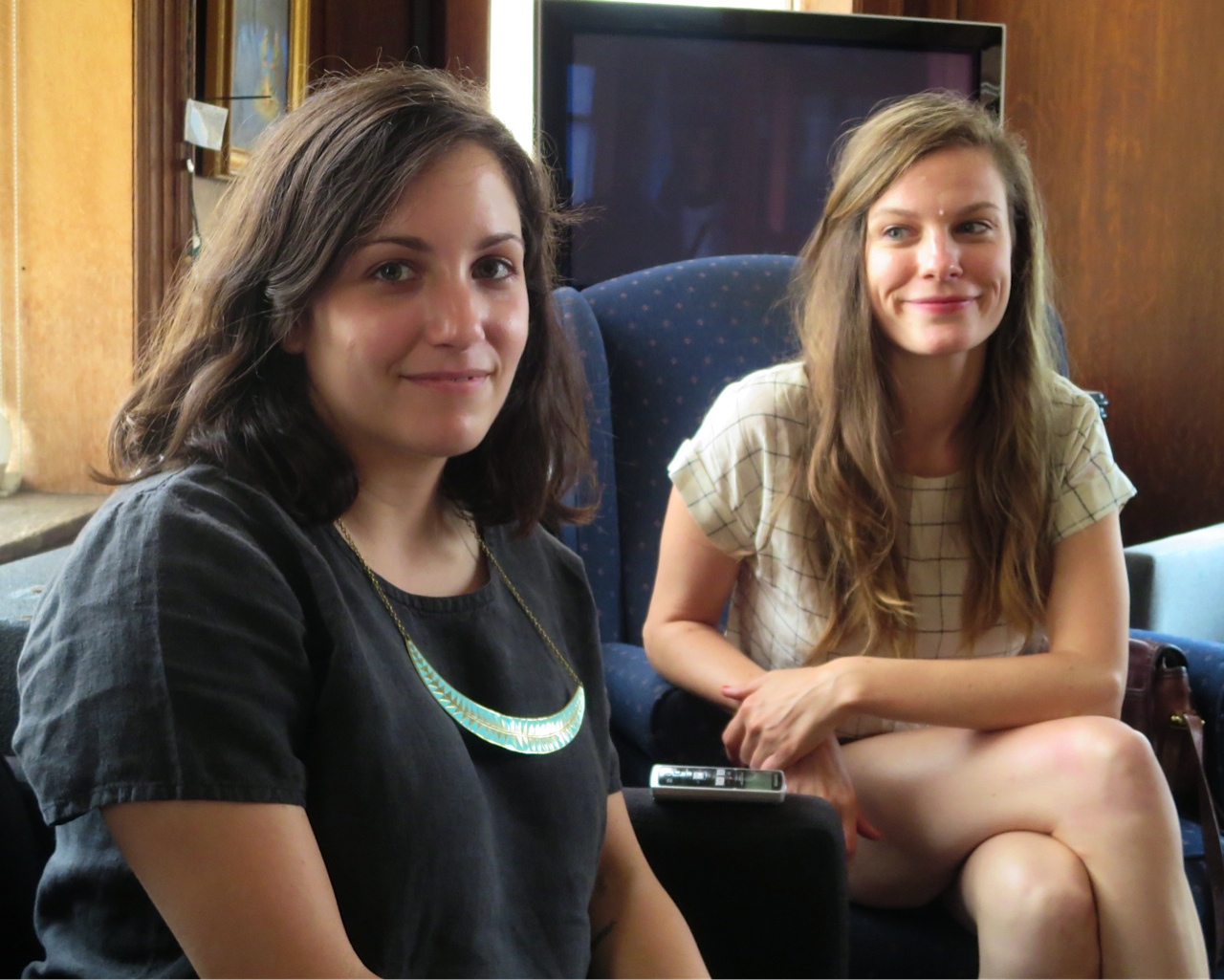 The character study of a young high-school teacher who has a meltdown after she begins a hot-and-heavy sexual relationship with one of her teenage students is the subject of  “A Teacher,” the feature-film debut of 27-year-old director Hannah Fidell. Lindsay Burdge, who appears in nearly every scene of the film, gives a breakout performance as Diana, a woman whose life is so empty she latches onto a teenage boy for her sexual and emotional needs.

Will Brittain, who makes his on-screen debut as Eric Tull, plays the teenager eager to satisfy Diana sexually, but out of his depth when he realizes she’s having a break down he’s not mature enough to understand. In a performance that could easily have been one-note, he is terrific as a kid who was initially probably just out for the sex but then comes to really care for this woman but doesn’t know how to deal with her neediness and desperation. Things can only end badly. In the sunny offices of Oscilloscope, which released “A Teacher” on September 6, I recently met with Hannah Fidell, who wrote and developed the film for her star. Unlike her dark character in the film, Burdge laughs easily and is lots of fun. She smiled and offered me a chocolate donut as she happily munched on a glazed confection. “Maybe I’ll stop eating soon but for now I’m going to eat this donut,” she laughed.

Here are edited highlights from the 20-minute interview:

It seems in movies whenever a woman is lusty or sexually aggressive she gets punished. Were you concerned viewers, particularly women, would criticize you on that?

Hannah Fidell: It was a concern. And a fact that no one’s really called us out on that has been surprising to both of us I think. And we talked about it quite a bit but at the end of the day we felt that, and I don’t want to speak for you (motions to Lindsay), but I felt that women make mistakes just the same as everyone else does so why should I feel like its my obligation to show women in only a positive way. As for any punishment, it’s part of the nature of the story.

Why did you decide to focus on an obsessive sexual teacher-student relationship for your first feature?

Hannah: I knew going in that I wanted to do a film about a woman in crisis and I knew that I had budget concerns … I knew that I could make this type of film for a small amount of money and honestly, it’s just, it’s a sexy topic and that I knew that that was a way to grab people’s attention.

What was your collaborative process like?  Especially with the dialogue, which is spare. How much did you improvise?

Lindsay Burdge: We did do a little bit of improv sometimes to get into a scene or out of a scene and Hannah was very allowing as far as, ‘if you don’t want to say those words the way they’re written just say them a different way,’ but I happen to really love the script so I really enjoyed saying what was there. If anything, filmmaking wise that would happen, sometimes I would l say that I didn’t want to say anything at all.

Hannah: Lindsay has an incredibly expressive face too.

Talk about shooting the sex scenes. How did you prepare?

Lindsay: It is sensitive doing sex scenes. Fortunately or unfortunately, I’ve done a number of them at this point, so I’m a little more comfortable with it, as opposed to the first film I did, where I honestly was very, very uncomfortable.

What film was that?

Lindsay: It was a long time ago. I don’t even remember. (Laughed.) But it was good because Will and I became very comfortable with each other. We got to know each other so we really felt like friends so it didn’t feel as scary; also it was a closed set, in the truest form. Anyone who wasn’t absolutely necessary wasn’t there, and even probably some people who might have been a little bit necessary weren’t there (laughs) just so that we could be really comfortable and not feel awkward. The last scene where Diana begs Eric to stay was obviously the hardest to shoot. Talk about shooting that.

Lindsay:  It was one of the later scenes that we did. So by that time we had done enough kissy scenes that we didn’t have to think about that aspect of it as much and we could just throw ourselves up to the emotional state of the characters and then that was just sort of like a side note almost. (As for) the physical part, we were so entrenched at that point in what was going on with the characters that we didn’t think about it almost until after.

Hannah: I think also for the sex scenes too, those were the only scenes that we really blocked. I don’t know if you remember this but it’s true.

Hannah: More than we did for any other scene.

Lindsay: Right. We didn’t tend to do a ton of blocking. We had a lot of freedom to move around as we wanted and the camera would find us, which is awesome as an actor, but yeah. I don’t know. It is touchy but fortunately we were like a family, so it didn’t feel as scary.

In the production notes it says both of you related to the central character, that you understand obsession first hand. Explain?

Hannah: Well I’ve certainly been in situations where I’ve just become, where there’s just that tunnel vision where I can think only about them. And it happens a lot less now than it did when I was a teenager, but just to think how much energy I invested in my weird internal kind of obsessions with boys, and it seems like a very adolescent thing to do, and the fact that she’s still acting this way when she’s supposed to be an adult I thought was a nice complement.

Lindsay: I’m totally obsessive so that was really the hook for me, cause that’s how my thinking is. I get totally stuck in one thing on any given day (laughing) and interestingly, I’m not a psychologist, but I think I’ve learned to deal with it a little bit as I’ve gotten older, as far as redirecting my thought, just like meditating or putting that same energy into a creative pursuit is really like the saving grace for me because I feel like all that hyperactive thinking your brain doesn’t have anything to chew on. So if I can think about a role for example or a script or an audition or anything than I’m ok, but if I don’t have something like that my mind will tend to latch onto something, whether it’s a relationship or a socially awkward moment I have at a party or anything. It just goes there, so that was my hook into the character really, was thinking about how once she’s crossed this line and she’s done something she knows is wrong and she can’t tell anyone in the world about it and she’s totally alone with it, there’s no release for all of that tension and it just builds and builds and builds and she doesn’t have the skills, the coping skills to deal with it.

How did you feel about her character? Did you like her?

Lindsay: I don’t think that she liked herself very much. In that way I didn’t like her, in the way she didn’t like herself, but I also love her very much. We really tried to understand where this woman was coming from. What would make this happen to her? We weren’t interested in judging her really.  And we can leave that to everyone else. You know what happens next is that the cops got her and the media got her. The papers the next day would be calling her a number of horrible things. I don’t feel I have to be doing that to her too.

You get frustrated watching her though. You want to shake her and knock some sense in her, tell she deserves better.

Talk about Will, your co-star.

Hannah: He came to an audition that I had in Texas and I had him read. First he read with me and he didn’t know I was the director. He thought I was the casting director and then I had him come back and he read with Lindsey and he was just fantastic.

I read initially his character was just out for sex but that it was his idea to add some depth to his character. How did his role evolve?

Hannah: And he fought for that and I’m so happy that he did. Yeah, initially my idea was that he was just out for sex.

Lindsay: Hannah may have been coming from a little bit of an angry place. (She laughed.)

Why did you change your mind about his character?

Hannah: It was actually a comment that Lindsey made. I think you said that this is maybe one of the first times that you had seen (it in a film). Normally it’s the supporting actress that gets kind of the surface level one-dimensional character. It was funny that, not funny but interesting, in this film it was the supporting actor who got that and I don’t want any character to be just surface level and one dimensional …  Lindsey has to go to such depths, but also I think for Will, working with Lindsay, forced him to take it to the next level as well.

What are you working on next?

Hannah: I’m doing a remake of Ida Lupino’s “Hitchiker.” She was incredible, so I’m quite excited about that. We’re still in the casting-writing place.

Lindsay: I just wrapped up a couple of films. One in upstate New York called “Up the River” and another in Virginia called “Some Beasts,” which has some of the same producers as “Upstream Color” on it.  I’m excited about that. And now I’m sort of auditioning. There are some things in the work but I can’t say yet.

Finally, why did you decide to make the movie so short, only 77 minutes, and why is there so little backstory on Diana’s character?

Hannah: It initially was going to be longer but we felt it told exactly what we wanted to tell. There was no need to go into the backstory.