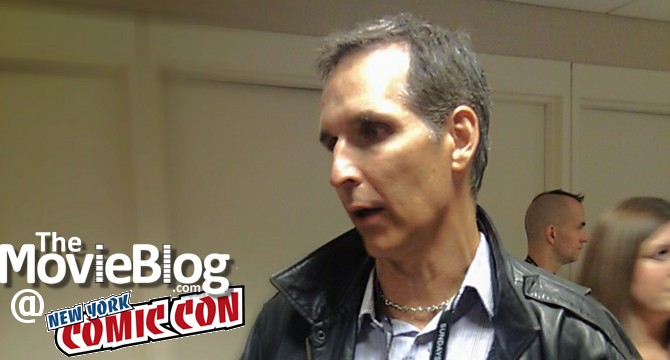 I had a chance to speak with ‘Spawn’ creator Todd McFarlane this past weekend at the New York Comic Con and had a great chat with him about the Spawn movie he’s mentioned off-and-on again over the last few yrs that he’s planning to release. He was very busy and had a very attentive P.R. rep who wasn’t pleased with my insistence to interrupt his migration from one signing booth to another but I was able to ask about the movie, what it would be about, what movies he’d compare it to, and how far along the movie was in production.

Anthony: You mentioned that you’re trying to get another movie about Spawn created, where is that currently as far as development goes?

Todd: All they’re waiting for is my script. As soon as I get my script, which could take me about 2 months if I’m not distracted, that’s always a good guess. I got the story, I’ve been living with the story for 10 years I know the story I got the story down… which is why they wanna make it! Cus, I keep pitching them the story and they go “Well, go write it Todd”.

Anthony: You mentioned in your panel that it would be “scaled back” and it wouldn’t be a “Superhero” story and would be more realistic rather than the “muscle vs. muscle” movie. So, what kind of story do you have in mind?

Todd: You ever see the movie “The Departed”?

Todd: It’s like the movie “The Departed” except there’s a boogey man in it.

Anthony: That’s an unexpected answer for a superhero movie.

Todd: Yeah, I know! It won’t be a “superhero movie”. It’ll be sort of a suspense/thriller/drama. The only thing in the movie that will be out of the ordinary will be the “boogey man” that You and I know as “Spawn”. So, it’s not going to be “Spawn vs. a demon vs. Clown”, they’re not going to do any of that. Think about it as “The Grudge”. There’s only one thing in that movie the “boogey man” in that house, everything else in that is real in that movie so it’s like that. It’s more of a story movie.

It was at this point that his P.R. assistant could no longer hold the tide of nerd strength that approached Todd but as we were seperated I was able to hand him my card and hopefully he finds his way here someday.

I understand his “idea” for a Spawn movie but I’m not wholly convinced in the concept. He mentioned during his “The Devil is in the details” panel that his company is taking a more realistice approach to storytelling in that the stories would be less rooted in supernatural and more grounded in real world issues. He had an interesting analogy during the panel of “What if Rush Limbaugh was really a demon”. What if he didn’t actually believe any of the venom that Limbaugh spews daily and as a demon his ultimate goal by saying these things is to fuel and cause the conflict between men in order to empower himself (cus demon’s feed off hate or whatever). He clearly has an idea for the movie in his head, but I think that everything will rely on the concept of execution which is at least 2 months of non-distracted Todd and with his company releasing 15 issues of Spawn in 1 year with the same creative team I find it hard to foresee an opening in his calendar. Not to mention the Walking Dead, NBA, MLB, and Halo toys.

For those interested I was able to record mp3 audio for a lot of the panel that Todd hosted during the convention titled “The Devil is in the Details”. Todd discussed a lot of plans for Spawn, Haunt, and his toyline for the next year and is a good listen for fans of all things McFarlane.