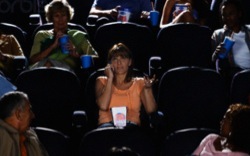 No matter how often I do it or how long I’ve been doing it for, going to the movies is still one of my favorite things to do. I suspect that’s the case with most of us. There’s something about the experience of going out to the theater that watching a dvd at home (which I also love doing) can’t compete with. Maybe it’s the event atmosphere, maybe it’s the big screen or maybe it’s just the popcorn… we all have our own reasons.

4. Commercials running when the movie was supposed to start

6. Parents who don’t take their crying kids out of the theater

7. Teenagers who don’t shut the hell up

8. The guy in the back who thinks everyone wants to hear his oneliner joke

9. Theaters designed so that line ups are outside instead of inside

10. Theaters with outside line ups that don’t spend $500 to set up overhead shelter to protect people in the line from the rain. It’s very simple to do.

11. Theaters that have the “Ticket checker” set up past the concession stand. There are 30 people behind me waiting to get into the theater because I can’t get at my ticket in my pocket since my hands are full carrying 2 cokes and a bag of popcorn that cost me $14. And they don’t even set up a place to set down your stuff to get at your ticket for them!!!

12. I know this falls under “Concession stand prices”… but it deserves to be mentioned on it’s own: $3.50 for a SMALL BOTTLE OF WATER!!!

13. Bad sightline design. Theaters that don’t take into consideration that a tall person MAY actually sit in front of you and you may have a hard time seeing the movie you overpaid for. Increase the slope of the seating… raise the screen a little.

14. Bathrooms with no paper towels and weak air hand dryers. I hate standing there trying to get my hands dry on the 1 operational dryer with 6 impatient guys standing behind me waiting to use the same one.

15. People kicking the back of my seat (this doesn’t happen often… but when it does…)

16. Sitting in an empty row with your buddy… and then 2 sweet looking woman come and sit in the same row… and you think “Oh yes”… and then 2 minutes later their bodybuilder boyfriends show up with the popcorn. Well… at least they had to pay $14 for it. Jerks.

18. Early shows that start too early. “Yeah baby, we’ll do dinner and a movie… but we have to have dinner at 4:30pm because the STUPID FRICKEN MOVIE STARTS AT 6:10!

19. People who stand in line to buy tickets and don’t actually start to decide what they want to see until they get up to the ticket girl… with 50 other people waiting behind them as they go “ummm… how about that one? Oh no… I don’t like that actor… how about that other one?”

21. Seats designed by some guy who really hates people and wants to inflict suffering

22. People who don’t turn off their cell phones. How hard is that? DIE DIE DIE!!! (no kidding, I once had a guy whose phone rang 3 different times in the same movie… justifiable homicide your honor).

23. Cup holders that aren’t actually big enough to hold the large cup. WHY!?!?!

24. When the movie you invested $40 bucks in for tickets and snacks and 2 hours of your life ends up sucking.

Still, as many items are on that list, I still love the movies (hell, there are people in my life who love me, but if you ask them to put together a list of stuff that annoys them about me their list would probably be longer).

Here’s an interesting observation though. Over the years I’ve found that when I ask readers what bothers THEM about going to the movies, things like ticket prices and commercials before the movie are often on the lists, but rarely the MAJOR complaints from people. Quite often I find that the biggest complaints people have about going to the movies revolves around OTHER PEOPLE rather than things immediately associated with the theater or movie itself. Things like:

These are the types of things that seem to get under most (not all) people’s skin the most when discussing things that bother us about going to the movies. Rude people drive us all crazy, especially in a movie theater.

It’s one thing for someone to act obnoxious on a bus or in the grocery store. After all, them acting like idiots doesn’t effect how fast my bus will get me to my destination or my ability to pick up a pound of apples. But in the movie theater, where we just paid $40 to get us in with our dates with some popcorn so we could watch and enjoy a movie…. people acting stupid detracts from our enjoyment and experience at the theater.

So the question is: What do you do about rude people in a movie theater?

Sure, we’d all like to walk up to the guy who let his cell phone go off 3 times and punch him in the mouth, but that just causes even more of a disruption for everyone else in the theater. Yes, you’d like to go up to that teenage girl who keeps babbling with her friends and kick her in uterus to shut her up and ensure she never breeds… but that’s not considered “socially acceptable”.

Here’s a great example. Last year me, Doug and the Pleasure Witch (Doug’s amazing girlfriend) went out to catch the Jim Carrey movie “The Number 23” (which was a mistake in and of itself). The PW is a busy lady and doesn’t have much opportunity to get out to a movie. So we get there, grab our seats and get ready to enjoy the flick. Unfortunately, a group of 4 babbling teenage girls were sitting right behind us. They were talking loudly, but we never said anything because we were sure they were intelligent enough to shut up once the movie started. NOPE!

Even when the show started they just kept yapping and yapping and yapping… I think Doug started looking around to see if there were any handy axes on the floor. So finally I couldn’t take it anymore… I turned around and asked very politely (almost begging): “Hey guys, we just came here to enjoy the movie. Please please please stop talking so loudly”.

Well, apparently that was the worst thing I could say, because this little group of idiots all decided in their heads they had to look cool in front of their fellow idiots. So each of them started barking back at me loudly “Why don’t you mind ya own fucking business!” blah blah blah. Doug turned around and suggested to the young ladies something about all going to the bathroom, finding a coat hanger and helping each other with their 8th or 9th abortions. You might be surprised to find out that didn’t defuse the situation (although it made me feel better).

Eventually I just had to stop trying because I realized us attempting to get these little bitches to shut up was causing more of a disturbance for everyone around us (it was a sold out theater) than the girls on their own already was. So we just had to deal with it.

So what do you do? Some people keep talking… you can’t yell “Shut up” from the back of the theater, because you KNOW they’re just going to yell back “You shut up”. Then what? Do you just keep the yelling match going that no one wants to hear?

A lot of people are apprehensive about getting an usher because it makes them feel like a rat or something.
So how have you handled situations like this in a movie theater before? What do you find usually works? What things have you tried that haven’t worked?

116 thoughts on “How Do You Handle Rude People In A Movie Theater?”