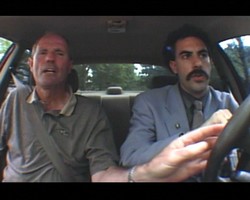 It looks like another person is stepping up to the plate to sue after being duped by Borat. The man that gives Borat a driving lesson in the film (Michael Psenicska) is looking for his fair shake. We get the following scoop from the caves of Yahoo:

The suit, filed in U.S. District Court in Manhattan, seeks $100,000 in compensatory damages and unspecified punitive damages, saying the hit movie earned hundreds of millions of dollars at the box office. It says Psenicska is entitled to damages because defendants, including producer Twentieth Century Fox Film Corp. and star Sacha Baron Cohen, used images of him extensively in advertising the film, “Borat: Cultural Learnings of America for Make Benefit Glorious Nation of Kazakhstan.”

I have mixed feelings about the “Borat” lawsuits. Release forms were signed, so legally the studio should be in the clear. But the people who signed them were clearly mislead about the nature of the project; this is one of the reasons why it is so funny. When you have a spot on a TV gag show it is one thing, but to have your face in advertising all the time, everywhere, in one of the most popular comedy films of this fledgeling century – I think you may be pushing fair usage.

It would of been appropriate in my opinion for the studio to pay out some dividends to the people that were duped. This would of been a pre-emptive hedge against lawsuits and a fair reward for people that were a huge part of a wildly successful film. Psenicska is asking for 100 000, and I personally think that it is a fair amount for him to receive when you consider how often his likeness was, and continues to be used.

I loved the film and certainly want to see more like it. But on the other side of the coin, if people are duped and then have all anonymity stripped away from them – I hardly think that is fair. Not everyone wants to be famous, most choose to eek out an existence in a humble and fairly solitary manner. If someone has their ability to blend into the crowd taken away from them, then perhaps they should get a kickback. Maybe I am way off, and I could give a fuck about most of the law, but contracts should exist so both sides are protected and have something to gain from the agreement. What do you guys think?