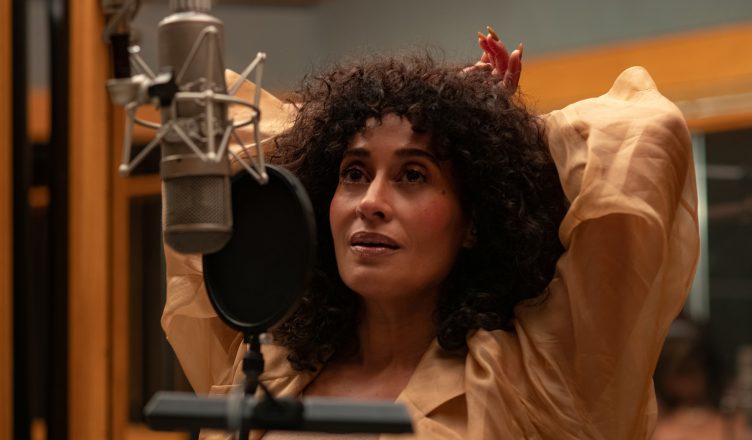 Tracee Ellis Ross is a multi-talented star best known for her roles in Black-ish, Mixed-ish, and now the feature film, the High Note. Set in the dazzling world of the LA music scene comes the story of Grace Davis (Tracee Ellis Ross), a superstar whose talent, and ego, have reached unbelievable heights, and Maggie (Dakota Johnson), her overworked personal assistant. Not only is Miss Ross starring in the feature role, but she’s also making her singing debut in the film as well. We recently got a chance to chat with her about the impact of her role and how it affected walking in her own truth.

The Movie Blog: I got the sense that you were living out your truth when it comes to singing. Did you step into your truth before this role or after this role and, what effect does this performance have on you going forward?

Tracee Ellis Ross:  I think I’ve been in the process and journey of stepping into myself and becoming more of myself for most of my adult life. I think I was on that path earlier. But it was less a specific, it was more about just like getting comfortable, and being younger. So like “who am I. I don’t get it; I don’t get it.” So the journey has been the journey. Facing one of my biggest fears and walking towards one of my biggest dreams did allow me an expansion in myself, to become even more myself and to not have a dark space of something that I was hiding.

And I don’t know where along my path I put it aside. It wasn’t conscious. I think it was partially conscious unconscious. I got busy. It’s not, like I said, I never want to do that. It was the singing. It was more, how do you do that now? And the longer you wait, the scarier it gets. It’s the same thing to a certain extent with a movie, a feature film. I’ve had small roles here and there. But then it got to the point where it was like, if I’m going to do a movie, I’m going to pick a good one. When [The High Note] came along, it was an opportunity for me to step into a part of me and a version of me that I haven’t really lived as…I mean, Grace Davis is not me in any way, shape or form. But the feelings that she’s experiencing, the fact that at this age she still has more of herself she wants to discover, more of herself she wants to share. And the world is not really looking for it. I had a real identification there.

Want to watch the rest of the interview? Head on over to the African American Film Critic Association’s Youtube channel to see the full interview.

CLICK HERE to read our review of The High Note