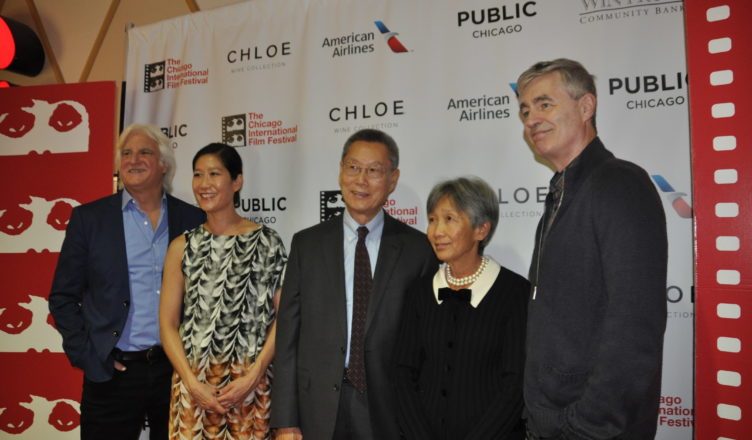 This is a saga of the Chinese immigrant Sung family who own and run the Abacus Federal Savings Bank in New York’s Chinatown. I remember reading the Matt Taibbi investigative piece on this case in his book “The Divide.” (Taibbi’s last investigative work gave birth to the film “War Dogs.”) As local Chinatown activist said, “This case is about an attack on a community. It’s about exonerating our entire community.”

Maybe this documentary resonated with me so much because I am the daughter of a scrupulously honest man who founded a bank in 1941, a bank that just celebrated its 75th anniversary on October 7th. Maybe it’s because the specter of the accused Chinese tellers being linked together in a sort of “chain gang” fashion and led into court was so unnecessary, abhorrent and unfair. Maybe it’s because this bank had, at its core, a man of the highest integrity in his community, Thomas Sung.

Thomas Sung once had to go outside in the streets of Chinatown and reassure panicked customers when there was a run on his bank caused by the arrest of a teller at one of Abacus’ branches in the eighties. My father had to sit up all night with a shotgun inside the Fairbank, Iowa bank when the banks crashed in 1939 o prevent a similar scene of hysteria and chaos. Both men were scrupulously honest and were trying to do something good for their communities.

Thomas Hung had a successful practice as an immigration lawyer when he decided it would be helpful to his Chinese-American community to have a bank where they could secure loans so they could own their homes. Banks would take deposits from their Chinese customers, but they would not loan to them. Thomas’ wife, Hwei, has gone on record as not being in favor of   founding the bank, but Thomas wanted to serve his community.

It is quite clear that the Sungs were being persecuted rather than prosecuted. You really root for David to beat Goliath and, although it took 5 years and $10 million, justice does prevail.

Abacus wrote 3,000 mortgages in a 5-year period; only 9 of those loans ever defaulted during a period in time when the foreclosure rate, nationwide, went up 555%. As one expert witness says, “If every bank had underwritten as well as Abacus, we wouldn’t have had a financial crisis.” Only 30 loans sold to Fannie Mae by Abacus had faulty documents, and some of that occurred because employee Ken Yu falsified some documents using his Chinese name (Chi Ben Yu) when everyone in the bank knew him as “Ken.” (He also lied repeatedly on the stand, proven by tapes introduced.)

Talking with Producer Mark Mitten on the Red Carpet, I asked him how he became involved in the story. (At the time he was a Producer in New York on TV’s “The Apprentice,” which got a big laugh when he admitted it during the Q&A after the documentary showed.) Mark said, “I knew the Sungs and they were trying to do something good for their community. I had known Vera Sung (one of the Sung daughters who worked in the bank and was also an attorney) for years.   I was present through much of the trial and it just smacked of hypocrisy.” I threw in the term “scapegoat” and Mark Mitten vigorously agreed that the Sungs were intended to be the victims thrown under the bus by the U.S. government as token scapegoats. As he said during the Q&A that followed the screening, “This was an atrocity. The New York Times only wrote 2 stories about it: one when it began and one 5 years later when the trial ended.”

Mark Mitten read the Matt Taibbi investigative pieces I read and contacted Steve James, a Chicago native whose documentaries “Hoop Dreams” and “The Interrupters” are well-known. As Director James told the audience, “There are 2 kinds of documentaries. One takes a position and one tries to remain neutral. This one takes the position that this prosecution was more a persecution and was a travesty. I’m dedicated to the idea that media can raise awareness. This is just an amazing story that no one knew about.”

On the night the film was shown, the Chicago Cubs were playing the second post-season game   with the Los Angeles Dodgers. Scanning the crowd, James agreed with the programming director about to introduce him that the ¾ full crowd was a pretty good showing and even told the crowd, “I’m glad there are no Cubs fans here tonight” to laughter. He also said, “I think the worst (audience) I ever had was in Santa Monica where I had about 10 people. One was a homeless guy who fell asleep. The cops frisked him and hauled him out during the Q&A.”

Nobody would be hauled out during this Q&A, nor would anyone fall asleep. Anyone with a heart will find this documentary inspirational, especially with Mr. and Mrs. Sung and their daughter Vera present. The Sungs took on the U.S. government and agreed to let the filmmakers record their decision to stand up and fight before knowing what the outcome of the trial would be. The wonderful courtroom artist, Christine Cornell, whose courtroom sketches were used, also deserves special mention and praise; she captured the haggard look of angst in the eyes of the Sungs in court perfectly.

Unlike the big bank players like Goldman Sachs (et. al.), the Sungs were not offered the opportunity to simply pay a fine and walk away. This small bank—the 2,651th largest bank in the United States—was going to be used by New York District Attorney Cyrus Vance, Jr. as an example. As a further irony, one of Thomas Sung’s attorney daughters, Chantelle (all are either lawyers or doctors) worked for Cyrus Vance at the time. She quit her job to help her family mount a defense against the unfair charges being leveled against them. The family’s ordeal would last 5 years.

It all began with one rotten apple: a bank employee who was known popularly as Ken Yu, in December of 2009. Ken Yu was running a money laundering operation on his own and accepting money from loan applicants, telling them it was the “norm” to give him money after the deal was closed, when it was not. Not only did the Sungs fire Ken Yu immediately (and 2 other employees) upon learning this, they immediately reported his wrongdoing to the Office of Thrift Management when they learned that a couple who were trying to close on a home lost their 10% deposit because of Ken Yu’s dishonesty.
Rather than applaud the Sungs for honestly rooting out the very few corrupt employees and reporting those employees’ misdeeds, as they should have, Cyrus Vance, Jr., under pressure to do something to punish the big banks after the 2008 housing crisis, chose instead to lodge charges against this very small bank, accusing them of “engaging in a systematic scheme to defraud Fanny Mae.” As one expert said, “This wrongful prosecution was totally prejudiced and incorrect.”

If convicted of even one felony, it would have very serious ramifications for the bank. An innocent verdict gave the bank a shot at continuing, but it cost $10 million. $110 billion in fines was paid by the big banks as reparation for the $22 trillion damage their dishonesty did to our economy by writing $4.8 trillion in fraudulent mortgages, but this tiny bank and this one family was subjected to 5 years of persecution, required to be in court each day to clarify any of the 600,000 pages of documents they had to submit, and the Sung family and their innocent employees were humiliated.

Anyone who knows much about Asian cultures knows that “losing face” is one of the worst things that can happen in that culture. The U.S. government systematically attempted to humiliate this bank’s predominantly honest employees. (One of them, in fact, is lodging a lawsuit against the government now that the trial is over, and all other charges have been dropped, with only Ken Yu doing jail time.

Standing in front of a Chicago audience this night, Thomas Sung (79) said “Our bank existed for 30 some years to serve the community. If we were just an ordinary bank, we could not have survived the run on the bank, etc…” He added, ruefully, “I help the people of our community become prosperous, but when they become prosperous, they move out of Chinatown and become customers of Citibank,” (a small joke) and then added, “We awakened the community to the fact that they need to be more conscious of their eligibility to vote and their need to exercise the rights given us.” He noted that 2 Chinatown residents have, in fact, run for office since the Sung family’s unfortunate experience.

Mr. Sung thanked the filmmakers saying, “For us, we are very thankful and we thought that it was a story that had to be told.” Mrs. Sung said, “It’s really strange to be standing here and to get my whole face back, meaning my honor and my integrity. I’m so glad it’s over.”