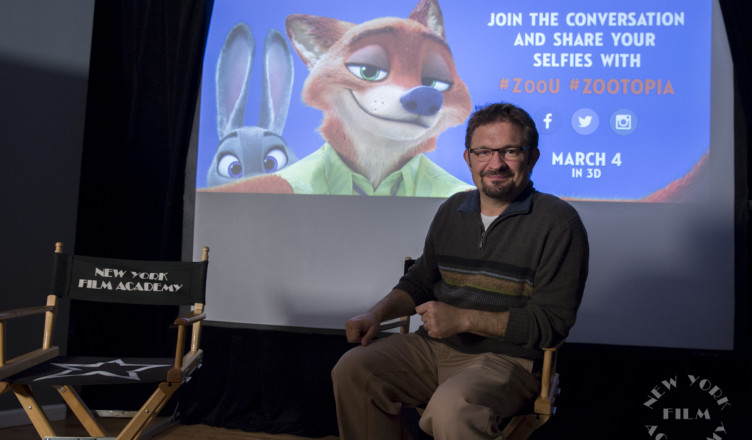 Disney’s Darrin Butters came to the New York Film Academy and exceeded expectations. The guy is incredibly entertaining and certainly knows how to speak in front of a crowd effectively. He attended to give the students some insight into the life of a Disney animator and brought along an incredibly interesting Powerpoint. Typically PowerPoint presentations are synonymous with “Wake me when it’s over” and “Is it over yet?” but this particular PP was full of curtain pulling on how Disney makes its magic. Photographs weren’t allowed, at all :-( , during the presentation but there were a few key takeaways I captured while attending:

How did he get his break? Darrin is originally from Nebraska and revealed that his break was due to his experience as a stage performer. He said something along the lines when interviewing for his job that he was told that “anybody can sit there an learn how to use a computer program, what do you bring to the table?” His experience as a performer was instrumental in securing his role because he had the insight of how a live performance should look for comparisons sake and that experience is monumental toward his end goal of a believable animation. He practiced acting and performing in his youth which helped pave the way for his future as an animator. His secret? Rather than doing his first run at an animation digitally he would perform them in his house with a pre-set camera and offer that to the director first his first draft, allowing him to provide a concept faster than other animators. He shared some personal footage of himself performing scenes that he was tasked with creating in the privacy of his house and creating some targets for his finished animation. The guy is surprisingly good at facial expressions which was incredibly recreated in his films, including a nice scene as Olaf from Frozen.

His advice? Get to know your director. They’re all different and each one has a style and preference that sets them apart from other directors. Some directors are very specific while others may allow staff to suggest ideas to them directly however each director is unique and learning their preferred method of communication for ideas is pivotal for an animator to further his career. He had a mentor that helped introduce him to this world and doesn’t think it would be bad for others to have mentors as well.

His street cred? Zootopia, Big Hero 6, Frozen, Wreck-It Ralph, Tangled, Paper Man, Chicken Little and more. The man has the experience to back up his advice for aspiring animators. As a former animation student, I commend you all for pursuing the career and wish you the best of luck. You are all better people than I. The NYFA Crowd was great and asked a lot of great studious questions and kept momentum going until the final minute. Check out the New York Film Academy site to see if they have a curriculum that catches your interest or if you may want to consider attending one of their events.