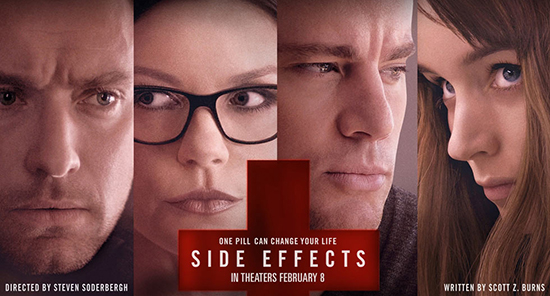 Here we go film blogsphere! We survived some brutal movies the past few weeks, (some so bad we could already have a competitive Razzie awards race for next year), and now we have been rewarded pretty early on in this year. Get ready: Steven Soderbergh’s Side Effects is the first GREAT movie of 2013! Yes, you heard correctly! Sometimes a movie this great comes out during the first six months of the year and delivers a refreshing surprise coming after an onslaught of consistently awful movies! The brief synopsis:
Side Effects is a provocative thriller about Emily and Martin (Rooney Mara and Channing Tatum), a successful New York couple whose world unravels when a new drug prescribed by Emily’s psychiatrist (Jude Law) – intended to treat anxiety – has unexpected side effects.

That’s all that needs to be said before anyone watches Side Effects. Many people will discuss the plot twists and the various  motivations of characters after watching as the films exhibits a jigsaw puzzle of great magnitude that begs for multiple viewings. This isn’t a dramatic critique on ‘Big Pharma’ with a hard hitting message ending, and instead it’s a hard boiled pulpy thriller and an exceptional piece of genre work. Side Effects has shades of a modern day, yet old fashioned, Hitchcock-ian thriller that slowly unravels in some very unexpected moments. The less I say about the plot progression, the better off the viewer will enjoy the film and indulge in the feeling of being swept away. This clever plotting rewards sophisticated audiences who pay attention and find the twists believable, with the strength of the storytelling is revealing itself in the dialogue driven drama bringing the viewer to unforeseen territories.

A word of warning for the Channing Tatum fan girls: Tatum is a supporting character in Side Effects rather than a major one and since the movie focuses on Emily, and her psychiatrist, those who are hoping to see Tatum in a majority of the film will be disappointed. Its not about Tatum but his face on the poster will be a test as to his box office appeal. (I think Tatum had both a lucky 2012, yet worked hard for his breakout success.) Rooney Mara, (who starred in David Fincher’s American version of The Girl with the Dragon Tattoo, and The Social Network), delivered an incredible and emotionally intense performance with in-depth range. Mara plays a character who is an exhausted woman that seems detached from reality and is burdened by the depression that has developed from sudden life changes. She balances a role of aggressor, victim, and pawn in the plot and toward various surrounding characters. As an actress, Ms. Mara is a force to be reckoned with for her emerging Millennial generation. Beyond chattering about the twists and turns, she is the highlight for cinephiles whom stands out as the cinematic dust settles.

Steven Soderbergh has made a career as an art house director while also producing a style for mainstream hits (Out of Sight, Erin Brockovich, Oceans 11), as well as awkward small ‘experimental’ films (Bubble, Haywire, The Girlfriend Experience), and sometimes Soderbergh makes movies that fall in between both of those styles (Contagion, The Informant, Magic Mike). This is Soderbergh’s strongest work in at least the last few years. In most of his work, Steven Soderbergh sets up certain expectations for the movie and for better or worse takes the viewer on a completely different path. You never know what you will see in one of his movies. Mr. Soderbergh claims to be making Side Effects his last movie. I hope not. Otherwise, he ends a successful career on a high note. It takes a talented director to surprise the viewer…even when we least expect it unforeseen ways from the plot twists to the release date.  The marketing of Side Effects was vague because, like most of Soderbergh’s challenging work, its in itself a challenging sell and this is especially difficult without revealing key plot points after the first 30 minutes of the feature. Go in without knowing too much and you get a lot entertainment out of it.

What did you think of the plot and performances in Side Effects? Was this a wise choice for Steven Soderbergh to end his big screen career?

One thought on “Let’s Talk: Side Effects The First GREAT Movie of 2013!”