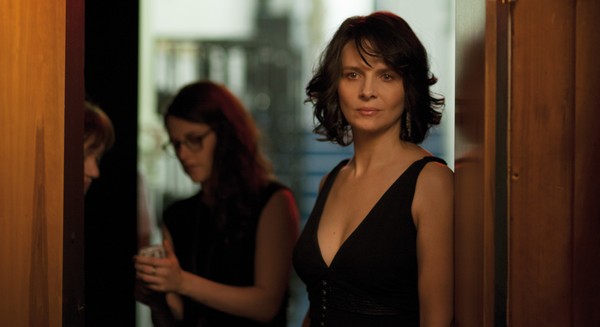 Maria Enders (Juliette Binoche) is an actress at the peak of her international career who is asked to perform in a revival of the play that made her famous twenty years earlier. Back then she played the role of Sigrid, an alluring young woman who disarms and eventually drives her boss Helena to suicide. Now she is being asked to step into the other role, that of the older Helena. She departs with her assistant (Kristen Stewart) to rehearse in Sils Maria, a remote region of the Alps. A young Hollywood starlet with a penchant for scandal (Chloë Grace Moretz) is to take on the role of Sigrid, and Maria finds herself on the other side of the mirror, face to face with an ambiguously charming woman who is, in essence, an unsettling reflection of herself. (C) Sundance Selects

Clouds of Sils Maria is the latest introspective indie that offers a behind-the-scenes glimpse of show business. Recently, Birdman was the rage swooping up big Oscar wins and wowing cinephiles (though numerous casual movie fans I spoke to were divided). A movie like this is a solid alternative for sophisticated adults not eager nor interested in something like Avengers: Age of Ultron. Much more pensive and rarely over-the-top, Clouds of Sils Maria is a serious character study embedded in a high-gloss, pretentious industry. We’ve been here before, but not in this low key, somber style. Usually a movie focusing on this subject matter is pompous and predictable. Viewers will be relieved to find a mature critique about showbiz.

The strength of Clouds of Sils Maria are the tremendous performances from the cast of talented women especially Kristen Stewart. To the shock of Twilight haters, Kristen Stewart delivers an exquisite and exceptional supporting/co-leading performance. It isn’t so much a surprise to watch someone from Twilight evolve into a talented actress as much as it is re-assuring. Accomplished actors can move beyond type casting and breakout roles. And as much as I have made fun of Twilight, Stewart deserves kudos for this work (as well as Still Alice). She will get the respect she deserves. She is the only American actress ever to win the César Award, which is the French equivalent as the Academy Award for this movie. I never thought I’d praise Kristen Stewart’s acting, but she earns it.

Also worth noting was Juliette Bionche who was ravishing as an aging actress looking to rekindle her acting spirit. This is the of performance we rarely see; emotionally raw in a very understated way. It is a role where you wish were more readily available to actresses of her generation. With few roles available to women amongst plenty of talented actresses, she excels in the role. There isn’t a scene where Bionche is overly dramatic. All of her reactions are believable and grounded in reality.

It wouldn’t shock me if one of these performances were apart of the year-end awards conversation especially Kristen Stewart. Yes, you heard me correct. Ms. Stewart was incredible shedding her image while maturing into a credible actress. I orignially saw this movie at the Starz Denver Film Festival six months ago and enjoyed re-visiting it. It absolutely holds up during a second viewing. I found the themes of loneliness, fame, and aging to be just as relevant and impactful watching bit again.