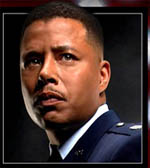 There has been a lot of discussion on the surprise news that Terrance Howard was dumped from Iron Man 2 and replaced by (the superior actor) Don Cheadle. Some hate the news, some (like myself) thought it was a shame, but happy to see Cheadle in the role. Well… according to Entertainment Weekly some new information is surfacing regarding WHY Howard was dumped.

Turns out it was for 2 reasons.

#1 – He was the highest paid actor on the movie
Yes, according to Entertainment Weekly, Terrance Howard was signed for MORE than Robert Downey Jr and everyone else on the movie. This isn’t too surprising because the studio wasn’t sure how the public would react to Downy at the time and Howard was, quite frankly, the bigger name. Still… a minor character getting more than the leads?

#2 – Howard was difficult on set and bad in the film
It’s being reported now that the studio, and director Jon Favreau himself did not like the performance Terrance Howard gave nor liked working with him that much. According to the story, Favreau spent a lot of time cutting and re-editing Howard’s scenes to make them work. It was so bad, that even though the original plan was to have a BIGGER role for Howard in the second film, Favreau had been working to make Howard’s role SMALLER. This was the final straw that made the studio pull the trigger and make the change change. If the director isn’t happy with the actor and he’s making him a smaller part but still be the highest paid??? You’d make the change too.

Anyway, my opinion of the situation is still pretty much the same. All other things being equal I would have liked to have seen Howard back as War Machine… but I’m even happier having Don Cheadle in the part now.