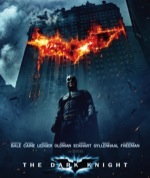 Thanks for checking out our “The Dark Knight” review. You can also check out our video version of The Dark Knight review at the bottom of this post.

**UPDATE – YOU CAN HEAR A FULL 35 MINUTE SPECIAL PODCAST WHERE DOUG NAGY AND I TALK ABOUT THE MOVIE. WARNING… THE PODCAST ASSUMES YOU’VE SEEN THE MOVIE ALREADY AND IS FILLED WITH SPOILERS. YOU CAN HEAR THE PODCAST HERE**

Batman Begins was easily the very best DC comic based film ever made. Yes, better than the Keaton Batman, yes better than the Reeve Superman. It was gritty, intense and fun all at the same time. The success of the film made it a virtual no brainer that there would be a follow up movie at some point… and the fact that Gordon shows Batman the Joker card made it even more obvious. But could another Batman flick live up to the expectations generated by the first? Would the film actually end up being as good as the fans WANT it to be? Would Heath Ledger’s performance as The Joker be as good as everyone is going to say it is regardless if he was great or horrible since there is an unwritten rule that everyone is SUPPOSED to say how great he is in it no matter what?

Well… off I went to see The Dark Knight this evening at the IMAX here in Los Angeles along with my buddy Robert from IESB, and I can tell you the film is not perfect… but it is one impressive movie nonetheless.

The synopsis for The Dark Knight looks like this: “In The Dark Knight, Batman raises the stakes in his war on crime. With the help of Lieutenant Jim Gordon and District Attorney Harvey Dent, Batman sets out to dismantle the remaining criminal organizations that plague the city streets. The partnership proves to be effective, but they soon find themselves prey to a reign of chaos unleashed by a rising criminal mastermind known to the terrified citizens of Gotham as The Joker.”

One of the things I was preparing myself for was how over hyped the performance of Heath Ledger was going to be. Since he passed away, I knew he’d be getting rave reviews out the ying yang no matter what and I’d be frowned upon if I said any different. But holy mother suck puss face… HEATH LEDGER DESERVES AN OSCAR NOMINATION FOR HIS PERFORMANCE AS THE JOKER… no… I’m not even kidding in the least. I was totally, 100% blown away like nothing I’ve ever seen in a comic based movie before. He is at all times completely believable, at all time relentlessly disturbing, at all times nightmarishly frightening and at all times THE JOKER. This is a slightly different vision of The Joker than we’ve ever seen before… but it hits the mark so purely that even Batman himself is made to feel like a secondary character. It really was the performance of a lifetime for Ledger in all its poetic tragedy. I can not stress this enough… Ledger really was that good in this flick, and if he gets an Oscar nomination (which he really should), it won’t be out of sympathy or sentimentality… it will be because it was a performance worth of the honor. Absolute best performance in a comic book movie I’ve ever seen. Yes, he was THAT good.

The script was fantastic. The story moved forward at all times, the dialog was crisp, at times profound and always in character relative to the scenario. The way all the key characters are used in vital ways in the plot… all interconnecting in a very naturally feeling way… never forced… was something to see.

The action in The Dark Knight was vastly superior to Batman Begins in every way, shape and form. And we’re not just talking about fight scenes either. There are a couple of scenes that are more like heist movies than comic book ones and they totally work. The camera work is also much better for the fight and action in this movie than they were in the original which was quite a relief since that was one of my few complains about Begins.

Speaking of cinematography… it was INSANELY good. Visually speaking, the camera did as much work in The Dark Knight communicating elements to the audience as the dialog did. It was never over the top or gimmicky either. Each shot felt purposefully selected to aide in communication the underlaying emotion and experiences of the characters on screen… while at the same time giving us a sense of vastness to the scope of the shots. I could just sit and watch this movie on mute again and I’d probably still like it just as much.

Maggie Gyllenhaal (who took over for Katie Holmes) actually made Rachel Dawes a GOOD character instead of the eye gougingly annoying one that Holmes managed to make her out to be. The Dawes character is an important one… but the way Holmes portrayed her made us all wish she was never there in the first place… Gyllenhaal made her work, and work well.

What can I say? All the cast were solid. Christain Bale, Caine, Gary Oldman (who was especially good with a much bigger and more important role this time around), Eric Roberts… the list goes on and on. When an entire cast does such a good job, you have to look at the director. Christopher Nolan sir…. we salute you!

My biggest complaint about The Dark Knight is one that no one will agree with at first… but if you think about it after a while I think you’ll change your mind… at over 2.5 hours the movie was too long. Sorry, it just was. At about the 2 hour mark I was ready to call The Dark Knight the best film of the year so far… and maybe one of the top 5 movies of the last 3 or 4 years. Yeah… THAT GOOD. Now, I have to be careful here to not give any spoilers away… so if some of this doesn’t make sense to you… it will after you see the flick. After about the 2 hour mark, a major component of the story gets finished… and it was the PERFECT time to stop the movie and be wide open to the next film. PERFECT. But instead Nolan felt the need to tell ANOTHER part to the story in this same movie… that was a big mistake in my opinion. All that energy, perfect pacing and focus that the movie had for the first 120 minutes got lost. Don’t get me wrong, it’s not that the last 30-40 minutes were bad… they just weren’t right for this movie. Something significant happens near the end (I can’t say what) that I believe was a total waste, and ultimately made the last 30 minutes a waste of time.

Scarecrow was WASTED… and I don’t mean he was on drugs. He’s on screen for about 30 seconds, then gone. Wheee… thanks for coming out. This may sound like a little bit of a spoiler, but it’s so irrelevant to the movie that it really doesn’t matter. Scarecrow isn’t even taken down like a true super villain. No no no… he gets taken down during a routine bust really. There was no need for Scarecrow to be used in that capacity… you could have had the same scene and had it be just another thug and it would have been exactly the same. Such a waste

This is a fantastic movie! Yes it’s too long, yes one or two of the characters are wasted… but aside from that it is a wonderfully told, MAGNIFICENTLY acted and beautifully shot comic book movie that ranks amongst one of the best films (not just comic book films) of the year so far. Not just a great comic movie… it is a great movie period. Overall, I give The Dark Knight an 8.5 out of 10.

CHECK OUT OUR VIDEO VERSION OF THE DARK KNIGHT REVIEW BELOW

315 thoughts on “The Dark Knight Review”