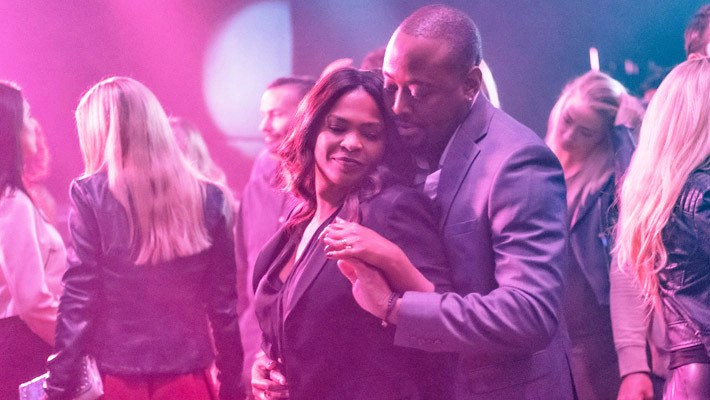 Ellie (Nia Long) tries to mend her marriage with her husband Marcus (Stephen Bishop) after a brief encounter with an old friend, David (Omar Epps), only to find that David is more dangerous and unstable than she’d realized. Fatal Affair is directed by Peter Sullivan. The acting in Fatal Affair is probably the one element that will keep you engaged the most. Nia Long delivers a solid performance in her role as “Ellie”. I liked how Nia was able to really sell the rising sense of urgency as the tension begins to rise in the film. When things begin to escalate, her acting allows you to feel that sensation as it happens. This was of course aided by a chilling performance by Omar Epps as the love crazed stalker. In an unconventional role for Epps, he definitely found a dark side to tap into for this role. I think he was effective in demonstrating how far down the crazy hole one could go.

One of the biggest issues with Fatal Affair is going to be in the poor writing. Some of the characters are just straight up dumb. Even when they’re confronted with the most sound and basic logic, they either refuse to listen or just act more stupidly. It was really frustrating to see characters do and say things that normal people wouldn’t do even in highly stressful situations. When that happens, it breaks the connection of relatability between the characters and the viewer. There were also moments where the lack of common sense seemed to become a mere plot device to enable the story (and stalker) to keep on coming back for more. When certain characters use the “hit and run” technique, it really becomes more annoying rather than thrilling. The writing woes continue with the lack of development in some of the plot. I think it was a missed opportunity to actually build up the primary affair itself. I don’t believe the affair was detrimental enough to justify the hesitation within Nia Long’s character. Had the script elevated the situation between Long and Epps’ character, then I think it would cause audiences to become more invested. However, without a substantial component to the affair, the sense of urgency drummed up in the film just feels empty. The lackluster writing did have another accomplice in crime, and that was in the overall direction of the film. For one, there was way too much hand holding and obvious foreshadowing. It made the movie more predictable and robbed it of much of the suspense and tension it tried to build. (Unless you REALLY try hard not to pay attention.)  Beyond that, I thought the failure in Ellie’s marriage wasn’t conveyed well at all. For a long time into the movie, it wasn’t clear as to why their marriage had any issues, or why Ellie was unhappy to even get herself in the bad predicament in the first place. More should’ve been shown to help audiences really sympathize, in a sense, in understanding why Ellie would be tempted to engage in an affair at all. Fatal Affair is a popcorn flick that isn’t trying to win any awards. Nia Long is charming, although in many ways, her talent feels a bit wasted given this script. The other selling point is that you may want to see just how crazy Omar Epps can be. Otherwise, you know what will happen in this movie the moment you start watching it. It’s probably best not to think too deeply about the film as you watch it so that way you can be entertained as much as possible. Fatal Affair will be Netflix’s best imitation of when BET meets Lifetime movie. If “Netflix and Chill”  was a genre, this would fit right in.

So if you’re a fan of either of those types of movies or networks, then Fatal Affair will be something you can enjoy. It wasn’t my cup of tea, but I’d suggest looking at the trailer before making up your mind on watching this film. If it sells you, then dive right in and enjoy.