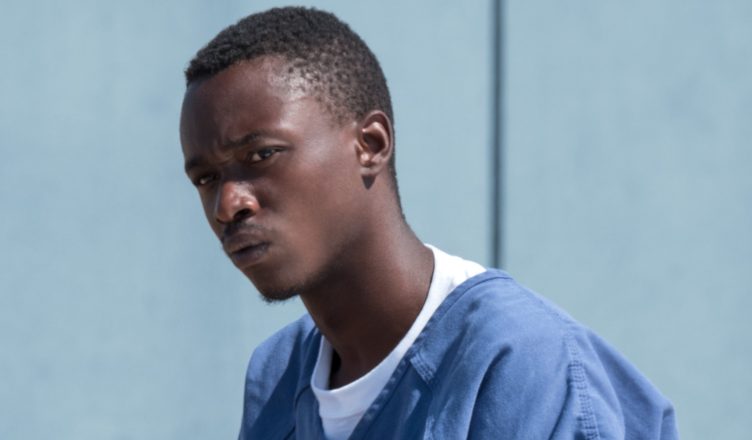 As soft-spoken Jahkor (Ashton Sanders, Moonlight) struggles to keep his dream of rapping alive amidst a gang war in Oakland, his ill-fated life and real-world responsibilities drive him further and further across the line of right and wrong with tragic consequences. Landing in prison beside his father, J.D. (Jeffrey Wright, Westworld) whom he never wanted to be like, Jahkor embarks on an unlikely journey of self-discovery, exploring the events that unite them, in hopes of helping his newborn son break a cycle that feels unavoidable.

All Day and a Night Trailer:

An easy highlight for All Day and a Night will come from its stellar cast. Ashton Sanders delivers a solid performance in his role. His voice over narration and nonverbal scenes combine together to form a convincing message. You can see the pain he’s hiding whenever he has to deal with a compromising situation. As a result, it was hard not to empathize for his character given how much he had to endure with the limited options at his disposal. Alongside Ashton was the strong acting of Jeffrey Wright. He was truly immersed into his character and I loved how committed he appeared to be in his role. Wright was able to demonstrate the internal struggle of his character doing wrong things but still striving to be better in whatever way possible.

Next up, I think this film’s bread and butter comes into play when it tackles many of the systemic and sociological dilemmas within the Black community. One issue that is emphasized well is the school to prison pipeline situation. I thought this was demonstrated well enough to give us a real life perspective of how some people in poverty simply are a product of the failed systems that surround them. All Day and a Night uses its characters successfully in a manner that put a face to issues within the educational, prison, and economic systems in poor communities. In addition to that, this film also explores some challenging themes of masculinity and personal responsibility. Although it could’ve been emphasized more, I appreciated how this movie attempted to show both the vicious cycle the characters were caught up in, and also their efforts to try and break it.

My biggest issue with All Day and a Night is the overall presentation of the film. The film is organized in a non sequential order as it chronicles the events in the life of the main character. While that normally isn’t much of an issue, it does have a negative effect on the storytelling. For example, what would’ve been the climax of the movie, is instead used as the introduction to the film. That introduction includes a bit of mystery as we’re lead to wonder the motivations that lead up to that point. Due to the editing and placement of the later story elements, that bit of mystery is lost until the very end of the film. So as a result, the emotional impact of the revelation we later learn is minimized. As a matter of fact, when you learn even more truths about some of the characters, those discoveries felt like they carried much less weight as they unraveled.

While All Day and a Night does live in the same space as a Menace II Society or Boyz n the Hood, I wouldn’t say that it’s as good as those films.  I had to give this movie a second watch, and it was at that point that more of the aspects of the story started to click. Usually that can be the situation with films that have really deep and intricate plots, but this isn’t the case here. All Day and a Night simply tries to cover more ground than it can handle because the issues and themes are that wide ranging.

All Day and a Night is nothing short of a tough watch. Sadly, this reminded me of the feeling I get when I watch a slave movie. Watching African American trauma and abuse is a lot to take in visually. (Especially for African Americans who can relate to the story in some way.) It can be draining.

I think this movie will pose a big challenge for non people of color who are unfamiliar with the dynamics at play. My concern is that some may just treat this film more as confirmation of stereotypes rather than seeing the humanizing motives that the film is trying to accomplish. The choices and consequences that characters face are real and heavy. I just don’t think there was enough of a counterbalance presented by the movie to demonstrate the intended rays of positivity.

With all that said, the performances in this film are more than enough to make it a worthy watch on Netflix. The subject matter however may be something people will need to have a continued conversation about afterwards. Proceed with caution and make your own judgement based on the trailer.