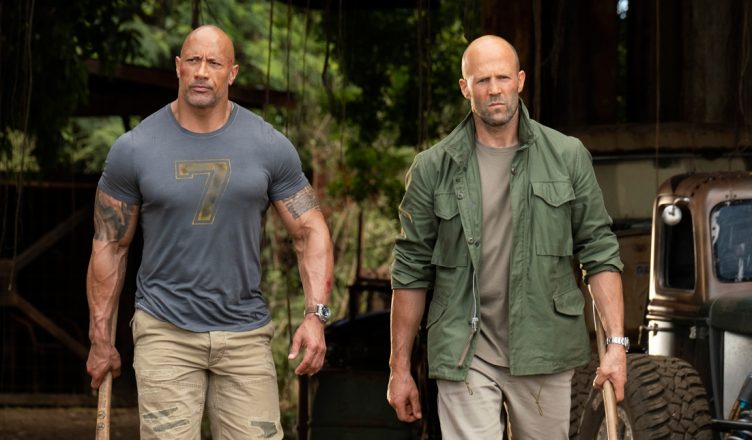 Ever since hulking lawman Hobbs (Johnson), a loyal agent of America’s Diplomatic Security Service, and lawless outcast Shaw (Statham), a former British military elite operative, first faced off in 2015’s Furious 7, the duo have swapped smack talk and body blows as they’ve tried to take each other down. But when cyber-genetically enhanced anarchist Brixton (Idris Elba) gains control of an insidious bio-threat that could alter humanity forever — and bests a brilliant and fearless rogue MI6 agent (The Crown’s Vanessa Kirby), who just happens to be Shaw’s sister — these two sworn enemies will have to partner up to bring down the only guy who might be badder than themselves.

As expected, Hobbs and Shaw delivers a plethora of high octane action from beginning to end. Personally, I think a lot of credit should go to the stuntmen and women who put in some solid work to make many of those scenes possible. I thought the chase scenes were rather enjoyable and had some nice moments of gripping suspense too. Much of that comes from some solid cinematography and visual effects. I think we get to see the visual effects at its best when we see the futuristic technology. The tech advanced motorcycle that Idris Elba’s character uses in the movie is really intriguing to see in action. One thing is for sure, Hobbs and Shaw doesn’t hold back from taking each action sequence to a higher level by the end of the film. Another highlight to look forward to in Hobbs and Shaw is the comedy. The movie doesn’t waste any time in providing rather humorous scenes. Without getting into spoiler territory, the funniest scenes will come at unexpected moments in the movie. When you eventually come across them, just be sure to try and catch the jokes as they come rather quickly. While this movie doesn’t rely on goofy humor, most of the laughs will come from the character dialogue. A definite plus for Hobbs and Shaw is how the actors are able to play to their respective strengths. Everyone is able to play a role or character that perfectly suits the actor. Dwayne “The Rock” Johnson comfortably plays to his large physique and uses that as a fun anchor for many of the jokes and action scenes. Jason Statham channels his English version of Jackie Chan by excelling in the “one vs the many” fight scenes where he gets to demonstrate his resourcefulness within any given environment. As advertised, both Statham and Johnson play off their characters’ feuding based off the previous Fast and Furious movies. Their chemistry is undeniable and I think it’s one of the better elements of this movie. Besides those two headliners, Vanessa Kirby had a solid performance. Her character brought an interesting sense of nuance that didn’t allow for the movie to get too one dimensional. Also, Idris Elba’s performance as the primary villain works very well too. He was convincing as a legitimate threat for the main characters, and given his advance tech, he made the story a bit more compelling.

While the stunts and action scenes in this movie are pretty entertaining to see, they also go way beyond belief. Some of the major action scenes defy any rational odds to the point where you may find yourself eye rolling what you’re seeing. It’s a bit disappointing because many of those scenes were good enough before they started pushing themselves to some ridiculous limits. I mean there’s literally no way any of the characters in this movie should be alive. However, characters could do something like fall out of a plane (hypothetically) and walk away with just a scratch on the cheek. Given the lack of practicality, this movie just begs for you not to think at all. Things work a little too perfectly and because of that, some of the suspense factor is negated because you rarely will think characters will be in real danger. Worst of all, some of the fight choreography looked a bit too staged all for the sake of comedy. You could almost write this movie off as being like a cartoon. As for the comedy in this movie, it’s pretty inconsistent. The dialogue can be funny at times but it gets a bit tiring the longer it goes on. The back and forth jokes will be hit or miss and you may find yourself only chuckling every other couple of jokes at best. It probably would’ve been better had the banter been shortened in half, because it was more effective in short bursts rather than the dedicated roast sessions the movie committed to. Although the action is the main draw for this movie, it equally tries to be just as funny. Since the writing doesn’t elevate the comedy that much, I really think it would’ve been better to focus on the action instead. Hobbs and Shaw is the standard definition of a popcorn flick with loads of action, a couple of laughs, and no thinking required. The more thought that you put into this film, the more frustrations you may have with it. So it’s definitely best to just sit back and enjoy the ride. You can easily say that this film is a combination of other movies like Fast and the Furious + Mission Impossible + The Transporter. If you enjoyed any of those movies, then Hobbs and Shaw is the movie you won’t want to miss. Despite any minor issues in this film, I still ended up having fun with it for what it was. Also, there are multiple post credit scenes including one all the way at the end of the credits. Those scenes are mainly comedy though and looked like they should’ve been saved for the Blu-ray bonus section. Either way, go see Hobbs and Shaw and have some fun.