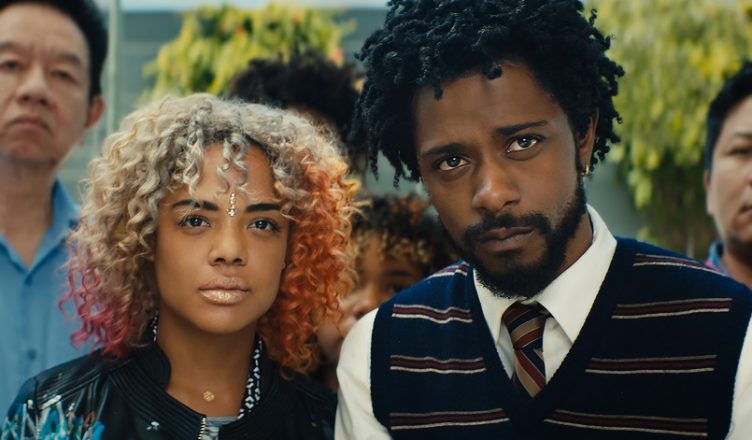 Cassius Green discovers the secret to becoming successful at his new telemarketing job. However, the more successful he becomes, the more he begins to realize the costs that come along with it. Director and writer Boots Riley is nothing short of ambitious with his new comedy film, Sorry to Bother You. The review below is intentionally meant to be spoiler free since there are some key surprises in the movie.

Sorry To Bother You Trailer:

When it comes to performances, I think the overall cast for this film was very effective. Lakeith Stanfield (who plays Cassius Green) was solid in his performance; although it’s probably safe to say that this role was almost made for him. Even though I think the film could’ve used more of Tessa Thompson’s character “Detroit”, Thompson was still great in her role. What I especially appreciated was the additional not-so-subtle messages that play out through her attire throughout the movie. As for a supporting role, I think the other standout would be Armie Hammer who represents probably a lot of what’s wrong with society in so many ways. His performance was just as out there as this movie. One of the best highlights of this film is the fact that it’s not afraid to be wildly different and ambitious with its subject matter. As you could probably tell from the trailers, one of the quirky topics depicted is “Code-Switching”. (If you’re unfamiliar, “Code-switching” is basically the verbal gymnastics of assimilation and mimicking the voice of white people by people of color in the United States. ) The film tackles this topic in a satirical manner by showing how effective code-switching can be for a minority and the success that comes along with it. What I appreciated the most with this subject was that the the film showed a nice duality of the cost and benefit of succumbing to the practice for too long. We get to the see the fine line of “selling out” and “keeping it real”.

This film touched on a wide range of topics such as class issues in the workforce, race relations, and other societal issues. I appreciated how this movie wasn’t afraid to critique our own society in a variety of ways. Some issues may be open to interpretation. Despite that, this film explores how our society deal with issues, adapts to certain ills, and what the consequences of our actions may be. Director and writer Boots Riley was brilliant in the way he was able to turn concepts into a visible reality. For example, we get a number of scenes of a telemarketing calls.  However, rather than doing a typical split screen shot, we get the two callers being transported into the same scene to represent the call in almost a more animated fashion. These types of scenes are just one of the ways this movie stays fresh and especially comedic.

Actually, staying in vein of the humor, this movie is pretty funny. No…wait. I take that back. It’s pretty damn funny. I think probably the funniest scene in the film  may be “The Rap” scene. One of the reasons why it was so hilarious was because of what that scene represents. Once you actually understand what Cassius is saying, why he’s saying it, and why he gets the reactions from the crowd. I think that’s when the joke will finally hit. The downside of making things satirical is that there’s always the risk of your message being lost. If you don’t catch the references or the underlying message, then you’re going to be lost. Jokes won’t be funny. You’ll then end up not enjoying the movie as much. So even though I may personally enjoy the film because I was able to catch many of the inferences, I do understand that some themes and motifs will not resonate with others. Not to mention that there are many “unique interpretations” in this film that will probably distract people from certain messages. I’m not going to spoil it for you, but the really “unique interpretation” at the end really makes a sharp turn in the film. Some people will be okay with it, while others will be confused by it.

One other minor issue was that there’s a certain situation that happens with Steven Yeun’s character (“Squeeze”). While his role in the movie makes sense, this particular interaction with Tessa Thompson’s character didn’t seem to fit. I didn’t think it was necessary and it really didn’t add anything to the plot in any way.

Sorry to Bother you is weird, original, funny and timely.  This is the first film that I can recall that was both a comedy, sci-fi and socially conscious all together. Sorry To Bother You is a movie that will bother you. It should bother you. A lot of the social commentary made in this film may strike home for you or someone you know. Even though this film is advertised to be a comedy about telemarketing, it’s much deeper than that. If I had to describe this movie, think of Donald Glover’s “This is America” being made into a film. Except, make the setting telemarketing agency.  I would say that this movie is reminiscent of a classic Spike Lee joint (not you Chi-Raq) with a mix of Get Out. No, this movie isn’t as great as Get Out was, but they do share the same energy and vision.

I think the best approach is to go into this movie completely cold. Don’t read anything about it, or even bother with the trailer. Just let it take you on the fantasy ride and experience it to its fullest. Be sure to check out Sorry To Bother You and when you do, go talk to someone about it. This movie doesn’t horse around.