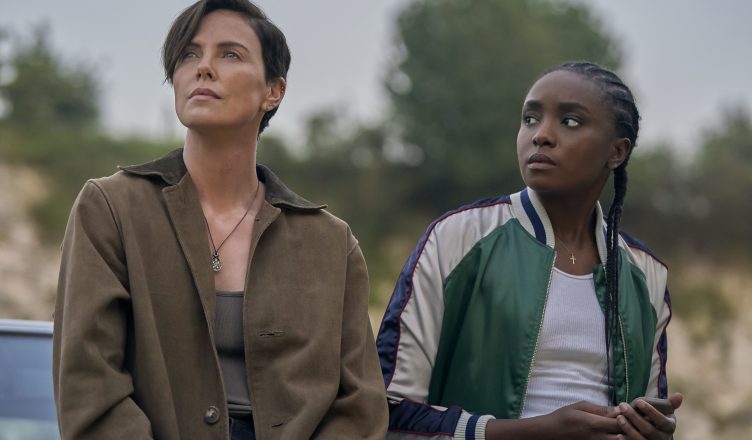 Led by a warrior named Andy (Charlize Theron), a covert group of tight-knit mercenaries with a mysterious inability to die have fought to protect the mortal world for centuries. But when the team is recruited to take on an emergency mission and their extraordinary abilities are suddenly exposed, it’s up to Andy and Nile (Kiki Layne), the newest soldier to join their ranks, to help the group eliminate the threat of those who seek to replicate and monetize their power by any means necessary. Based on the acclaimed graphic novel by Greg Rucka and directed by Gina Prince-Bythewood (LOVE & BASKETBALL, BEYOND THE LIGHTS), THE OLD GUARD is a gritty, grounded, action-packed story that shows living forever is harder than it looks.

Probably the most intriguing aspect in The Old Guard is going to come from the healing factor of the main characters. It’s one of the biggest selling points of the movie, and it doesn’t fail to deliver as promised. It’s really hard to turn away after seeing a gruesome injury quickly heal up. I think what made this believable was how the film tried to ground the healing component. For example, smaller wounds can heal quicker compared to larger wounds. In a sense, that minor difference made The Old Guard seem a bit more realistic (even in this fictional world).

Another positive for The Old Guard is going to be found in the sentimental narratives told through the characters. I appreciated how the characters were able to recount their personal stories to convey the downside of being able to live so long. I thought that brought a nice sense of balance to the other benefits they enjoyed from being immortal. It should also be mentioned that much of the acting in this movie does help to really cement these dramatic moments. Charlize Theron (“Andy”) definitely sells the emotional burden her character has to carry and it only serves to add even more intrigue into her character’s past. This was also the case with the rest of the supporting cast and as a result, you may even feel more sympathetic towards them.

My biggest disappointment with The Old Guard came from the ordinary action scenes. The combination of choppy editing and less than innovative fight choreography made the fight scenes feel less intense and inauthentic. They did a good job of highlighting the bodily injuries and the healing that followed up. Nonetheless, there didn’t seem to be very many unique components to really help the action in The Old Guard stand on its own.

It seemed like there were some missed opportunities to really showcase the extraordinary abilities of the characters. For instance, if you have warrior-like characters living in different cultures for centuries, one would expect that they have adopted different fighting styles over time. Since we do get flashbacks of the characters’ past, it would’ve been stimulating to see them demonstrate their cumulative fighting styles in various action scenes. To its credit, The Old Guard does highlight how the characters use their healing abilities to their advantage in fights. It would’ve been to the film’s benefit had they depicted more uncommon fighting tactics in combination with the healing factor to leave a unique footprint in the action movie genre.

The Old Guard is a well-balanced film that provides generic action and more unexpected drama with some heart. Don’t be mislead though. The Old Guard still kicks butt and takes names. However, if you were thinking that this film was going to be the second coming of Chris Hemsworth’s Extraction film then you’ll be disappointed. It’s not that action-packed. The Old Guard actually tries to care about its characters and their feelings and then the action comes in as a secondary priority. Charlize Theron is solid, as expected, and Kiki Layne seems to really be coming along as a co-star in this role too.

I took some time to read the graphic novel after watching the film, and I must say that the movie stayed true to about 85% of the comic. I was a bit surprised that the villain in the movie was less eccentric compared to the comics. There were also only a few minor changes in the story that were noticeable in comparison as well.

All in all, The Old Guard can make for a decent watch as a Netflix film. I get the impression that this might have actually worked much better as a series rather than a full length movie. There’s more context that could’ve been fleshed out to give the story a little more impact. Feel free to give The Old Guard a watch on Netflix when you have some time. 3 thoughts on “The Old Guard Review: Missed The Boat On Being a Unique Action Film”