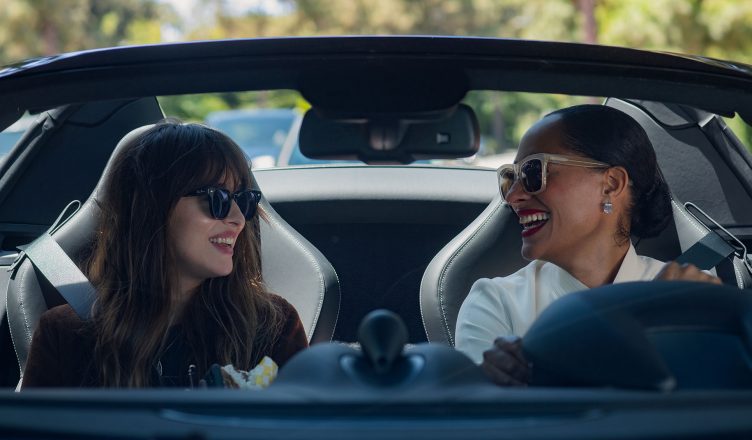 Set in the dazzling world of the LA music scene comes the story of Grace Davis (Tracee Ellis Ross), a superstar whose talent, and ego, have reached unbelievable heights, and Maggie (Dakota Johnson), her overworked personal assistant.  While stuck running errands, Maggie still aspires to her childhood dream of becoming a music producer. When Grace’s manager (Ice Cube) presents her with a choice that could alter the course of her career, Maggie and Grace come up with a plan that could change their lives forever.

One of the better highlights that carry The High Note are the performances from the cast. Tracee Ellis Ross  certainly delivers one of the strongest performances in the film. She had some of the better scenes that were emotionally charged and the most captivating. Also, as expected, Ross easily capitalized on her comedic prowess in  a number of scenes. Given her own musical heritage, this role seemed like a natural fit for Ross and she made the most of it in ever scene. This movie probably would’ve benefited had it focused a bit more on her character. Besides Ross, another solid performance was delivered by Kelvin Harrison Jr., who plays “David Cliff”. Harrison stepped into his role flawlessly and sold the charisma his character embodied. He seemed to also bring a bit more life into the scenes when paired with co-star Dakota Johnson. I’m not sure if he was actually doing the singing in this film or not, but he had me convinced that he could carry a tune well enough. Speaking of which, I’d be remiss if I didn’t mention the music in The High Note. The soundtrack was delightful and so were some of the original songs. I wouldn’t be surprised if a couple of the tracks were to become instant radio hits after a few spins.

One minor miss with The High Note for me is with Dakota Johnson’s performance. Actually, it’s hard to pinpoint whether it was her acting, the writing or a combination of both. I say this is minor because her acting wasn’t terrible, but it also wasn’t as good as what she’s fully capable of accomplishing. Her character just seemed a bit too lukewarm where the needle only moved slightly in one direction or the next. For example, there are moments in the film where Johnson’s character experiences some successes in pursuing her passion. However, I don’t believe she communicated that excitement for audiences to participate in her internal wins, so to speak. As a result, Johnson doesn’t hinder the movie, but as the co-lead of the film, she doesn’t elevate it either. Probably my bigger issue with The High Note is within the story’s focus itself. I partially blame this on the advertising of the film which creates an expectation that this story is about Johnson and Ross’ characters. Instead, the movie focuses on a third character making this about three characters, rather than the two that were highlighted. Despite that advertising misdirection, the movie still struggles to keep its attention on the characters in a meaningful way. The editing of the film may have to take a hit on the focal point of the film. There are moments when some characters get forgot about because we spend so much time in another character’s side story. I’m sure a few scenes could’ve been cut out to help reduce the longer than needed 2hr run time. Thankfully, the multiple stories do intertwine and come together at the conclusion. Although it doesn’t help that it was slightly predictable.

The High Note was a satisfying dramedy that will be greatly appreciated by music lovers above all else. If you’re a fan of Tracee Ellis Ross or just the inner workings of the music industry, then this film will be right up your alley. I think The High Note benefits greatly by coming to Video on Demand because I can’t envision this being a theatrical hit. However, by coming to VOD, I think expectations will also be lowered, and that will help make the movie a bit more enjoyable. If you’ve got the time, give The High Note a watch in the comfort of your home.