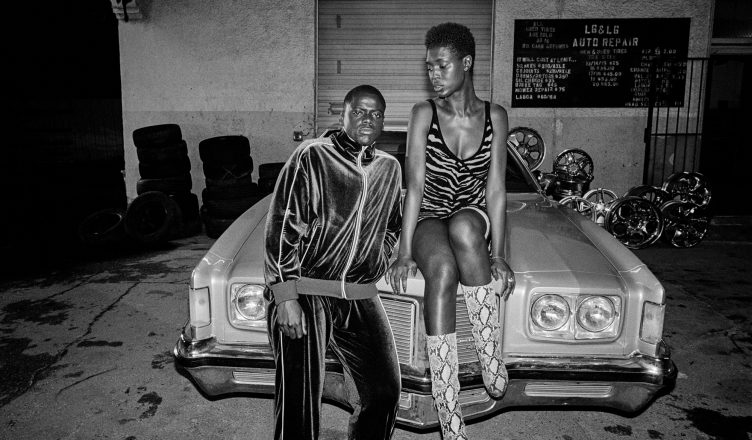 While on a forgettable first date together in Ohio, a black man (Get Out’s Daniel Kaluuya) and a black woman (Jodie Turner-Smith, in her first starring feature-film role), are pulled over for a minor traffic infraction. The situation escalates, with sudden and tragic results, when the man kills the police officer in self-defense. Terrified and in fear for their lives, the man, a retail employee, and the woman, a criminal defense lawyer, are forced to go on the run. But the incident is captured on video and goes viral, and the couple unwittingly become a symbol of trauma, terror, grief and pain for people across the country.

I think one of the strongest positives for Queen & Slim came from Lena Waithe’s writing. I found the dialogue in this movie to be rather intriguing in a number of ways. The first way was how authentic the character exchanges felt when they interacted with one another. Another way was found in the nuanced social commentary that was sprinkled throughout the film. I appreciated how the movie didn’t come off as preachy or all in your face with the commentary. What would happen is we’d have either sayings or stories or rhetorical questions that I believe were meant not only for the characters to think about but for us, the audience, as well. I think an added bonus was the representation of multiple perspectives which demonstrated the variety of views within the black community.  Furthermore, the main characters were provided with a lot of material to really help them develop as the story progressed.

Another benefit from the writing was a really enticing overall plot. I loved how this movie wasn’t overly predictable. There were some twists and turns and some shocking moments that might surprise you. Besides that, what I thought really worked for the story was how it was presented in a straightforward manner with an allegorical touch underneath. I also loved how the story focused primarily at humanizing both “Queen” and “Slim” and at the same time utilized the social impact of their actions to develop around them. So while “Queen” and “Slim” were dealing with their own personal issues, the world around them was reacting on its own accord without “Queen” and “Slim’s” intentional impact. Allowing the characters to be viewed as either villains or heroes (depending on the perspective) made this all the more compelling of a watch.

When it came to the acting, I thought we got some really good performances from both of the main leads. Daniel Kaluuya (as “Slim”) and Jodie Turner-Smith (“Queen”) had really solid on screen chemistry together. I think that both of them were able to bring out the level of growth and/or maturation that the writing desired from their characters. In terms of the supporting cast, I think that Bokeem Woodbine was a nice surprise with his role as “Uncle Earl”. Rather than just being a gimmicky character for comedic relief, I liked how his character was still complex enough to make him interesting.

I think one minor issue with Queen & Slim is that it does feel a bit long during some of the slower moments of the movie. There were a couple of lingering moments that could’ve been tightened up just a bit.  However, the length and pacing isn’t really that big of a deal unless you’re expecting this movie to be more of a crime/thriller.

Where this movie fell a bit short for me were in a couple scenes that didn’t seem to add up. Without going into spoilers, both the gas station scene (with the gun situation) and the protest felt both odd and unrealistic. I’m not sure what the intentions were for these scenes, but after thinking about the movie as a whole, those scenes felt more like they were just intended for shock value and/or tension. The gas station scene didn’t seem to add any substance to the story or the characters, and the protest scene felt like a reach. I think that while this movie is fictional, it was still attempting to be grounded in some level of practicality in American society. So to put those unrealistic scenes in the film just didn’t  seem to gel within the context of the movie.

Queen & Slim is a humanizing love story that explores an honest and uncompromising portrayal of the fears and journey of a black experience in America. The film takes a very specific fear within the black community and expounds that fear to a pragmatic conclusion. This movie was not what you may initially expect it to be from the trailers. It wasn’t a Bonnie and Clyde type of movie, although there are certainly some similarities for sure. It’s also not a movie that glorifies killing cops or painting them in a bad light. Queen & Slim is a movie about two people who are caught up in a terrible situation and we all get to see it through different lens of society.

I’ll admit, this movie really did capture one of my own fears as a black man in America. Sadly the climate in today’s society is a real concern for minorities, especially with police relations. So having a movie depict a seemingly harmless situation go terribly wrong definitely struck a cord that I’d imagine many minorities would never wish to partake in. I think it would’ve served the film a bit more had it dug a little deeper into WHY “Queen & Slim” had to go on the run because I would imagine that some viewers may miss the complexity of the situation from a legal and societal point of view. Nevertheless, what makes this movie so interesting to me is that the social commentary in this film is one that everyone can benefit from to some degree. We all get an opportunity to really challenge our own potential implicit biases through various characters in the movie. I think the best way to approach this movie is with an open mind because this film is not trying to be what you may expect. Queen & Slim was a great watch in my opinion and I’d definitely recommend seeing it in theaters. I had the opportunity to see this Queen & Slim it with a predominantly black audience and that was a really interesting experience. The reactions to the movie were varied and it immediately got people talking. I think those are all good signs of a good movie.