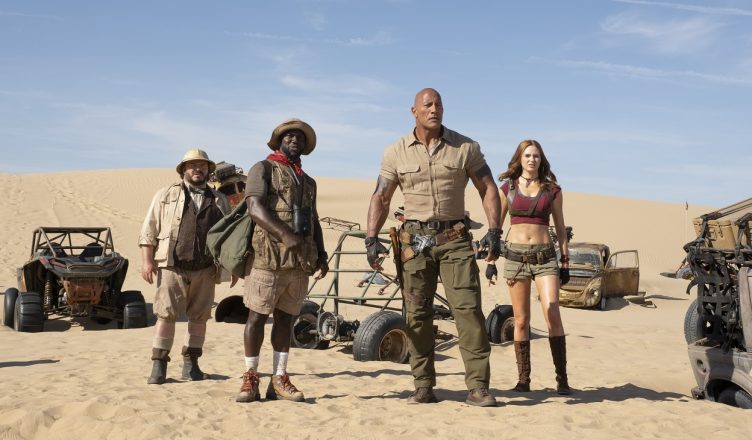 In Jumanji: The Next Level, the gang is back, but the game has changed. As they return to Jumanji to rescue one of their own, they discover that nothing is as they expect. The players will have to brave parts unknown and unexplored, from the arid deserts to the snowy mountains, in order to escape the world’s most dangerous game. Jumanji: The Next Level stars Dwayne “The Rock” Johnson, Kevin Hart,  Karen Gillan, Jack Black, Nick Jonas, Awkwafina, and more.

Jumanji: The Next Level Trailer:

Jumanji: The Next Level Video Review

Fans of the previous Jumanji reboot will probably be happy with the many familiar beats that were used in this sequel. The continuation of running jokes  and similar plot structure were a nice treat as they were expanded upon in this film. It almost gave the impression of being in on an inside joke. Most of the video game references and jokes did land, and with the new cast, it was fun to revisit some of the rules of that world. Furthermore, the animals that we were able to see brought about some nostalgic feeling of which the franchise is best known for. The biggest highlight of this film, of course, came from the cast of actors. More specifically, the crux of this movie was how well the actors were able to do their impersonations of each others’ characters. While the younger counterparts of the characters weren’t the biggest draw, the video game characters kept your attention the most. Kevin Hart easily fit into his role of playing and mimicking Danny Glover’s character, and Hart was even funnier whenever he made fun of himself. Jack Black had some moments towards the later half of the movie that really helped him find his groove again. However, despite all of the other solid performances, the real scene-stealer was Danny DeVito. He was hilarious with his eccentric character and was the definite crowd-pleaser.

The odd thing about this movie is that there were some highs and lows when it came to the story. I would probably say that the first act was pretty good, while the second act took a bit of a dip with a few spattered laughs here or there.  The final third act picked up the pace, however, it lacked the exciting, thrilling punch that the previous movie delivered. I think part of that was because this film tried to focus more on the characters and their funny impersonations. As a result, the movie lost focus on the dangerous perils of Jumanji. In fairness, there were probably two real scenes (let’s call them the “birds” and the “bridge scene”) where a real sense of urgency could be felt. I don’t believe there were many moments where one would feel as though the characters were in legit danger. I think this film could’ve benefited greatly with more animal threats. Instead, it felt like a missed opportunity to show us the vast variety the Jumanji world could provide. Since the movie did try to highlight more of the character impersonations as its backbone, there were moments when that emphasis either worked or not. Without going into spoilers, I’d just say that there were some cringe-worthy moments when some of the cast would impersonate Ser’Darius Blain’s character (“Fridge”). The strange thing about it is that “Fridge’s” character really didn’t have anything significantly distinctive about how his character spoke. It’s not like he had a heavy dialect, or accent, or anything to make him distinguishable if someone else were to impersonate him. So when the time came to impersonate him by some of the other characters, it felt like we just got a stereotypical “generic black guy” voice instead. Fortunately, this didn’t last very long in the film, and the actors didn’t over do it. Either way, it was still something that probably could’ve been resolved had the actors simply chose to impersonate different characters. It didn’t ruin the movie or anything, but it just felt a bit off to me. Lastly, and I’m honestly surprised to even be saying this, but the weakest aspect of this film came from none other than Dwayne Johnson. He just did not seem to be in his element when it came to his character impersonation. Yes, he still does those classic go-to funny moves like showing off his ridiculous strength, or fully committing to his smoldering intensity. However, the impersonation act that he tries to pull for the majority of this film was just not good. To be clear, his performance was funny, but not for the same reasons the other actors’ performances were humorous. For example, in the last Jumanji movie, Jack Black stole the limelight as the teenage girl because he nailed all of her mannerisms and her voice. Johnson in this case, seemed like he was trying so hard to do his impersonation that his attempt is where the humor lied and not his execution.

Jumanji: The Next Level was a laugh out loud experience that is more of a comedic showcase than it was an adventure. Thinking back to the Robin Williams’ Jumanji, or even the previous reboot, reminded me of how the humor was secondary and the adventure was the primary catalyst. I think this film shifted their priorities a bit to highlight all of the characters more than the dangerous jungle game itself. That’s not really a terrible thing, but I do think that it’s important for managing expectations. Jumanji: The Next Level was definitely worth watching in theaters and it’s perfect for the family to go see. Get ready to laugh and have a good time.