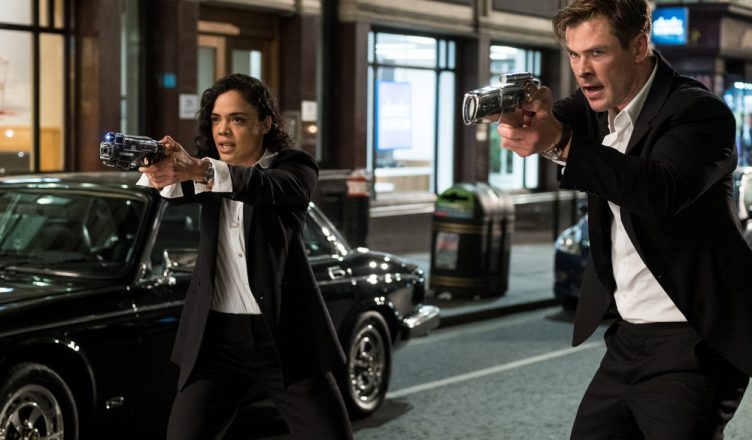 The Men in Black have always protected the Earth from the scum of the universe.  In this new adventure, they tackle their biggest, most global threat to date: a mole in the Men in Black organization. Men In Black International stars Chris Hemsworth, Tessa Thompson, and more.

Fans of the MIB franchise might appreciate how this film serves as a continuation and not just a total reboot. There are some nice and subtle references throughout the film that pay homage to the previous MIB movies. One way this happens is through the return of some familiar characters. Another way this film pays homage is through its comedy. You’ll be able to tell pretty early on that not only does the movie not take itself too seriously, but it also pokes fun at itself and previous MIB movies. While newcomers to the MIB films may not catch all the humor, fans of the previous movies will probably catch most of the inside jokes. As expected, Men In Black: International (MIBI) had a steady handle on showing us a world full of aliens and more. It was nice to see new and different types of aliens as the film progressed. I think the benefit here is that whether you’re new to the franchise or not, the submersion into this alien filled universe is done pretty well. Many of the aliens were visually fascinating to see and they will undoubtedly keep your attention whenever a new alien is seen on screen. Not to mention, it was cool to see some of them demonstrate new powers or abilities. Along with the aliens themselves, MIBI seemed pretty fun when it would display various types of futuristic or extra-terrestrial technology. While some of the guns that they used did start to look a bit too similar at times, the arsenal of the MIB agents was fascinating to some degree. Essentially from the aliens to the technology, you’ll get a very familiar sense of nostalgia if you’ve been a fan of the franchise. It’s fair to say that dynamic shared between Chris Hemsworth and Tessa Thompson was the primary force to carry this movie. Their on screen chemistry is undeniable and they do keep your attention when they’re both on screen together. Their back and forth banter was probably the most entertaining aspect of their performances. Along with them, I thought the other supporting roles played by the Bourgeois Twins were pretty intriguing. The special effects used for their characters were definitely a sight to see, and I would’ve liked to see a bit more from them. I think they worked especially well in this film mainly because they didn’t have to say very much, and their unique dance movements only enhanced their alien roles.

First things first, the comedy in this movie is hit or miss. You’ll probably get a chuckle here or there, but you’ll be waiting a while for that next bit of laughter. There didn’t seem to be any notably hilarious scenes that would really standout. To be more specific, the main reason why the effectiveness of the comedy is inconsistent is because of the editing. For instance, the back and forth banter in this film does work, but only for a moment. There will be times when the characters are going back and forth, and after the 5th barb you’ll probably ready for them to just move on. That, in my opinion, is on the director to simply cut it short and assist with making the editing a bit tighter in the film. Not knowing when to stop a good joke is ironically can also kill the humor pretty quickly. Unfortunately, while Hemsworth and Thompson were the best part of this movie, their characters suffered a bit too. Their performances were fine, but the writing and direction of this film didn’t help them at all. The writing gave them characters that lacked any real sense of depth compared to the likes of Tommy Lee Jones or Will Smith in the other MIB movies. Both Thompson and Hemsworth felt like they were a bit too bland and similar,  rather than being two different people who could complement one another in a more contrasting way. It would’ve been nice to see both characters have starker differences that they could later play off one another in a better fashion. Moving on, the plot in this film was the overly predictable. If you pay attention, you’ll probably guess the big mystery within the first 10 minutes of the movie. Because of this, it became hard to care about the story. You see all the signs, and the foreshadowing, and it completely negates the experience of trying to figure out the mystery in the story. Not only that, but it was rather difficult to even care about the world-ending stakes too. At no point in time did I ever really feel the sense of urgency of the world coming to a potential end. To be fair, having a predictable plot in an action comedy film normally isn’t the worse thing in the world. However, that’s typically because we’d be focusing on the main characters themselves This plot lacked any real focus on Hemsworth or Thompson’s character growth. As a result, they weren’t all that relatable and when a dramatic moments occur, any level of emotional impact fell short. Men In Black: International is a generic, unimaginative, cookie-cutter MIB film that will probably be forgotten without the help of any neuralyzers. The nostalgia and recognition behind the MIB brand name will probably the driving desire to see this movie. It will be entertaining but only to a degree. Men in Black: International is watchable, and just slightly entertaining but only to a degree I think that once it’s seen, there won’t be very much need to revisit this film, or franchise, again any time soon. There’s also no need to rewatch the previous MIB movies before seeing this one. Only thing that will happen is you’ll end up wishing for Will Smith to make an appearance in this movie in any way shape or form. I’d probably recommend a matinee viewing at best with this and keep expectations very low going in.