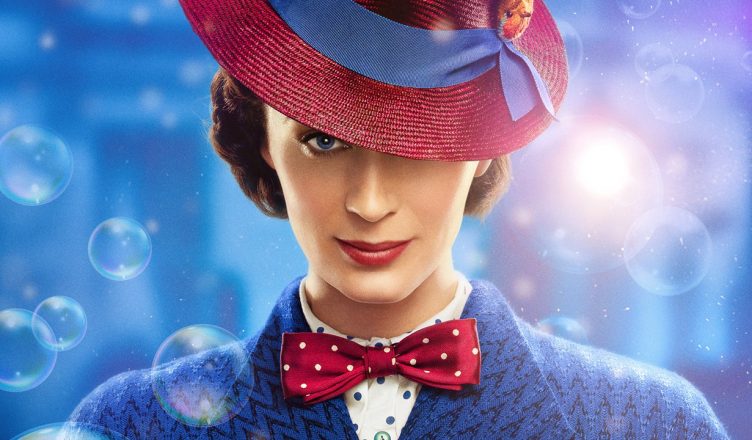 In Disney’s Mary Poppins Returns, an all new original musical, Mary Poppins is back to help the next generation of the Banks family find the joy and wonder missing in their lives following a personal loss. Directed by Rob Marshall from a screenplay by David Magee and a screen story by Magee & Marshall & John DeLuca based upon the Mary Poppins Stories by PL Travers, the film stars: Emily Blunt as Mary Poppins; Lin-Manuel Miranda as Jack; Ben Whishaw as Michael Banks; Emily Mortimer as Jane Banks; Julie Walters as Ellen; Pixie Davies, Nathanael Saleh and Joel Dawson as the Banks children; with Colin Firth as William Weatherall Wilkins; and Meryl Streep as Cousin Topsy. Emily Blunt is supercalifragilisticexpialidocious in the role of Mary Poppins. She’s a dead ringer for the role, and her performance was exceptional. She was very impressive with her singing ability and even more so entertaining with her dance routines. Blunt brings back memories of how movie actors in the past were tasked to display multiple talents at once in their performances. As Mary Poppins, Blunt was charming, firm, nurturing and practically perfect in every way.

Right alongside of Blunt was Lin-Manuel Miranda showcasing his own unique talents as well. While he was no Dick Van Dyke, he certainly brought a bit of his Hamilton talent to the big screen. His on screen presence alone makes this film feel like a live action Broadway show. He was fun and charming, and an excellent compliment to the film as a supporting character. I also thought that Ben Whishaw gave a sentimental performance as the now grown up Michael Banks. I’m probably a little biased, but I thought his role as a loving father, struggling to provide for his family, made his character relatable and sympathetic. When it comes to the plot, I thought it was pleasant and heartwarming. There were a number of emotional moments in the film, but then they’re quickly chased away with fun or delightful scenes.  I thought it was compelling that there was a slightly darker element introduced into the film. I thought it was pretty intriguing that this change of pace connected both reality and the world of imagination of the characters.

Mary Poppins Returns has some fun surprises and cameos for fans of the original film. There are a number of references and familiar characters that will be sure to please the nostalgic factor. It was nice to see that this film continued to merge live action with animation, which will be a nice treat for younger audience. One issue with this film is that it follows practically the exact same format as the original. As a result, it kind of makes the movie rather predictable and doesn’t feel all too original. As a matter of fact, the main challenge that family faces in the movie is really predictable if you pay attention to an obvious detail. Mary Poppins Returns isn’t some murder mystery or anything that really demands surprising twists or turns. However, the similar format almost gives the impression that this film can’t make up its mind on whether it should be a true sequel or just a more modern remake. Nevertheless, I think it was a missed opportunity to introduce something slightly fresher to both new and older audiences.

Another minor issue is that this film is almost just as long as its predecessor. Given the fact that this movie is geared towards younger audiences, I think that the extended run time may wear thin on children’s attention spans. I could only imagine that once the cartoons and the magic scenes are not happening, then smaller children will start to lose interest. Lastly, I’m not sure if there was anything all too memorable about this film. Maybe not enough time has passed for me to tell. Maybe the expectation for something memorable is too high due to the classic status of the previous film. It’s probably more of the later, but I guess I was a little disappointed that there wasn’t something in this film as unique as supercalifragilisticexpialidocious.

Mary Poppins Returns is a wonderful, fun sequel to a classic film. I’ll admit that since the older movie came out way before my time, I was never able to watch the movie in completion. Instead, I’d see the movie in bits and pieces over time, and probably turn away the second a commercial came on. In preparation for this sequel, I took some time to sit down and watch the original in completion, and may I just say, it does still hold up. Oh and let me say this too. There’s not a soul on this earth that could convince me that Mary Poppins isn’t a former member of Hogwarts. In my opinion, I think she’s a witch in the Harry Potterverse according to the popular theory. If you’ve seen ANY Harry Potter or Fantastic Beasts movie, then it’s really hard not to believe that to be the case.

Anyway, whether you’ve seen the original Mary Poppins film or not,  I think that the best way to approach this film would be to watch Mary Poppins before watching this film. There are some story elements and characters that will make more sense after a fresh watch. You’ll appreciate more of the references and callbacks since this movie feels like it doesn’t skip a beat from the first film.

Mary Poppins Returns may not live up to the exact level of fame that the original has over time. However, it’s most definitely a worthy film to go see with the whole family. Feel free to check it out in your local theater.