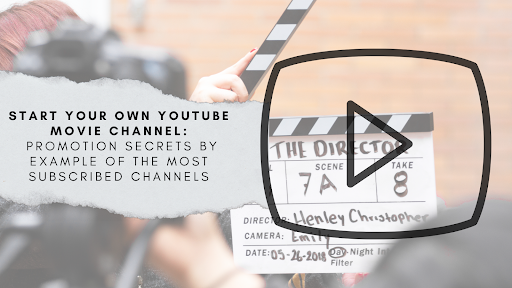 If you’re a big fan of movies, you probably love to talk about them. Why not start your own YouTube movie channel and share your thoughts with other fans? This is a great idea, but there are already lots of YT channels out there, so you’ll need to do some promotion work if you want to grow your channel and monetize it. One way to boost organic growth at a cheap rate is to buy YouTube subscribers, real ones only. Here are some other great promotion secrets by example of the most subscribed channels:

Find Your Own Lens To View Movies Through

On the Cinema Therapy channel, which boasts more than 736, 000 subscribers at last count, a professional filmmaker and his therapist best friend analyze movies from a psychological perspective. They delve into what we can learn from movies about relationships, family dynamics, and dealing with difficult times in life. In each episode, the hosts choose specific scenes from the movie and point out a character’s actions and how these reflect on their psyche. They also keep the viewers involved by asking the audience to reflect on how they respond in similar situations.

You don’t have to focus on mental  health or psychology, but try to think of ways in which you can develop your own lens. Maybe you deconstruct movies based on the characters’ costumes or set design choices. Maybe you discuss each movie’s portrayal of current issues or the deeper meaning behind plot devices. Consider how you as an individual view movies, and decide which lens your audience might want to look through with you.

Riff On A Popular Concept

CinemaWins is essentially the opposite of a popular channel called CinemaSins where hosts sarcastically point out a movie’s flaws. Boasting 1.97 million subscribers, the CinemaWins channel focuses on appreciating the good points of movies, even flawed ones. The host took a popular concept – ragging on what’s wrong with movies – and turned it on its head. This channel also inspires viewers to reconsider how they view movies and if they have judged one unfairly.

This won’t work for everyone, but if you can think of a popular channel in the movie niche, and a way you could design your content to do the opposite, you may be able to build on their success. Having a similar name doesn’t hurt either.

Creating a series focusing on a single topic or idea is a great way to hook new subscribers. If you can get people interested in one video, they may quickly watch the others in the queue, bumping your numbers for multiple vids. They might also be more inclined to subscribe.

Not all of your videos have to be part of the series, and you can have more than one. Each series should use an easily recognizable formula, like Fandor’s “Why We Love” series. The Fandor channel, which has 194,000 subscribers, produces these videos that focus on a particular actor’s strengths. They all follow the same formula, listing reasons people like the actor and giving examples from their career. The videos are also around the same length and visually similar.

Everyone Loves Listsicles, But Put Your Own Spin On Them

ScreenRant averages about two video uploads a day and now has a large amount of movie-related content available. Browsing their channel, you’ll notice that many of their videos are listsicle-style – 15 Plot Holes You Missed in Your Favorite Action Movies, 10 Movies That Predicted the Future, 10 Actors Who Refused to Use Stunt Doubles, etc. Lists are particularly popular with Millennials, because they offer digestible info on a topic in an entertaining, time-efficient way. This may be why lists are shared a lot on social media, which raises their visibility and drives traffic to a channel.

You can try doing listsicles on a broad range of topics related to movies, then narrow down to a niche you can do a series on after seeing which lists do the best in terms of views. Choose quirky or surprising list titles to draw viewers in, like “X Things You Didn’t Know About Y Movie.”

You’ve probably read a lot about using SEO and Google AdWords to find the best keywords for each video. You can fine-tune this approach by looking at Google search prompts and figuring out which of the terms you’re considering pull up videos first. For example, people searching for “tutorials” get video content first, while those looking for “tips” get articles.

Once you have your keywords, be sure to use them in the first half of your video title – this is why ScreenRant uses the movie name in the first half of many of their titles. A lot of people out there are searching for “Encanto” or “Spiderman.” You should also add a few keywords in a reasonable place within your video description and general keywords in your About page.

Use Custom Thumbnails for Each Video

Although YT will choose a random thumbnail for your video, you can and should create and upload your own. The ones the site chooses may be blurry or stopped in an awkward place. Thumbnails can also be used for marketing purposes. Notice how ScreenRant’s logo appears on all their thumbnails. Cinema Therapy’s thumbnails have the channel title at the top, then the name of a psychological issue discussed in the video lower down on the graphic – “Toxic Positivity,” “11 Warning Signs of Gaslighting in Tangled,” “Zootopia and Implicit Bias,” etc.

To make room for text and ensure this small image is easy to make out, many creators use a single image of a face on this type of graphic, but sometimes busier images can work. The important thing is to be consistent so all thumbnails immediately identify the video as your brand.

While not a movie channel, Mr. Beast has more than 88.6 million subscribers at the time of this writing, and some great promotion methods you can steal. Checking out his channel, you’ll see he has multiple challenges in which he gives away millions of dollars. A lot of people do giveaways, but Mr. Beast often involves other top YouTubers and creates challenges just for them, like playing extreme hide-and-seek in the world’s biggest stadium. By working with other popular accounts, he attracts some of their audience as well, and gains new subscribers.

But you don’t have to start with the biggest accounts or give away a million dollars, as these options aren’t practical for most people. Instead, try to think of ways to involve other accounts in your channel’s area, movies. You can make a list of the most popular accounts in your specific niche – say, people who review horror movies – and then add adjacent niches, like supernatural or science fiction channels. You could also add people who post about horror books or TV shows, comic book collectors, etc. Then start contacting the people on this list and ask if they’d like to be on your show. You can offer to interview them or suggest a joint video or challenge you can both post on your channel, like a fan giveaway or contest.

With these promotion secrets from the most subscribed YT channels, you’re ready for your closeup! Remember that promotion takes time, and consistency in your efforts will help your channel grow.