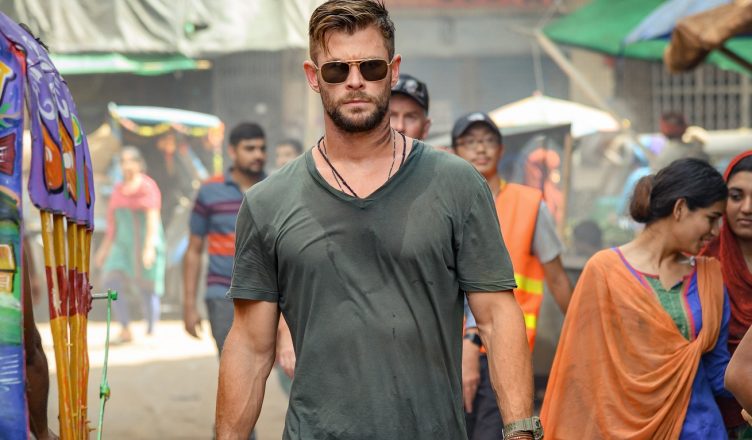 Tyler Rake (Chris Hemsworth) is a fearless black market mercenary with nothing left to lose when his skills are solicited to rescue the kidnapped son of an imprisoned international crime lord. But in the murky underworld of weapons dealers and drug traffickers, an already deadly mission approaches the impossible, forever altering the lives of Rake and the boy. An action-packed, edge-of-your-seat thriller directed by Sam Hargrave, EXTRACTION is an AGBO Films and TGIM Films, Inc. production, produced by Joe Russo, Anthony Russo, Mike Larocca, Chris Hemsworth, Eric Gitter, and Peter Schwerin.

First and foremost, as promised from the trailers, the action in Extraction delivers on multiple levels. The stunt choreography was really entertaining to watch. I thought Chris Hemsworth did a fantastic job of delivering some intense fight scenes. He was very convincing during many of the shootouts and really excelled during the hand to hand combat moments. For example, you’ll notice multiple times that Hemsworth has no problem giving everyone a hearty kick to the gut, and isn’t afraid to provide a good old fashion butt whooping to anyone, any time, and at any age. Hemsworth wasn’t the only factor that made the action in Extraction work so well. In addition to his performance, much of the action landed due to some excellent direction from director Sam Hargrave. His former experience as a stuntman clearly paid off big time because every scene that wasn’t drama filled was full of intensity and suspense. As mentioned before, the fight choreography was great, but so were the coordinated stunts. Some of the stunts were pretty wild and what made them even better was that you don’t even see or know when they will happen. That spontaneity will definitely keep you on your toes while watching. I should also mention that the cinematography really enhanced all of the action in Extraction. You’ll probably notice that whether it’s a fight or gun shootout or some other scenario, there’s the appearance of a continuous shot during the entire sequence. Without all the different cut scenes, the film certainly feels much more authentic in its presentation.  One moment that will really stand out will be the thrilling car chases. The cinematography used for those moments puts the camera in intriguing positions like being right over Hemsworth’s shoulder. This way, you get the feeling as though you’re right there in the thick of the action being pulled along. For instance, you’ll noticed how they find a seamless way to take the camera shot from the streets and then all of a sudden right into the backseat of a high speed chase. That was just some great camerawork at play.

Unfortunately, Extraction isn’t very much of a deep story and neither is Hemsworth’s character.  There’s not enough time given to really care about the drama Hemsworth’s character is enduring. We barely get enough time to really get to know him in order to feel for him during some tough moments. That is not to say that Hemsworth doesn’t do a solid job in his acting performance. Nor is this an issue with the actual writing. This is more an issue with the structure of the film. There are occasions where the movie doesn’t feel like it’s only about Hemsworth as we’re also made to care about another unsuspecting character. In a sense, by giving that supporting character more time, it kind of detracts from Hemsworth’s character. So as a result, some of the dramatic effect is missed despite the fact that you can see the intentionally placed flashbacks and a teary-eyed Hemsworth try to draw it out. It may make sense on paper, but it’s hard to say that many people will care about the emotional elements right after witnesses a bloody gun fight.

Extraction brings a ton of a well organized action scenes that will certainly keep audiences entertained from beginning to end. It has the ruthlessness of a Rambo film mixed with the exciting stunts of a John Wick movie.  Unfortunately, that’s about all it has to really offer. Thankfully, most people who are signing up for these types of action flicks aren’t looking for the softer emotional stuff anyway. So in that case, Extraction does exactly what it needs to do to be an effective film. While this may have been a matinee quality film in a theater, it makes for a perfect viewing at home via Netflix. Feel free to give Extraction a watch when you have some time. One thought on “Extraction Review: If John Wick And Rambo Had A Baby”