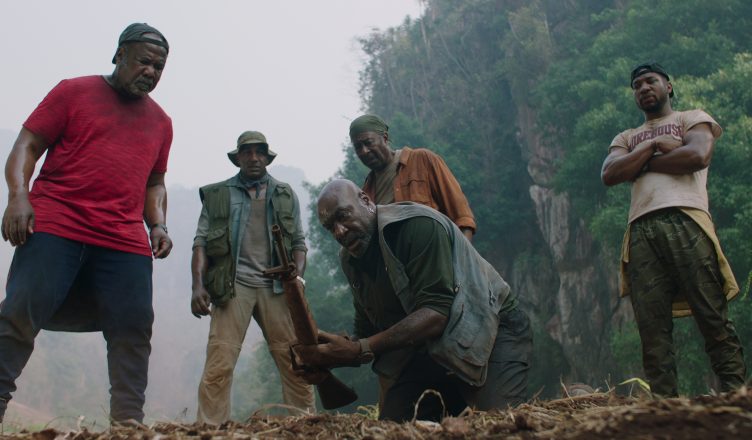 From Academy Award® Winner Spike Lee comes a New Joint: the story of four African-American Vets — Paul (Delroy Lindo), Otis (Clarke Peters), Eddie (Norm Lewis), and Melvin (Isiah Whitlock, Jr.) — who return to Vietnam. Searching for the remains of their fallen Squad Leader (Chadwick Boseman) and the promise of buried treasure, our heroes, joined by Paul’s concerned son (Jonathan Majors), battle forces of Man and Nature — while confronted by the lasting ravages of The Immorality of The Vietnam War.

There’s absolutely no denying it, but Delroy Lindo’s performance in Da 5 Bloods is one of the best elements in the film. Lindo benefits greatly given the deeply rich and complex aspects in his character, “Paul”. We see the multiple layers and conflicting issues his character experiences reveal themselves over time. What made his performance so captivating is that he constantly makes the audience question whether we should empathize, relate, cheer for, or root against him. Lindo’s delivery in every scene is mostly effective due to the level of passion and commitment he exhibits in some of the most tense moments of the film. While the rest of the cast also provided some stellar acting, I think much of that was aided by the intriguing themes in the film.

Da 5 Bloods tackles a number of themes that really gives the film a lot of substance. One of the themes explored is that of fatherhood between Paul and David’s character (played by Jonathan Majors). The most appealing thing about this dynamic was how turbulent the relationship was between the two. When you dig down deep enough, you can still see the push and pull of paternal love that exists. You see a son doing whatever it takes to seek the love of his father, and a damaged father struggling to love his son the best way he knows how.

While there are other themes at play, I particularly thought the most important one in Da 5 Bloods was the problematic relationship between being an American war veteran and being Black in America.  From the very beginning we get see how this dynamic is both an internal and external strife. I thought the Da 5 Bloods was successful in communicating the messiness of how the American ideals don’t always apply to Black people and the film  placed that notion in a more humanizing manner.

Finally, Da 5 Bloods maintains an artistic vision of mixed cinematography and editing that seeks to communicate clear messages. Spike Lee is no stranger to making his messages overt and obvious through the use of his characters dialogue and in the visual style of the presentation of his films. In Da 5 Bloods, there’s a blending of images and historical videos to help emphasize the historical references that are being evoked. I think the benefit in this approach is that it amplifies the figures or events with more than just rhetoric that can easily be dismissed or forgotten by viewers. It’s more effective when people can both see and hear something to make the impression more long lasting.

I had a few minor issues with the film, and one of them was the choice to use the same actors to play in flashbacks. Whenever the flashbacks happened in the movie, especially with the younger Chadwick Boseman appearing, it felt very awkward to still have the older actors portraying their younger selves.  I almost got the sense that they were going for a similar effect with the Irishman, but maybe changed their minds on using the de-aging visual effects. Granted, I did get over it after a while, but it was still nevertheless distracting for the first third of the film.

Another minor issue was in the pacing of the film. Spike Lee is no stranger to making films longer in their runtime, and Da 5 Bloods was no exception with its 2 hr 30 min runtime. It was a bit offsetting because it was confusing to know the direction of the film itself. For the first two acts, it felt like this was a movie where we were going to just get to know the characters and maybe just examine their inner struggles. However, with the final act turning more into a cinematic movie, it made me question if we needed other scenes in the film. For instance, I could easily imagine trimming down some of the “Chicken scene” because it started to feel repetitive. Thankfully, it led to a fanatic sequence with Lindo’s character, and thus I can also see why it was left in the way it was. The editing and pacing of the Da 5 Bloods isn’t  a deal breaker for me, but I can see how it may dissuade others.

Da 5 Bloods is a stirring wake up call given current events while also being a poignant history lesson for anyone unaware of the complicated relationship between being black in America and American patriotism. Delroy Lindo delivers a mesmerizing performance alongside a wonderful cast. As of today, he needs to be in the Best Actor conversation as a nominee. Spike Lee delivers an artistically unique and humanizing take on black Americans that has been needed in cinema for years.
I think that if you’re a fan of Spike Lee, then you’ll appreciate Da 5 Bloods more so because you’ll already be adapt to his artistic style. If you’ve only seen Spike’s more traditionally shot films like Blackkklansman, Inside Man, or Malcolm X, then you’ll have to prepare for something very different. For example, the first two thirds of the movie feels like a character study, while the last third of the film picks up in a more action oriented, climactic way. So you may want to stick with it until the end before giving up on it midway into the movie. It may not be a bad idea to also break the film up in two halfs. Either way, Da 5 Bloods is a solid watch and worth the viewing. Be sure to check it out on Netflix.